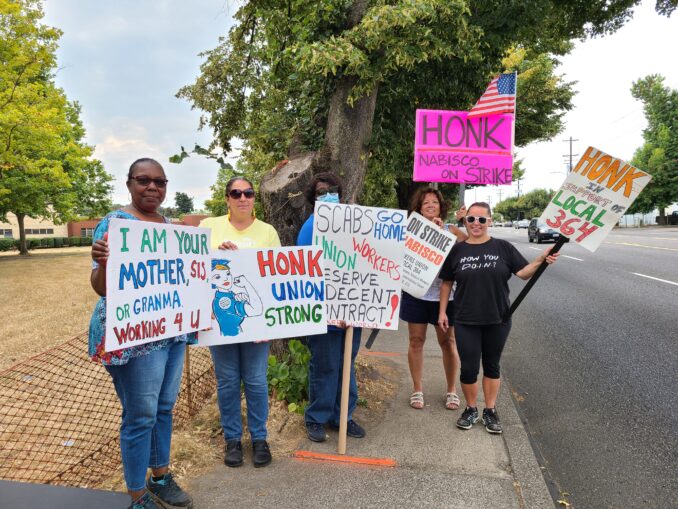 On the picket line with Nabisco workers in Portland.

Portland striking Nabisco workers are sustaining a bold picket line, taking shifts 24/7 in front of the dormant plant since Aug. 10. For nearly a month, local support has escalated for the Bakery, Confectionery, Tobacco Workers and Grain Millers Union. And every Nabisco facility in the U.S. has since gone out on strike: Chicago; Richmond, Va.; Aurora, Colo.; Addison, Ill.; and Norcross, Ga.

The workers’ message to Nabisco’s owner, Mondelez International, is clear: We deserve a decent contract; stop exporting our jobs to Mexico, and scabs go home.

Strikers are fighting to keep their contract and stop Mondelez from stealing their pensions, increasing their health care deductible to $4,000 and forcing workers to pull extra hours without overtime pay. Strikers say these cutbacks would cost workers thousands of dollars.

Mondelez hired Huffmaster, a strikebreaking company, to bring in scabs and intimidate strikers. On their website, Huffmaster advertised the need for workers at major national food producing facilities. They listed all the jobs that belong to the striking union members, offering many a higher pay rate than the workers got.

Community groups, members of dozens of other unions and seasoned racial justice protesters are leading the fight to stop scabs from stealing jobs. Huffmaster shuttles scabs to the Nabisco plant in buses and vans with tinted windows from hotels near the airport. Protesters have parked their cars at the Marriott to blast their horns and car alarms at scabs as they leave the hotel for the Huffmaster vans.

According to the Willamette Week, “On Friday, Aug. 20, protesters blocked vans and personal vehicles from entering an external parking lot eight minutes away from a building on Northeast Killingsworth Street,” a lot Huffmaster uses to load scabs onto buses and vans headed for the bakery. “Starting around 5 a.m., protesters blocked the driveway into the parking lot with their bodies for an hour. Eventually, cars and vans started turning around. Once those vehicles left, protesters rushed to the Nabisco facility and started slowly walking across the main vehicle entrance on Columbia Boulevard to impede swift entry.” (tinyurl.com/33ufu6a9)

On Aug. 24 as scabs left the plant, seven exits were blocked by protesters. One of the cars blocking a driveway was “changing a tire,” moving very slowly for over an hour. Mondelez has tried to deliver flour and sugar using the rail lines behind Nabisco so baking can resume. But supporter protesters camping next to the rail lines stopped the trains in their tracks.

Union railroad workers driving those trains backed up when they saw picketers on the lines. The Railroad Workers Union tweeted: “No contract. No snacks. Flour and sugar stays on tracks.” The union has refused to deliver at the Nabisco plant. (tinyurl.com/ewnajrec)

A striker told Workers World that for three weeks, when the shipment of flour and sugar to the Nabisco plant was stopped: “We hit them where it hurts. The flour became stale. We want to tell people they can help us by not buying stale Nabisco cookies and crackers.

Strikers said they are thankful for the constant stream of honking horns and power fists of support along their picket line. And they are “thankful for the growing outpouring of outside support from other unions, workers’ groups and community members.”

William and Joel, members of United Steelworkers Local 112M who work at the Owens-Brockway glass plant in NE Portland, were on the picket line to support Nabisco workers. They told WW: “It’s eerie how similar conditions at Nabisco are to those where we work. It’s the same playbook.

“The horrible changes in human resources, the same pressure tactics from management in their attacks on labor. Their greed is out of control.” Like Nabisco, their company has opened a new facility in Mexico and laid off 93 union members. “When we asked for our contract, they gave us no concessions even after laying off half our members.”

William said, “When I first started in the union, I didn’t understand how important the union was. Now our local has black-and-white photos on our wall of past strikes, to remind us of the gains the union has made for us.”

Another picketer who has worked at Nabisco for over a decade said, “I thought I had a good job here. I just want to be able to support my family.”

“Their greed is out of control,” said Doug, who has worked at Nabisco for 32 years. He was with Darrin, a retired worker at the plant, who chimed in: “By supporting the Nabisco workers, we are fighting for all workers’ jobs across the country. You can help us fight for our jobs by spreading the word — ‘Don’t buy Nabisco snacks.’”

You can help the Portland strikers by going to the GoFundMe page at tinyurl.com/4bparw9j.