Community organizations and family members of Erik Salgado, killed by the California Highway Patrol in East Oakland in June 2020, held a press conference here Aug. 16 to oppose plans to use the CHP to enforce traffic laws in Oakland. Oakland Mayor Libby Schaaf and California Governor Gavin Newsom have proposed those plans.

Held on the street corner where Salgado was killed, the press conference became a speak-out by family members and groups opposed to police murder and terror in this community. Their rallying call: “CHP out of Oakland.” 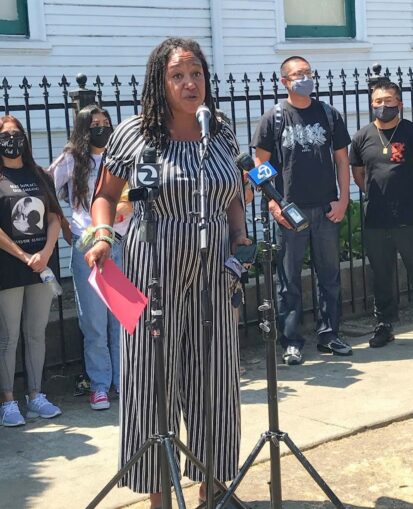 Cat Brooks opened by calling out Mayor Schaaf for bringing the Bureau of Alcohol, Tobacco, Firearms and Explosives; the FBI; and now the CHP into the city in the last three weeks. “As Black, Brown and Indigenous people,” she said, “we know that these law enforcement agencies do not mean safety for our community. In fact, they mean increased levels of violence and increased danger for our bodies.” Brooks is co-founder of the Anti Police-Terror Project and executive director of Justice Teams Network.

Brooks described the police attack on Salgado and his pregnant partner: “On this street corner, Erik and his girlfriend were in their car, when they were profiled, targeted and assaulted by the California Highway Patrol, resulting in the death of Erik Salgado and his unborn child. Libby Schaaf has done nothing to support that family and their quest for justice.”

Ben Wang, co-director of the Asian Prisoner Support Committee, explained why his organization is calling for “CHP Out of Chinatown; CHP Out of Oakland.” Wang described the education and advocacy his group has been doing for the past 20 years on behalf of Asian prisoners in California. “We do not want the mayor and other elected officials to divide us further. We know that more policing, more law enforcement, more mass incarceration does not solve any roots of the real issues,” Wang concluded.

Salgado’s sister Amanda Blanco said, “I am here, a year later, still fighting for answers for my brother’s case. . . . I am confused about why the request for more CHP, with blood already on their hands. . . . From Oakland to Hayward . . . there is already too much police presence.”

The coalition issued a press release which emphasized that removing the CHP from Oakland’s streets was a key demand of the 2020 uprising which was a reaction to the police murders of George Floyd in Minneapolis and Breonna Taylor in Louisville, Ky.