The following was excerpted from a July 29 webinar held by the Disability Justice and Rights Caucus of Workers World Party that emphasized the interconnections between the struggles of disabled people and incarcerated people. Caucus members participating were comrades Betsey Piette, Brian Shea and mYia X. The entire webinar can be viewed on YouTube at Workers World Party (youtube.com/user/wwpvideo) 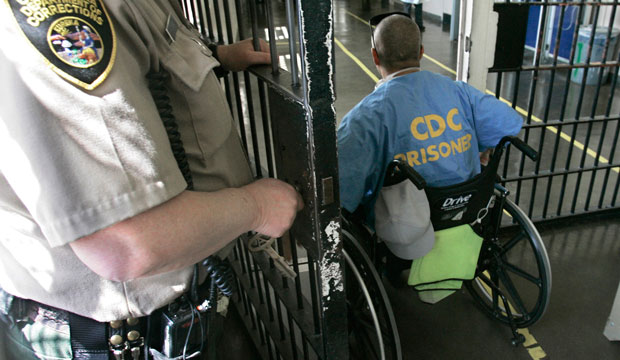 At the California Department of Corrections prison in Vacaville, April 9, 1998.
Credit: Rich Pedroncelli

Betsey: Capitalism creates a hostile environment for people with disabilities. Everyday language reinforces the idea that disabilities are negative, emphasizing the lack of health care, while at the same time labeling the cost to make daily life accessible to all as “prohibitive.” Disabled people are stereotyped as a drain on the economy, on other people and on life in general.

But when multibillionaires like Jeff Bezos spend untold sums of money to go to space for 10 minutes, that’s not seen as a “drain” on anybody. Except we know it means less food and health care, fewer homes and jobs for the rest of us, especially for the Amazon workers whose labor he profits from.

People with disabilities know that every day they survive under capitalism is an amazing day, a day full of challenges of all kinds, but another day of being with friends, families, comrades and co-workers.

Given this hostility, the effort by disabled people that got the Americans with Disabilities Act passed, 31 years ago, was an incredible victory. From a 54-day San Francisco sit-in to the famous Capitol Crawl in Washington, D.C., people with disabilities came out in numbers to demonstrate physically how difficult daily life is for disabled people.

Despite the historic concession from the ruling class in passing the ADA, enforcement remains elusive. Implementation of accessibility requirements is underwhelming in so many areas.

Brian:  The world can be accommodated. Meaning every part of the built society — which is every part of everything that humans have made — can be made to accommodate every part of the society. That’s what Marx meant when he wrote about the communist stage of society, which at this time is still aspirational but is what we in Workers World Party as a Marxist organization are reaching for.

And how we are reaching for it is by organizing — organizing amongst the most oppressed, marginalized workers, poor people, incarcerated people. In this capitalist society, everything — including health care and housing, everything needed to provide for yourself and your family — is commodified and limited. Even if, as with many disabled people, they haven’t figured out how to exploit our labor yet, they commodify us in other ways.

The struggle won the Americans with Disabilities Act; and some of the ADA is fine and good, but it’s ineffectual in a lot of ways precisely because it’s implemented within a capitalist economy and a capitalist society.

What’s more important was the struggle to win the ADA, which was waged relentlessly by people with disabilities.

Legislation: a snapshot in the class struggle

Brian: You can look at legislation as a snapshot in the class struggle. When the legislation is reactionary, it means we’re in a time when the struggle is getting pushed back. If the legislation is progressive, it was won by our class, by women, people of color. Even the recognition that people with disabilities have bourgeois rights was won by a titanic struggle that is still going on.

The heat of that struggle was in 1988 and in 1990, when there was the Greyhound bus drivers strike, when the Greyhound company was trying to bust its union, the Amalgamated Transit Union. The situation was driving the rank and file to put pressure on the union to take action, and they took a strike vote. Greyhound management was busting the union, and they were simultaneously signing on to the reactionary effort to stop the ADA, to stop them having to make their buses wheelchair accessible.

So some of us in the movement, in the party, were invited to speak on the ground to the local unions, to get them on record to endorse the proposals of the Americans with Disabilities Act. And to tell Greyhound management to back off. That was what was going on just before they took a strike vote and the bus drivers went out.

Then we blocked a lot of buses [driven by strikebreakers]. There were a lot of folks in wheelchairs blocking a lot of ground forces of the company.

mYia: When we talk about the elite and their access to health care, one of the prime examples is members of the U.S. Congress and how they get their health care for the rest of their lives. And we, the people, fund that. Yet every day at that Capitol, they debate and cut services that people need in order to live a better life.

mYia: This is a system that spends almost $80 billion a year to prop up mass incarceration and all its apparatus. What happens when we are disabled and behind the wall is that there is huge neglect; there is misdiagnosis; there is punishment, when you require treatment.

What happens behind the wall, and what happens out here? U.S. capitalism fails to provide care for the incarcerated and the disabled. According to statistics from the Department of Justice, people who are living with cognitive, intellectual and developmental disabilities are very prevalent behind the wall.

And immediately after arrest, you know what the system does — it literally strips people of their rights.

Through the ADA and a fight that continues to this day, we have seen a little glimpse of progression and access. But there’s nothing good to report about how the United States imperial system treats disabled or incarcerated people. We’re seeing how that is true right now with what we’ve endured in the pandemic of COVID-19, which has exposed all the disparities in health care.

We have to keep the struggle alive, to make sure that we don’t forget that we are one class, and that’s the working class and the class of our family members who are behind the wall, who literally don’t get any level of care.