Those were the sentiments expressed by former Uber software engineer and activist Eddy Hernandez at the strike organized by Rideshare Drivers United (RDU) July 21, designated as a day for app-based gig drivers in parts of California and around the U.S. to strike.

Over 100 striking drivers participated in a march, car caravan and rally, which began in front of Lyft’s San Francisco headquarters near the Embarcadero and ended at Uber headquarters. The drivers came from as far away as Sacramento, San Jose and the Central Valley to speak out against the corporate greed of the gig companies and to demand a repeal of Proposition 22. 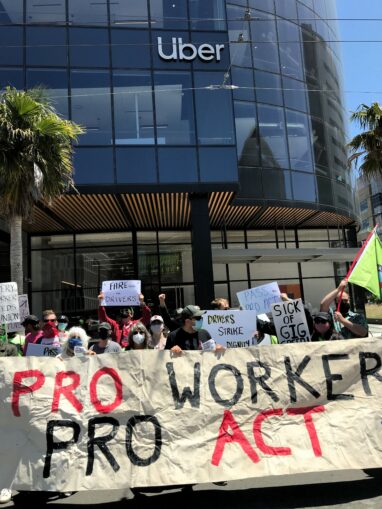 Proposition 22 — passed in November 2020 and funded heavily by the gig driving companies — legally classifies drivers as “private contractors,” rather than workers. RDU, which represents more than 30,000 gig drivers nationwide, began in Los Angeles and has been organizing for the right of gig drivers to be defined as workers, so that they have the right to organize unions. (tinyurl.com/bt4rntm8)

The strike also demanded passage of the PRO Act, which would expand union rights and make it easier for unorganized workers to unionize. Rallies and other actions were scheduled to take place in Los Angeles; Cleveland; Austin, Texas; Boston; Las Vegas; Baltimore and Denver. Cleveland drivers held their first RDU organizing meeting and voiced their grievances.

Gig drivers nationally were asked to turn off their apps and not work for the day. According to RDU organizers, many Bay Area drivers participated in the strike by doing just that.

Erica Mighetto, one of the RDU strike organizers, set the tone of the strike action: “We’re here today to send a message to Uber and Lyft that we will not be silenced. We are not less than a living wage, transparency, benefits and a voice on the job, just like every other worker in this country.”

At the rally in front of the block-long Uber headquarters, gig drivers, many of them immigrant workers, testified about the economic and social injustices faced on the job. “How can we be happy when we don’t have benefits like medical, dental and then vision,” said Ibrahim Diallo. He went on to compare the disparity of wages between gig and taxi cab drivers. Diallo concluded, “Uber is sucking the blood of the drivers.”

Driver organizer Ahmad Ibrahim Moss said, “We are fighting to protect our jobs, for the right to organize and for voting rights too.” Moss spoke for all the workers when he said, “We work to make the rich richer, but we should own it. We should own that damn building,” pointing to the Uber headquarters behind him.

RDU organizers were adamant in their determination to keep fighting for justice for gig workers. Mighetto said it clearly, “You know what? If these companies are going to steal from us and take our livelihoods, they can expect us to be banging on their doors all the time.”