The COVID-19 death rate continues to be high worldwide, especially as the virus ravages the developing world. A recent study reveals India’s death toll could be 3.4 to 4.7 million people, with the official death toll of 414,000 being a vast undercount. (Center for Global Development) 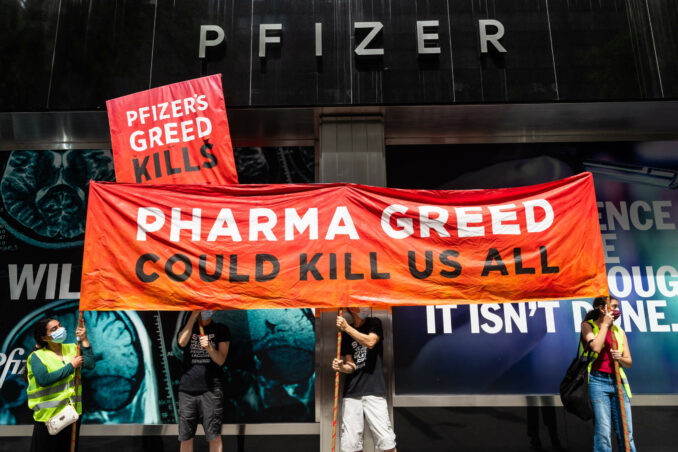 The lack of access to lifesaving vaccines, from Latin America to Africa to the Middle East and Asia, is the main reason for the pandemic continuing to spread. It’s a case of western pharmaceutical companies — Big Pharma — making fabulous profits because of their monopoly control. The oppressed working masses of the Global South are still being largely denied, months after an April World Health Organization (WHO) report of 87% of the vaccines going to wealthy nations with only 0.2% to developing countries.

In New York City, demonstrators marched on Pfizer’s world headquarters and blocked traffic July 14. They demanded that the imperialist company end its patent restrictions on the COVID-19 vaccine and instead expand its availability across the globe.

Seattle City Councilperson Kshama Sawant sponsored a similar demonstration in front of the Bill and Melinda Gates Foundation in May. Sawant and protesters called out Big Pharma and the Gates foundation, who with President Joe Biden’s support, are blocking intellectual property (IP) waivers for formerly colonized countries. Similar protests are being held around the world.

Big Pharma corporations have racked up huge fortunes from the pandemic. Pfizer is expected to make $26 billion in annual sales for its vaccine, and Moderna $19.2 billion. (Reuters) Meanwhile 85% of the world’s countries aren’t expected to be fully vaccinated until 2023.

It’s hard to imagine a single event that could make a stronger case for international cooperation than a global pandemic. Instead the crisis exposes the irreconcilable conflict between the needs of the masses and the profits of the few.

At the beginning of the pandemic, it was hoped that the world would unite against the virus. Public health leaders thought that the immensity of the pandemic would override a global drug system based on market monopolies. Governments spoke of shared interests. Drug companies pledged nonprofit approaches.

In March 2020, a plan was created inside WHO to set up a Technology Access Pool or C-TAP; C-TAP would create a voluntary intellectual property pool. In opposition, Bill Gates launched a bold bid to overturn C-TAP. Gates’ initiative was called ACT-Accelerator; Accelerator committed to respecting exclusive IP claims for the drug companies.

Gates was able to outmaneuver the WHO, based on his being a so-called “wise leader” — along with being worth $130 billion. He dismissed many warnings that there would be a crisis of supply and deprivation, and he blocked all challenges to his authority.

Gates’ dedication to IP rights is related to his control of Microsoft. He wants control of the world’s data — an extremely valuable commodity. The Gates Foundation is deeply invested in Big Pharma, including Pfizer. It owns shares of the German company BioNTech, having invested $55 billion in 2019, along with $52 million in CureVac, another German company. They’re also shareholders in Vir Biotechnology. With no shame, stock pickers say these companies could be winners for Gates and company. (The Motley Fool)

On May 5, the Biden administration reversed its position and came out in support of an IP waiver after intense pressure from over 100 nations. The next day the Gates foundation relented and came out for a “narrow IP waiver.” But Germany remains in opposition inside the World Trade Organization, the decision-making body. Demonstrations have targeted German Chancellor Angela Merkel.

In contrast to big pharma profit-making, Peoples China and Cuba have advanced public health through socialism. China expects to produce over 3 billion vaccine doses this year and is the main supplier to many developing countries. Likewise, Cuba has produced its own vaccine and has sent medical brigades in solidarity to fight the pandemic to many countries worldwide.