The big front page news July 24 was the new name of the city’s Major League Baseball team: the Cleveland Guardians. The “Cleveland Indians” and their despicable mascot — a racist caricature known as “Chief Wahoo” — had finally found their rightful place in the dustbin of history. 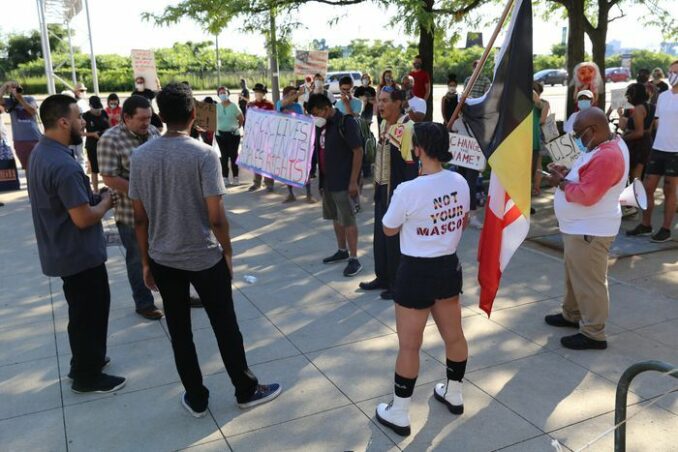 For decades Indigenous activists and allies protested outside home games, demanding the team scrap its mascot and change its name. For decades team owners were intransigent, citing “tradition.” In 2018 they announced that the offensive logo would no longer appear on player uniforms — but merchandise bearing the image was still sold.

Only last year was it announced that the process of choosing a new name would begin, and the mascot would be retired.

New logo of the Cleveland Guardians

The new name gives a nod to Cleveland’s iconic landmark, the “Guardians of Traffic,” that adorns the Hope Memorial Bridge. The bridge, named for an English immigrant stonemason who worked on the art deco statues, spans the Cuyahoga River connecting the East and West Sides.

However, the new team name represents an appeasement of backward-thinking fans who strongly opposed the change. It was chosen in part because it contains the same last five letters of the old racist name. The new logo retains the original script font and color scheme. The fans — who came to games wearing face paint and headdresses, referred to their team as “the Tribe” and let out “war whoops” when a hit was scored — represent a major source of profit for the owners.

Cynthia Connolly, a member of the Lake Erie Native American Council, welcomed the new name but explained that many Indigenous Clevelanders won’t become overnight fans due to “over 60 years of trauma and torment that we’ve been dealing with.” The Council, the American Indian Movement, the Committee of 500 Years of Dignity and Resistance and the Lake Erie Chapter of the American Indian Science and Engineering Society comprise the Cleveland Indigenous Coalition, which pressed the team owners to drop the offensive name and mascot.

Now is the time for each and every professional, college and high school sports team — starting with Atlanta’s baseball and Kansas City’s football teams — to end their racist traditions of degrading Indigenous people with hateful names, mascots and fan rituals.