Based on remarks given at a June 28 leadership meeting. Holmes is Workers World Party’s First Secretary.

The Teamsters union, the third or fourth biggest union in the United States, overwhelmingly voted at its convention June 24 in favor of launching a nationwide campaign to organize the nearly 1 million Amazon workers in this country.

It’s a clear indication to the working class, capitalist class and labor movement that the union drive in Bessemer, which ended in defeat several months ago, was merely the opening shot of a new epoch of class struggle. Taking on Amazon is a matter of survival for the Teamsters and several other unions. This includes the post office workers and perhaps a couple of other unions, because the growth and  influence of Amazon is decimating unionized workers in transportation, one of the Teamsters’ main union bases. 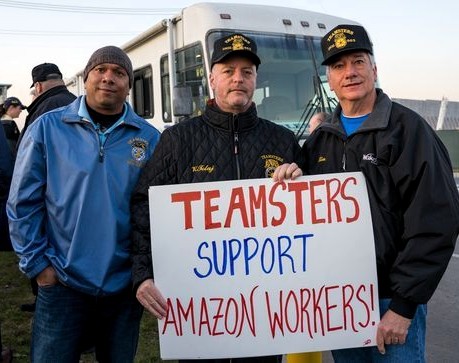 In fact, Amazon’s expansion is an existential threat to unions, period. This is why everybody was watching the Bessemer vote so closely and waiting to see what would be the next shoe to drop. Well, the shoe dropped a few days ago at the Teamsters convention.

The larger question is whether militants and revolutionaries, along with the most advanced workers whether they work at Amazon or not, can turn this struggle to organize Amazon into something that transforms the political and social character of the entire working-class movement.

Can the coming struggle — the one that pushes back against the nonstruggle, business unionism so prevalent in the labor movement, the top-down instead of rank-and-file approach that is equally prevalent, class collaboration, narrowness, competitiveness, fragmentation, pettiness, conservatism and the idea that it’s okay to have union-busting cops in the labor movement — start to break up labor’s dependence on the capitalist political parties? It’s something that has frustrated the inevitable reawakening of an independent, revolutionary working-class movement.

Most of us have been waiting for such a transformative development that would help the coming workers’ upsurge and change the dynamics of the entire global class struggle that has favored the class enemy.

Certainly, there are many questions. How can we prepare ourselves for the fight to make this struggle to organize Amazon a fight that includes the entire working-class movement: the organized and the unorganized, the students and youth? The oppressed youth? The left organizations, the LGBTQ2S+ movement, the migrant workers, the women’s liberation struggle, the Black Lives Matter movement?

How can we turn the struggle to organize Amazon — this global behemoth that in so many ways epitomizes 21st century technologically advanced capitalism in a profound state of decay — into a truly worldwide class struggle unlike anything the world has seen before?

This is the natural potential of a struggle to organize a global corporation like Amazon.  But that’s not enough.

Open up a political struggle

These are some of the challenges facing those who want to participate in the reconstruction of a new working-class movement, something that would constitute a giant step down the road to socialist revolution, and an end of the dangerous and dying capitalist system that threatens all life on the planet.

The point is workers assemblies, workers councils, and on whatever other basis we proceed, what I’m putting forward is a broad political view that involves and encapsulates the whole working class — the transformation of the working class.

It’s necessary to have a micro-vision of how you organize from the bottom up, beginning in the Party, but you also have to have a vision of what you want for the entire working class. And that vision has to be based on larger developments in the working class, like the question of Amazon and what the Teamsters voted to do on June 24.

We cannot know how the struggle to organize Amazon will unfold.

There are a number of other struggles such as to stop massive nationwide evictions; the moratorium on evictions is coming to an end. This struggle, which we’ve got to pay attention to, can be a catalyst for the transformation of the working class. That Amazon struggle, in and of itself, is distinctively important for a lot of reasons, but that isn’t necessarily going to be the first transformative struggle — not at all; and we would have a linear, inadequate vision to look at it that way.

What will be the approach of the Teamsters union? Their call for militant tactics such as coordinated strikes, meaning strikes in several places, walkouts and militant mass protests in the streets is both welcoming and promising, as is stating that they’re not going to rely on a NLRB election, which was the case in Bessemer.

But will the Teamsters form real trusting alliances with other labor unions? There’s a lot of unnecessary competition in the labor movement, which is a relic of conservatism and fragmentation and bourgeois politics, which has to be fought.

Will they work with important regional forces, like the Southern Workers Assembly, which has working committees inside several Amazon facilities in North Carolina and even other places now. Will they work with militants who are organizing an exciting union campaign in the biggest Amazon warehouse, in Staten Island, New York?

These questions are not just for the Teamsters alone but for every union, every worker — whether they’re in a union or not — every communist, every socialist, everyone who wants to help transform the working-class movement from its present state into a revolutionary force.

These are serious questions; they are as important as any other strategic questions. In my humble opinion, the stakes for the future of our class could not be higher.

It can happen at one of the big Amazon facilities in Southern California — where there’s a whole complex of Amazon warehouses in Southern California. But there’s tens of thousands of workers, most of them African American. It could happen in one of the Amazon facilities in Raleigh, N.C.; it could even happen in the Amazon warehouse in Bessemer where there was the union drive a few months ago.

When it does happen, it will do something that even a union drive can’t do because it will be a militant action. I’m talking about a walkout or an occupation or a strike. It’s going to be a dynamic chemical reaction throughout the entire working class that emboldens workers everywhere, not just Amazon workers and transportation workers and logistics workers, but Uber drivers, gig workers, incarcerated workers, trans workers, sex workers and the unemployed.

However, it’s critical that we understand that the full revolutionary transformative potential of what is going to unfold cannot be realized if revolutionary forces stay on the sidelines.

The time has come to put aside all doubts, all cynicism, pessimism — there was a lot of pessimism after the vote in Bessemer. And that’s understandable. And that affected not just us, but everyone. But that’s the reason why you have to have a long-range view and a deeper understanding of what’s happening. And it will be a test to see if the Party and other forces can rise to the occasion.

If we meet the challenge, it will change the dynamics of the global class struggle. If we understand the seriousness and scope of this task, one of the first things we must do — and this is on the basis of recent experience, but also long-term experience, consistent with deep organizing and the goals of deep organizing — we have to be part of a campaign to educate the working class, as well as those in the political movement that are in or as distinct from the working class, whose development is not yet limited by bourgeois and petty bourgeois ideas and politics that sometimes make it difficult if not impossible for some activists and some groups to evolve beyond where they are. Nothing is more critical in the coming period than working-class consciousness and working-class solidarity.

It creates a big obstacle for workers to even be caring about or being interested about the plight of workers in another country or even in another city. The dearth of solidarity, the absence of it, when it’s weak, then workers don’t care, and there is no basis to call for solidarity on any basis, regionally, countrywide or on a national basis.

Many times we hear and sometimes we initiate classwide calls for a general strike. And many times these calls are seemingly ridiculous, because they don’t seem realistic. They’re not new at this point. Usually, it’s clear that unions are not going to react to them. Some may say, understandably, why bother? And that’s a good tactical question.

But there’s another question in this, and I’m not saying that we should be calling for general strikes more than we are; I understand the problems. But if you don’t even do things, both in your tactics and strategies, that call on workers to care about, know about or be informed about (much less support) workers fighting back in another part of the world, then how are we going to rally the working class to global class solidarity, to a higher level of class coordination?

This is what the Comintern was all about when they founded it, a few years after the Russian Revolution in Moscow. This is what the first section of the Communist Manifesto is dedicated to in part; there are other important things in there, too. It’s how the deepening and widening of the coordination of those organizations that represent the working class, beyond geographical boundaries, is the key to worldwide socialist revolution.

Trust me on this: The notion of classwide coordinated struggle is going to become more important in the coming period. And it’s going to be more important than most of us realize. It’s in fact going to be integral to how the working class develops, with globalization and the far more complex supply chains that are now a distinctive feature of global capitalism today.

Consequently, while the workers who work for Amazon are absolutely central to the struggle to organize Amazon, workers who never worked for Amazon, and who may never work for Amazon, are today in a much greater position than at any time in history to play a role in defeating Amazon’s union busting — in the same way that workers in Rome are going to play an important role in supporting workers in Staten Island.

Once again and finally, the conscious and bold intervention of revolutionary forces like us is a necessary ingredient for this potential.