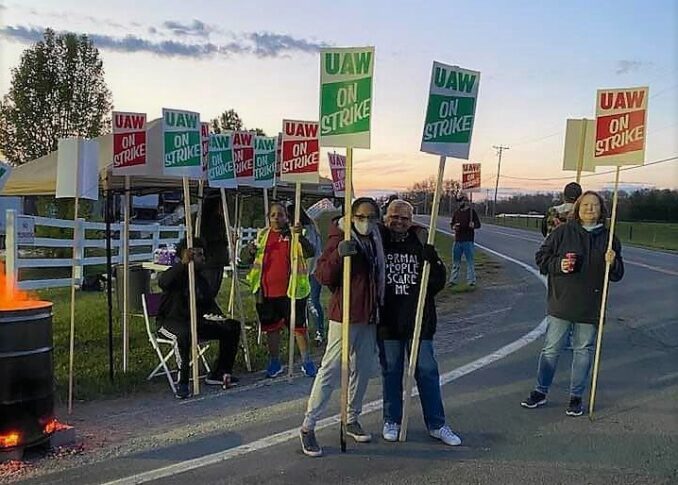 Members of United Auto Workers Local 2069 are returning to work after striking Volvo Mack Truck on-and-off since April 17. The 2,900 workers in the small town of Dublin, Va., had voted to reject three unacceptable contracts, twice with 90% voting no and the third time with 60% against.

After rejecting the most recent tentative agreement July 9, they were given the same contract as “last, best offer” for a second vote July 14, when it passed by only 17 votes.

Volvo’s truck division has made record profits, and workers wanted to get back some of what they gave up in previous contracts. They wanted to uphold the basic principle of “equal pay for equal work” and eliminate two-tier pay. This onerous system, widespread in UAW plants, means lower seniority workers make less money and/or receive inferior benefits compared to higher seniority workers doing the same jobs.

Other issues for workers were increases in what they would have to pay for health care coverage — which would eat away the negotiated pay raises — and language allowing Volvo to put them on an oppressive “alternative work schedule” and eliminate overtime pay for work after an eight-hour shift.

Unfortunately the strikers did not have the solidarity of their union leadership at either the local or International level. Before workers even viewed the first tentative agreement, the UAW International called off the two-week strike. After the resounding no vote, the International nevertheless kept Local 2069 members on the job. The strike resumed June 7 after the second rejection of a nearly identical contract.

After the third turndown, Volvo management threatened workers with firing if they did not cross the line and return to work. The company said it would deny workers a $2,000 signing bonus, if the contract failed in the repeat vote.

Legally, striking workers can be permanently replaced in an economic strike, but not in a strike over unfair labor practices. Union members filed ULP charges against Volvo with the National Labor Relations Board, hitting the lines with new “Unfair Labor Practice” strike signs. Only a couple dozen workers crossed the line.

The surrounding community, along with UAW members around the country, expressed solidarity with the strikers. But without the support of their union leadership, rank-and-file workers were not able to push back all the company demands.

By the end of the new six-year contract, every worker who now has at least one year seniority will make top pay — but not future workers or workers with less time. Health care costs are going up. Language on work schedules, which the UAW leadership claims “provides protections around shift scheduling and plant operations,” is seen as too vague. (uaw.org)

In 2015 Fiat Chrysler workers, including this writer, were promised that the contract they were asked to approve would help eliminate alternative work schedules. Six years later, workers at the plant I retired from are still working 10-hour days and weekends for straight time, or close to it — a bonus for the company. Former UAW Vice President Norwood Jewell, who pitched the contract, was sentenced to prison for taking bribes from FCA.

Now that the Volvo strike has ended, many rank-and-file workers have joined the “One Member, One Vote” campaign to let the UAW membership elect International officers directly. Local 2069 strikers had won the support and admiration of the Unite All Workers for Democracy caucus of the union, a staunch advocate of direct elections.