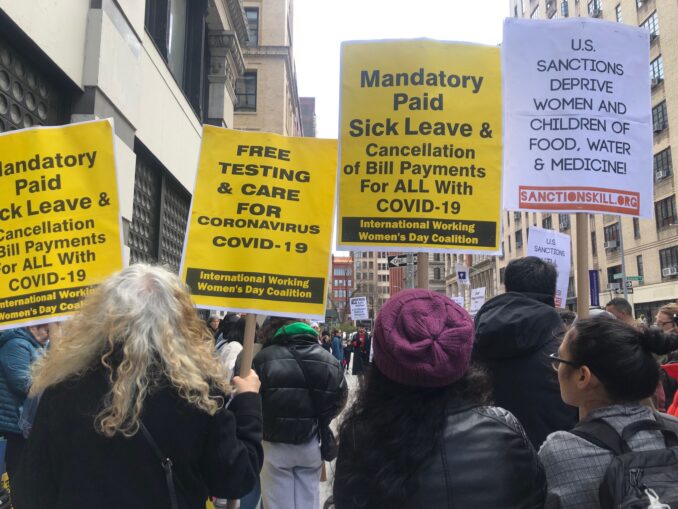 Is the COVID-19 virus on the way out? Is the U.S. government taking appropriate steps to eliminate this disease?

To even begin to answer these questions, the first fact to understand about the COVID-19 pandemic is that pandemics affect everyone in the world. All parts of today’s world are interconnected by the globalized economic supply chain. Only by eliminating the virus worldwide, as was done with smallpox 40 years ago, will everyone be safe from the disease, which has already killed 4 million people and disrupted the world economy.

Once COVID-19 spreads in any population anywhere in the world, variants of the virus will arise. Any dominant variant will eventually reenter those countries that have vaccinated their population. Thus, people in the imperialist countries, mostly in North America and Europe, whose leaders have monopolized possession of vaccines to the detriment of poorer countries, will still be vulnerable.

U.S. imperialism’s political leaders serve the interests of the giant transnational monopolies, protecting and increasing their profits. Because of this, they are ill-equipped to guide the world or even the country out of this COVID crisis.

The drive of the imperialist governments to protect so-called intellectual property rights through enforcing patents is in direct contradiction with the need of humanity for access to lifesaving technology, in this case access to vaccines. The leaders of the imperialist world prioritize the profits of Pfizer, Moderna, Johnson & Johnson, et al, above the need to quickly maximize the production, shipment and delivery of vaccination jabs.

Capitalist states uphold the “intellectual property” of the monopolies, even though government funds financed the development of the vaccines and often government laboratories have developed and tested them. This is to protect the profits of the pharmaceuticals, whose owners are part of the ruling class.

China, on the contrary, whose priority is not protecting capitalist profits, has offered to share its technology and aid other countries in producing any of the seven vaccines it believes are effective in countering COVID-19. Its own production has reached 3 billion doses this year and is expected to reach 5 billion next year. It has been vaccinating 20 million people in China a day and expects to have inoculated the entire adult population by the end of 2021, even as it has become the main supplier of vaccines to other countries, especially in Asia and Latin America.

In delivering vaccines and organizing public health measures in the U.S., any inequalities in service — besides causing needless suffering and death among those discriminated against — contradict the attempt to develop general “herd immunity” to wipe out the disease in all its variants. That the corporate media publishes contradictory information about vaccine effectiveness hurts efforts to control the virus.

Equality and solidarity are themselves weapons in the struggle to control, contain and eliminate the disease, and capitalist competition is an enemy of the people and a spreader of the virus.

On July 4 the Biden administration celebrated what it considered its success in combating COVID-19. By that date, two-thirds of the adult population of the U.S. had received at least one dose of the vaccine, only a few points short of Biden’s 70% goal. Compared to the anti-scientific approach of the prior administration — which poisoned the attitudes of a large section of the population and contributed to the death of hundreds of thousands of people — the Biden approach seemed intelligent.

It was a low bar for comparisons. The Biden group as well as the Centers for Disease Control and Prevention faced the pressures of the ruling class to reopen economic activity sooner rather than later. What followed was the government’s rapid abandonment of precautions meant to slow the spread of the disease, precautions that had at least taken root in parts of the country. There is ruling-class pressure to abandon supplementary unemployment payments, which have allowed workers to avoid working in dangerous conditions.

The government and CDC advice has led to dropping much of the effort to mandate mask-wearing — simple for most people — and more confining measures, such as restricting large gatherings or mandating social-distancing in indoor events. In parts of the country where vaccination rates are low, new COVID-19 cases and deaths continue.

Making vaccines safely accessible to everyone is necessary. This includes all migrant workers, who must face no negative consequences based on their immigration status. Also necessary is outreach, education and easy geographical access to get doses — which now exist in quantity within the U.S.

Zigzagging on these questions by the government will give an opening for the Trumpites — who are opportunists and will seize any question that can be used to discredit their Democratic Party opponents.

The lesson of all these points is that the capitalist organization of society, prioritizing competition among the people and maximizing profits for the monopolies, makes monopoly capitalism incapable of handling and controlling global crises such as that brought about by COVID-19. It is one more reason to fight for a socialist world.