July 12 — Today the capitalist media have turned their focus on anti-government demonstrators in Cuba, which the New York Times claimed to number in the “thousands,” in a country of 11 million people.

How many thousands, if there were really that many, isn’t stated (nor were there any videos of such-sized crowds), but in any case this represents a small percentage of the population who reportedly blame the Cuban socialist state for shortages of food and vaccines. By comparison, 28 million people in the U.S. are estimated to have taken part in the Black Lives Matter upsurge following the lynching of George Floyd.

Nevertheless, the number protesting in Cuba is treated as something “astonishing for a country that limits dissent.” (New York Times, July 12)

Yet on July 12, The Independent reports a measured response on the part of Cuban police: “Police began detaining people about 2½ hours into the protest in Havana after some started pulling up cobblestones off the streets and throwing them at police.” About 20 were taken away in police cars and other vehicles.

The U.S. is rarely excoriated by the media for “limiting dissent,” despite numerous arrests, assaults and even killings of protesters by police last summer, and despite 34 state legislatures considering bills that drastically curtail the First Amendment right to protest.

The anti-Cuba bias is manifested in another way: the media’s failure to address the root cause of the shortages of necessities faced by the Cuban people. It is the six-decade-old U.S. blockade, tightened multiple times by the Torricelli Act, the Helms-Burton Act, and more recent moves by the Trump administration that President Joe Biden shows no signs of ameliorating. This web of restrictions under the blockade regime prevents countries from trading with Cuba if they seek trade relations with the U.S. 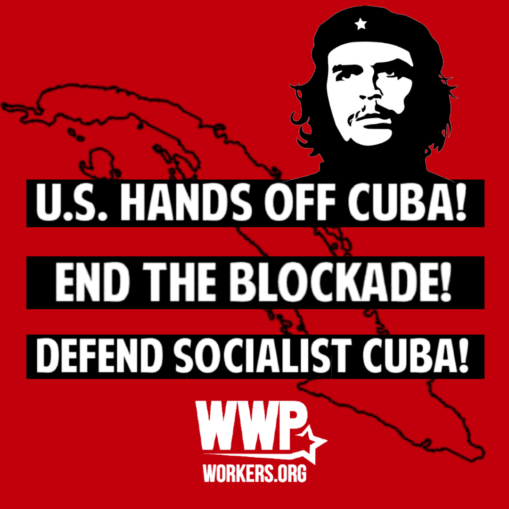 As Cuba stated to the United Nations before a June 23 vote on ending the blockade: “In the last four years, the Government of the United States has added more than 240 coercive measures against the Cuban people and its Government which remain in effect. These measures are not mere actions to tighten the embargo, but new methods, some of them unprecedented, that have escalated the economic war against Cuba to extreme levels, as seen in the shortages that are part of daily life for every Cuban.” (misiones.minrex.gob.cu)

Only the U.S. and the apartheid state of Israel opposed the resolution, which for the 29th time left the U.S. isolated on this question, with 184 countries voting to end the blockade.

A prime example is an issue reportedly driving the protests: lack of access to COVID vaccination. Under the blockade regime, U.S. pharmaceutical companies cannot sell vaccines to Cuba, but Cuba has developed its own vaccines against COVID-19. Both Abdala, and Soberana 02 in tandem with Soberana Plus, show an efficacy rate of over 90%. The vaccine research has not generated one dollar in profits; all of it was conducted for public good under Cuba’s socialized health care system.

Yet Cuba needs syringes to administer the vaccine! And, due to the U.S. blockade, the country cannot buy them from its neighbor 90 miles away. Cuba solidarity activists in Canada and the U.S. have launched a campaign to raise funds to make up for a shortfall of 20 million syringes. (ghpartners.org/)

This is but one example of the innumerable hardships imposed by the blockade that affect every aspect of life, from food production to medical care to combating climate change. Difficulties have been compounded by the pandemic, which in Cuba like everywhere, has made it unsafe to perform many necessary jobs.

The U.S. blockade is essentially an act of war aimed at destroying Cuba as a beacon of socialist construction and revolutionary internationalism.

Cuba has charged the U.S. with instigating the protests, and Cuban President Miguel Díaz-Canel Bermúdez called on the people to come into the streets. “We know that there are revolutionary masses confronting anti-revolutionary groups. We will not accept that any mercenaries and sellouts of the U.S. empire will provoke destabilization in our people,” said Díaz-Canel Bermúdez.

Late on the night of July 11, multiple videos were posted on twitter by Cubans of thousands of revolutionaries taking the streets in Havana and around the island, chanting “I am Fidel.”