There is no greater proof of genocide than the systematic theft and killing of the children of a people.

The governments of the U.S. and Canada stand criminally indicted of genocide after the renewed revelation in late May of the deaths of thousands of Indigenous children at state-run, state-authorized “boarding” and residential schools. 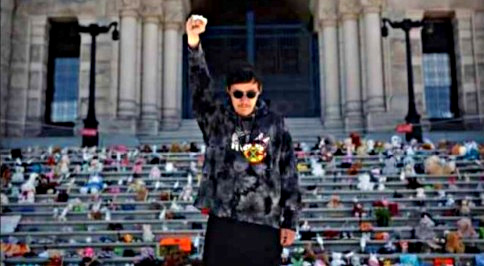 Though events are still unfolding, the total of recently identified graves in the U.S. and Canada stands currently at over 1,300. But even Canada’s 2015 Truth and Reconciliation Commission concluded that at least 3,200 children died at the residential schools during their operation from the late 1880s through the 1990s. (caid.ca/TRCFinVol42015.pdf)

In the 21st century, spokespeople for the colonizing countries keep expressing surprised “sorrow” at the news of the dead children. But First Nations and Indigenous peoples know that genocide was the official aim all along.

On May 28, when Chief Rosanne Casimir of the Tk’emlúps te Secwépemc First Nation confirmed at least 215 graves of Indigenous children were at the Kamloops Residential School in British Columbia, she said what the nation called “the knowing” about missing children generated the search. Her mother and grandmother had shared stories of abuses at the schools. She told the Toronto Star: “It’s our history, and it’s something we’ve always had to fight to prove.” (May 28)

In the U.S. and Canada for over a hundred years, Indigenous and First Nations children were kidnapped from their families and communities into state-funded, sometimes military-run, Christian schools. They were forcibly converted to Christianity, physically beaten, sexually abused, traumatized by having their hair cut short and tortured for speaking their own languages. Thousands died from malnutrition, illness and broken hearts. Children who were still with their people lived in perpetual fear that “they will come and take you away.”

The war on the children was part of overall all-out war by colonizers on Native peoples throughout the North American continent — using strategies of subjugation, segregation and assimilation that included physical genocide, land theft, exile and cultural genocide.

This war on children was unmistakably, undeniably a policy of the colonizing state. The most infamous “school” for Indigenous children in the U.S. — the Carlisle Industrial School in Pennsylvania — was established by Capt. Richard Henry Pratt, who served for 30 years as both a U.S. Army officer and the school’s superintendent.

The colonizing states of North America came into existence through the genocide of Indigenous peoples. The “apologies” offered by the states now are meaningless. Note the bitter fact that the U.S. apology was a general resolution stuck into the 2010 Defense Act by Congress. It described genocide mildly as “instances of violence, maltreatment, and neglect.” It was brutally clear: Nothing in the resolution “authorizes or supports any legal claims against the U.S., and the resolution does not settle any claims.” (indianlaw.org/node/529)

Ongoing crimes against Indigenous peoples continue — from polluting pipelines across traditional lands to seizure of Indigenous children from mothers at birth through the ploy of declaring the mother not fit for care, along with an epidemic of missing and murdered Indigenous women, girls and Two Spirits.

The practices of settler-colonialist genocide by the state have never ceased; they are simply carried out differently.

And the resistance of Indigenous and First Nations people to genocide has never ceased. Ronalee Lavallee, a student at one of the Canadian schools in the 1960s and 1970s, recalls that many students who spoke Cree would spend their nights secretly teaching the language to others. (Washington Post, June 24)

Above all they are demanding land reparations: Land Back! This includes regaining First Peoples’ homelands; stopping environmental devastation; assuring all communities have clean water, adequate housing and health care; protecting sacred places to steward the environment on this continent; and the power to say no to projects, plans and policies that affect the people and their lands.

In a June 3 article in Indigenous Climate Action, Eriel Delanger sums up why these demands are needed: “So we can heal on the land, and begin to repair the deep wounds of disconnection from our human and non-human kin. It needs to be affirmed that we are people of the land, and that our language, our culture and our identities are connected to these places our parents and grandparents were ripped from. We need Land Back.” (tinyurl.com/3u3wtjwr)

Bring them home! Land back! Reparations!