The author is a Colombian political analyst living in Spain. The article was first published in lapluma.net. Translation by Michael Otto.

June 17 – Iván Duque, the Colombian president, has confronted the current protest movement with the same methods used by previous rulers of this Andean country, albeit with less intelligence, bringing him more defeats than victories. 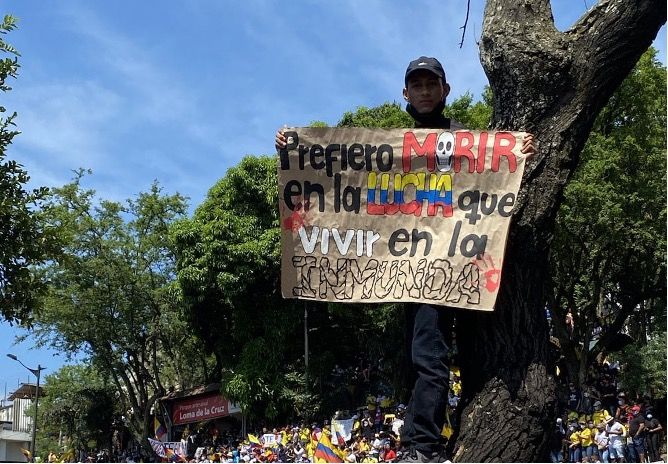 ‘Better to die in the struggle than live in the filth.’ Cali, Colombia, May 1.

It is traditional in Colombia that when confronting social and political opposition movements, the authorities typically engage in dragged out and useless negotiations (and what they agree to, they never fulfill). At the same time, the police and military, backed up by paramilitary groups, employ brutal and murderous repression in obedience to a systematic extermination plan.

Apparently, the government has no plan beyond the traditional one, resulting in an impressive plunge in support, according to various polls that measure popular opinion. Duque has had to accept the resignation of several high-ranking officials (including two ministers) and has been unable to cover up dramatic scenes exposing government repression — leaving his crimes exposed before national and international opinion.

Of so-called Colombian democracy, only a memory remains. In spite of the official version that insists on presenting this country as “the oldest democracy on the continent,” the harsh repression shows Colombia looking more like a dictatorial regime and, for many, like a colonial form of fascism.

Duque and his government are apparently betting on wearing down the protests and on the normal public exhaustion. They paint themselves as a responsible government that listens to popular outcries. All the official propaganda (repeated ad nauseam by the mass media) seeks to convince the protesters that it’s futile to fight the power.

The government systematically delegitimizes mass demonstrations, even if they are peaceful. It criminalizes barricades, roadblocks and other forms of protest, and condemns the response of those who are repressed without restraint. The government’s strategy boils down to offering negotiations with no perspective whatsoever and violence out of all proportion, leaving a dramatic toll of dead, disappeared, wounded and detained that is reaching an unprecedented degree not seen in decades.

After more than seven weeks of resistance, the Strike Committee announced changes in its tactics of struggle and proposed greater and more forceful actions in the immediate future.  But some collectives distinct from the Committee say they will maintain their actions in spite of the enormous risk to their lives amid a scenario of a partial military occupation of the country, which the government threatens to extend to the entire national territory.

In fact, it’s a military coup “Colombian style,” since the legal formalities are maintained without abandoning extensive repression and without renouncing the systematic extermination of those who persist in protesting. The worst military dictatorships of the Southern Cone did the same thing, and in many respects, today it’s even worse.

In such circumstances, what should be the immediate tasks to take stock of what has been won, to correct the failures, to maintain the mobilization and to anticipate the battles of the future?

To begin with, there is an obvious need to effectively coordinate the different citizen voices that are part of the protest. It is a matter of creating mechanisms of joint action between the various collectives and organizations which are part of the Strike Committee to combine with the multiple expressions of popular protest in urban neighborhoods, rural peasant roads and neighborhood communes (the so-called First Line, for example).

These groups don’t function with a traditional chain of command, the usual bureaucracy and formal administration of the processes (as labor unions do, for example). Their demands are legitimized through various forms of people’s assemblies, in which the people exercise spontaneous and  direct democracy.

In reality, this double aspect of social mobilization is not a phenomenon unique to Colombia. Nor is it new, since it appears in practically all protest movements that reach a certain size, especially when they are the result of unbearable living conditions for the majority of the population. It is a question of societies characterized by material poverty, social discrimination and very limited forms of political participation.

[The above dynamic] completely erases the legitimacy of the established order, as has just occurred in Chile, a highly regarded model of the neoliberal system, which has collapsed. Chile is preparing to replace the constitution inherited from Pinochet’s military dictatorship, which is still in force.

The Chilean example is a good reference to consider because of its similarities with Colombia. [The peoples of the two Andean countries are historically linked.] Traditional forms of organization (unions and parties) coincide in the socio-political mobilization with a fresh and vigorous force of spontaneous forms committed to the common struggle.

In addition to the construction of mechanisms to coordinate the struggles, it is fundamental that the Colombian movement make advances in formulating a common program. This program would gather the diverse demands and give them due priorities, distinguishing what can be achieved immediately from what reforms are only viable in the medium and long term, always judging by the correlation of existing forces and those that might be generated.

It is also pertinent to consider that, in so many cases, the reforms sought depend on their very nature. Some can be carried out immediately, but others may require several generations with a very firm social purpose and an almost heroic commitment.

Industrializing the country is one example. To overcome its current condition as a [dependent] expendable economy — a simple supplier of raw materials and cheap labor to metropolitan economies — is not something that can be achieved without great sacrifices. Radically changing the economic model demands an adequate balance between spending and investment. There would also be a corollary maximum reduction of certain consumer goods, even an elimination of some, in order to generate the necessary resources.

It is also necessary to overcome the current neoliberal culture, that social Darwinism that promotes above all a fierce and uncaring individualism. This is another of the tasks that a real transformation imposes as necessary and that can only be achieved through new education and new social practices that are only slowly taking hold.

These two examples show how indispensable it is to advance in the formulation of a program of reforms that gather the majority yearnings of the population but that at the same time have a high dose of realism, that correspond in their application to the real correlation of social and political forces.

That this process might allow the movement to turn the human tide of the moment into a decisive force at the polls next year (parliamentary and presidential) must be a decision as consensual as possible, overcoming sectarianism and various weaknesses. The human tide that is seen daily defying death in the streets and in the public squares could pursue paths other than electoral ones (for example, an indefinite national strike), but only if its goals are realistic and practical and not wild adventures. For dreams, there will always be time. Those who are leading the struggle on the Front Line and within the Strike Committee are facing a great challenge.