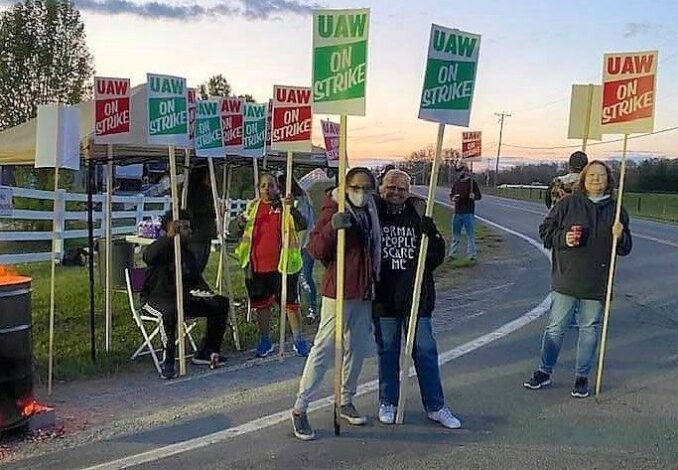 United Auto Workers Local 2069 workers at the Volvo Truck plant in Dublin, Va., are back on the picket lines after rejecting the second tentative agreement negotiated between the UAW and the Volvo Group, in a 90% vote to send negotiators back to the table. The rank and file voiced their frustration, using a Facebook group page, with the International United Auto Workers and the union bargaining team.  The initial strike began April 17, but then UAW international leadership stepped in and suspended the strike after Local 2069’s negotiation of the first tentative agreement. Yet, the union bargaining team failed to resolve major issues which the workers had identified with the corporation.

The latest contract proposal retained the two-tier wage system, where newly hired employees receive lower wages than those with more seniority doing the same job. This is a decades-old tactic, which is meant to institute lower wage scales across the board and historically victimizes Black and Brown workers.

Union workers had objected to an alternative work schedule model, eliminating overtime pay after an 8-hour shift. A pay increase in the second tentative contract would be wiped out by higher health care costs, and workers want to keep their Cost Of Living Allowance.

After the autoworkers voted overwhelmingly against the second contract proposal, picket lines are solid, and strikers — knowing the company does not want to lose orders — are aware of their leverage. Volvo brought supervisors back into the plant to try to perform tasks normally done by the union workers — to scab the strike. The company has reached out to temporary employment agencies to get scabs willing to cross the picket line.

Not surprisingly the Volvo Group recorded $1 billion in profits in the first quarter of 2021. The workers deserve the credit for that success, as their plant is the single largest producer of trucks in North America and the biggest truck manufacturer in the Volvo Group.

Check out a new labor action tracking tool that is more comprehensive than data compiled by the Bureau of Labor Statistics. Developed at Cornell University’s School of Industrial and Labor Relations, this tool tracks not just strikes but rallies and protests. For example, the tracker covers the 2,000 food-delivery gig workers who rallied in New York City and the 800 nurses in Massachusetts currently in the longest strike in the country. Rallies are not included in BLS data, and BLS data only counts strikes of 1,000 or more workers.

Hopefully, we can expect the tool to track actions similar to what happened this past week in Pittsburgh, where the entire staff of a Family Dollar store and a Subway sandwich shop walked out in protest of poor working conditions. (striketracker.ilr.cornell.edu/