Organizers say some three-quarters of a million people demonstrated in over 400 cities in Brazil and around the world on June 19 to demand “Vaccine in the arm, food on the plate and [President Jair] Bolsonaro out.” (Brasil de Fato, June 19) 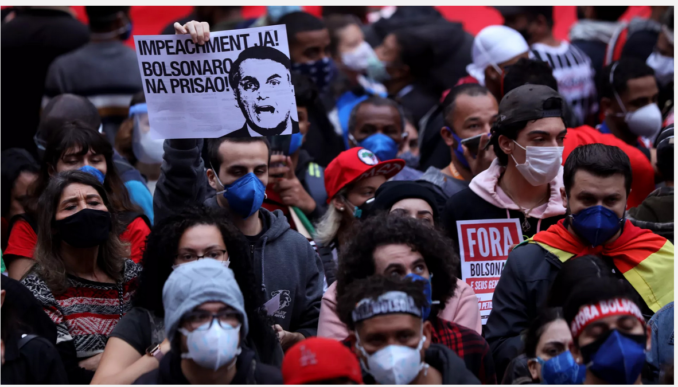 Those responsible for calling the actions included the Brazil Popular Front and People Without Fear, along with workers’ organizations, Indigenous people, religious groups and others. The protests continued anti-Bolsonaro actions of May 29 that drew out people in more than 200 towns and cities in all of Brazil’s 26 states.

June 19 was also the day the official death toll from COVID-19 in Brazil climbed above the half-million mark. Bolsonaro has outdone even Donald Trump in denying the danger of the pandemic. On June 18, he publicly minimized the importance of getting vaccinated. Despite Brazil’s previously efficient public health system, only 40 percent of the population has received even one dose.

Former president and former political prisoner Luis Ignacio “Lula” da Silva accused Bolsonaro of genocide over his mishandling of the COVID-19 crisis. Lula is expected to run again in the 2022 presidential election. He was forbidden to participate in the 2018 election, which Bolsonaro won, but is now way ahead of Bolsonaro in opinion polls.

Despite the ever decreasing lack of popular support for Bolsonaro, who is a near-fascist, he maintains the loyal support of Brazil’s police forces. They have been carrying out massacres in the favelas, the poor neighborhoods near or in the large cities where many of the poorest Brazilians live and where the majority are people of African descent.