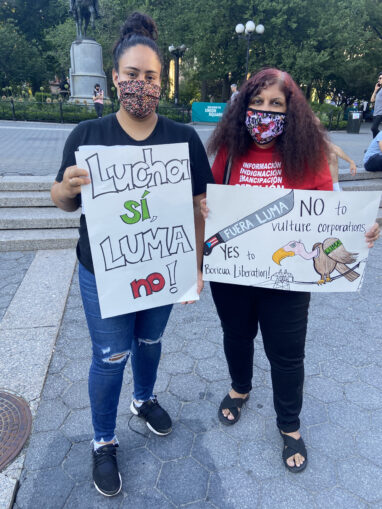 Puerto Ricans in the diaspora protested June 11 against the private LUMA Energy company’s June 1 takeover of the operations of the Puerto Rico Energy Network to provide electricity in their homeland. This privatization is backed by the U.S.-created and appointed Financial Control Board. The following is the protesting organizations’ news release.

New York, N.Y., June 11 — Grassroots Puerto Rican organizations and people and their allies demonstrated in New York City, demanding that the government of Puerto Rico withdraw from the contract with the company LUMA Energy.

On June 1, the government of Puerto Rico, with the approval of the Financial Oversight Dictatorial Board, officially handed over Puerto Rico Energy Network to LUMA, a U.S.-Canadian private joint company, formed by the companies ATCO and Quanta Services and created specifically to take advantage of a million-dollar contract to administer the public corporation Authority of Electric Power.

In the months leading up to the contract taking effect, workers and organizations in Puerto Rico and in the United States took to the streets protesting LUMA and the privatization plan.

Since taking effect, there have been widespread power outages throughout the archipelago. According to one of the spokespeople, Gabriela Malespin from New York Boricua Resistance: “LUMA is the latest in decades of neoliberal attempts to privatize our public services. Puerto Rico’s working class recognizes that this contract represents an enormous threat to our island’s electrical grid, our economy and our livelihoods.

“Our demands are not to simply oust LUMA in order for another corporation to take over. Rather, we want public control of our utilities and the proper resources needed to restore our grid and transition towards renewable energy. This issue represents an intersection between environmental racism, neoliberal privatization and working-class oppression.

“Boricuas in both the archipelago and the diaspora must stand united against this threat and continue to fight until LUMA and other vulture companies are out of Puerto Rico.”

The LUMA contract is exorbitant, costing over $1.5 billion, at a time when the dictatorial fiscal control board is imposing austerity measures on the people of Puerto Rico. With the sole objective of obtaining federal funds, LUMA may withdraw, leaving the archipelago at the mercy of any disaster if such transfers do not materialize at the level or on the schedule provided. LUMA promotes the continuous use of fossil fuel consumption and natural gas as the main source of energy.

LUMA also possesses 68% of Puerto Rico’s water reservoirs, not only privatizing energy but also water, two things that should be basic human rights. In addition, the company has eliminated many of the jobs of a highly trained and unionized workforce to hire replacements with lower wages or unqualified people from the United States.

The diaspora joins with the people in the archipelago in denouncing and demanding that the LUMA contract be canceled. “This is the advancement of the plan for the displacement of the people of Puerto Rico, in favor of the yankees who have already begun to turn it into their paradise island at the expense of our people. We cannot continue to allow our people to suffer. This contract must be canceled, and there must be public renewable energy for the people now!” says spokesperson Eric Ramos, from the Puerto Rican Independence Party in New York City.