Calling for “solidarity, not solitary,” dozens of people — including organizers from prisoners’ rights groups, survivors of solitary confinement and state legislators — rallied outside the Eastern State Penitentiary in Philadelphia June 1. 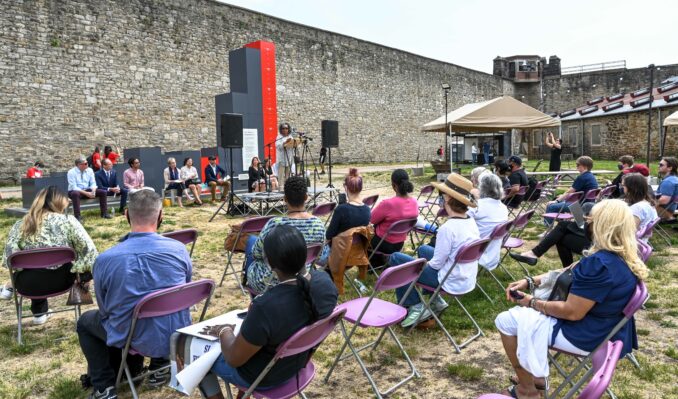 Inside the Eastern State Penitentiary, support for HB1037, June 2.

They called for passage of HB1037, Pennsylvania legislation that would cap the maximum days in solitary confinement at 15. This is in accordance with U.N. Standard Minimum Rules for the Treatment of Prisoners — named the “Nelson Mandela Rules” in honor of the longtime political prisoner in the struggle against South African apartheid. The Pennsylvania legislation would prevent people under 21, LGBTQ+ people and aging (55 years+) community members from being held in solitary.

A June 2 press conference also at Eastern State Penitentiary featured legislators in support of HB1037; this was hosted by State Representatives Tina Davis and Donna Bullock and State Senators John Kane and Katie Muth. Both events were organized by the Human Rights Coalition of Pennsylvania (HRC), the Abolitionist Law Center (ALC), the Coalition against Death by Incarceration and the Solidarity Not Solitary PA-CAIC (Campaign for Alternatives to Isolated Confinement).

Eastern State Penitentiary in Philadelphia, opened by Quakers in the 19th century, was the birthplace of mass institutionalized solitary confinement in the U.S. The practice was later widely discredited and considered inhumane, counterproductive and akin to torture. But in the 1970s it was widely used, as the “War on Drugs” led to a rapid rise in mass incarceration.

At the rally John Thompson, with the ALC, noted that the revitalization of solitary confinement in the U.S. coincided with state efforts to suppress Black national liberation. Prison officials particularly targeted organizers who stood up to abuse from guards or complained to administration. Thompson said, “Solitary confinement was used to break activists.”

Several speakers were survivors of long-term solitary confinement in Pennsylvania prisons. Their testimonials were very emotional. Many had been released after cases against them were exposed as based on lies. They emphasized that while they are survivors, they can’t forget the people still confined. One described being stripped naked, air blown on him and a light shone on him 24 hours a day. He was chained to a metal bed for months.

The event included a mock cell complete with a concrete bed. Those who had never experienced solitary confinement were encouraged to spend just five minutes there and reflect on what it would be to survive this 24/7.

The ‘torture chamber’ of solitary

Patricia Marshall Vickers, part of founding the HRC in 2001, described solitary confinement as “a torture chamber — a means to punish, retaliate, abuse and mentally break a person.” The HRC has received thousands of letters from different prisoners across Pennsylvania, all describing similar brutal conditions.

Incarcerated people report being sprayed with a chemical that burns their skin, but not being allowed to wash it off or receive medical treatment. Many report being stripped naked and placed in a “restraint chair,” with arms and feet strapped to the chair for extended periods of time.

Abusive guards withhold or contaminate their food. Water in cells is cut off for days. Guards turn off heat in the winter and air conditioning in the summer. Basic rights like sunshine and showers are denied. Guards charge into solitary cells, severely beat the incarcerated person and subject them to constant verbal abuse. Incarcerated people with mental health issues are told by guards to “go ahead and kill yourself.”

Vickers stated that “85% of people in solitary are there for disobeying an order, not for violent behavior. Pennsylvania prison administrators claim no one is held past 90 days, but we know they have held people for years.” Former Black Panther Party member Russell Maroon Shoatz spent 33 years in solitary confinement in Pennsylvania prisons.

Commenting on the recent one-year anniversary of the police murder of George Floyd, Vickers said, “We face police brutality on the streets, and the exact same thing happens inside the prisons where our loved ones face abusive guards. We need laws that hold the guards accountable.”

Organizers expressed optimism for passage of HB1037, as situated within a broader wave of racial justice organizing and legislation seeking to reform and abolish solitary confinement. There were three recent major victories against solitary confinement in New Jersey, New York and in Allegheny County in Pennsylvania, where Pittsburgh is located.

“This is the start of people seeing the system for what it is,” said Saudia Durrant with the ALC. “In Pennsylvania prisons, there are over 2,000 people every day — disproportionately Black, Brown and poor — subjected to the state-sponsored violence of solitary, hidden behind prison walls and removed from human connection and rehabilitation. To transform our societies, we must end the use of long-term isolation and create alternative methods of care and rehabilitation.”

Marta Guttenberg contributed to this article.