On June 1, the Financial Oversight and Management Board overseeing Puerto Rico’s economy privatized the island’s public power utilities by signing a $1.3 billion contract with private consortium LUMA Energy. The contract, in effect for the next 15 years, could increase electric rates by 10 cents/kwh or more.

LUMA customers are already encountering new fees and significantly higher bills than formerly paid to the public Puerto Rican Electric Power Authority. Thousands of PREPA workers have lost their jobs. The privatization has fueled demonstrations including encampments and picket lines at plant gates. Further actions could lead to mass protests similar to those in summer 2019 that forced former Governor Pedro Rosselló to resign.

The following is a statement from unions representing thousands of Puerto Rican workers, ranging from teachers to truck drivers, in support of PREPA workers and demanding the LUMA contract be repealed. 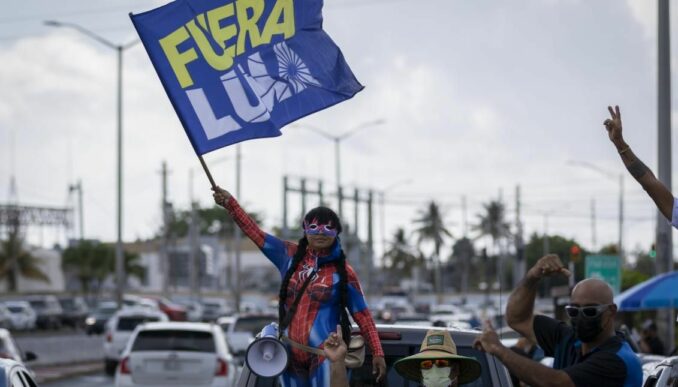 Union organizations today warned Governor Pedro Pierluisi and the Financial Oversight and Management Board that they will paralyze the country if the LUMA Energy contract — that increases rates, allows the consortium to leave Puerto Rico if a hurricane strikes and displaces thousands of workers — is not canceled.

“We are warning the attorney for the Financial Oversight and Management Board, Gov. Pedro Pierluisi, that there will be no peace in Puerto Rico if the contract is not repealed and they listen to the people who demand, not only a public and more efficient PREPA, but also one free of fossil fuels. Right now there is a favorable atmosphere for paralyzing the country, and if the governor continues to be deaf to the people, we will do so. We have already held several meetings to coordinate logistics and dates, and this week we will meet again to finalize details. Make no mistake, this summer will be one very similar to that of 2019,” said Carlos Rodríguez, coordinator of the Frente Amplio de Camioneros (Broad Front of Truckers).

“Today, we tell LUMA not to bother settling in our country, since we will not leave them alone until they leave Puerto Rico. And the workers who they intend to bring in from abroad should know that if they cross the picket line, they will face a people willing to defend their energy sovereignty and their access to water. There is no life without water and electricity! In the next few days we will not only be in front of the gates together with our comrades in struggle to prevent the entry of the LUMA parasites, but we will continue calling for activities that will lead to a National Strike if the intransigent Pierluisi does not stop the contract. The ball is in their court,” stressed María del Mar Rosa, organizational coordinator for Asociación Puertorriqueña de Profesores Universitarios (Puerto Rican Association of University Professors).

The spokespersons insisted that the governor wants to deprive the people of the island of its main resource for economic development, the Puerto Rican Electric Power Authority, by giving it up to LUMA Energy for nothing and without any guarantee for the country, and they will not allow it.

“We are not going to allow our main industry to be taken from us, and even more so, knowing that the people will be the ones who will pay the consequences. To this must also be added the humiliating and abusive way in which they have treated the workers of the corporation, stripping them of their positions and rights and even the possibility of attending to the service needs of citizens. In the same way, we express our total and unconditional solidarity to the Alliance of Active Employees and Retirees, who have been bulldozed, abused, humiliated and belittled by the government of Pedro Pierluisi and the dictatorship that governs the country,” he added.

The group reiterated its support and solidarity with the PREPA employees who have been transferred, to whom they advised to keep their calm.

‘Remove all the vultures that invade our country’

“This will be something temporary — we have lived through very difficult times, but we have also shown that the struggle of the people of Puerto Rico is our most effective tool; if the people removed a governor, they may have the will to remove all the vultures that invade our country. We reiterate our support, solidarity and the commitment to make sure that LUMA’s days are numbered,” stated Antonio Cabán, president of the Federación Central de Trabajadores (Central Federation of Workers), United Food and Commercial Workers, Local 481.

Union leaders maintained that they will fight alongside the Active Employees Alliance and the people to oust LUMA Energy from the country.

“The so-called rulers should have no doubt that they will have an effective response from the working people. We are not sitting by, nor are we going to do so. You, arbitrarily, have closed the doors to dialogue; you have closed the doors to the search for equitable solutions in the courts of justice; you have legislated to undermine our rights; you have done everything you can to guarantee their domination. Now, face the consequences. You drew the line. We know how to cross it,” said Lizbeth Mercado, president of the Unión de Empleados de la Corporación del Fondo del Seguro del Estado (Union of the State Insurance Fund Corporation).