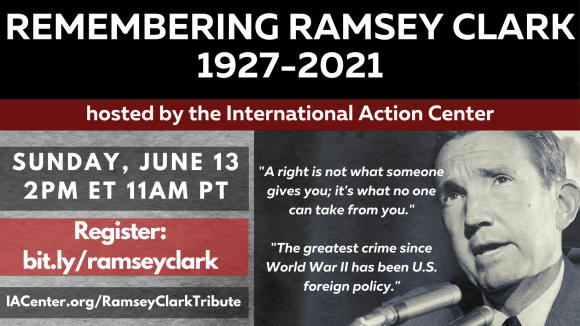 Representatives from Cuba, Venezuela, Nicaragua, Palestine, the Philippines, Malaysia, Serbia, Syria and more will be paying tribute June 13 to Ramsey Clark, a beloved and respected antiwar humanitarian. Clark, a former U.S. Attorney General under the Lyndon Johnson administration from 1967 to 1969, died April 9 after a long illness at the age of 93.

The two-hour tribute will be a virtual memorial featuring hundreds of viewers from around the world, honoring Clark who became a fierce, defiant opponent to U.S. foreign policy, especially in the area of wars of aggression and occupation including sanctions.

The son of the U.S. Supreme Court Justice Tom Clark, Ramsey Clark was one of the main contributors to the 1965 Voting Rights Act and other historic civil rights legislation, as an assistant U.S. Attorney General.

As the June 13 invitation states: “Ramsey Clark founded the International Action Center in 1992 to oppose U.S. wars of aggression and occupation, defend liberation struggles and defend political prisoners. In addition to supporting the wave of resistance then sweeping Latin America, IAC militants joined Ramsey Clark’s international delegations that stood in solidarity with Palestine in besieged Gaza, that defied the blockade of Cuba, the war and sanctions on Iraq, the U.S.-NATO war on Yugoslavia and the kidnapping of then President Aristide in Haiti.”

This solidarity came in various forms like people’s tribunals and commissions,  rallies, humanitarian trips bringing aid like medicines, foods and other supplies to sanctioned countries, and legally defending leaders of other countries, who were falsely accused of crimes by international courts doing the bidding of U.S. imperialism. His visits to war-torn areas like the former Yugoslavia, Vietnam, Iraq, Gaza and Sudan did not deter Clark from risking his life to accomplish missions of solidarity.

The fact that Clark was so hated by the ruling elite, into which he was born, is a testament to his willingness to be front and center in showing his disdain for a government he was once a part of, but eventually turned his back on, to consciously side with the most oppressed.

To register for the June 13 tribute, go to bit.ly/RamseyClark, and to read and view condolence messages, go to iacenter.org.