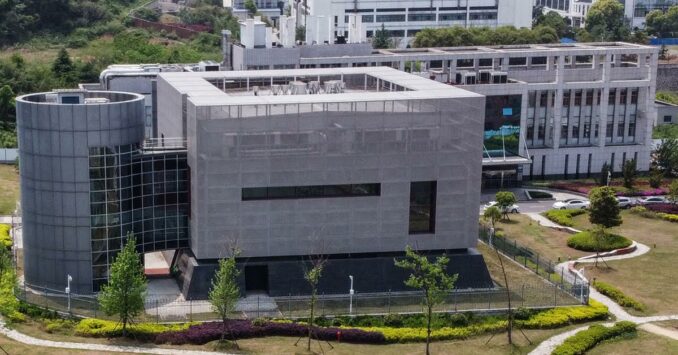 Shortly after the Dec. 30, 2019, announcement by the Wuhan Municipal Health Authority that a dangerous new respiratory infection had been detected in the Chinese city, conspiracy theories began to spread faster than the novel coronavirus itself.

One which is receiving renewed attention claims the virus was created at the Wuhan Institute of Virology (WIV) and was either leaked or deliberately released. This conspiracy theory, supported only by wild speculation with no hard facts, represents one part of a broader offensive by the U.S. government against China, one which looks more and more like a new Cold War. It is supported by both U.S. capitalist parties, which aim to indefinitely preserve Western imperialism’s grip on the global order.

The first tweet mentioning the lab-leak conspiracy came Jan. 5, 2020, from @GarboHK, a self-described “British-HongKonger” who regularly retweets figures like Trump’s former secretary of state, Mike Pompeo. “Today the evil regime strikes again with a new virus,” his tweet read in part. It also blamed the 2002 SARS outbreak on China.

A few weeks later, on Jan. 23 the Daily Mail chimed in. This British tabloid, with a notable right-wing bias and of dubious credibility, nevertheless enjoys Britain’s highest circulation. It is a textbook example of how privately owned media operate under capitalism.

Many scientists and health experts around the world roundly rejected the lab-leak conspiracy theory when it first appeared, noting that a natural origin is far more likely. If previous epidemics are any indication, finding the exact origin of the virus could take a long time. The origins of most Ebola virus outbreaks remain unknown, and it took scientists 14 years to discover the route SARS took from bats to civets to humans. (nature.com, May 27) The exact origin of the COVID-19 virus remains unknown, a year and a half after it was first described — but that doesn’t make the lab-leak conspiracy theory any more likely.

Now, over a year since the conspiracy theory began to gain traction among far-right politicians and media outlets, it’s still spreading — and not just in right-wing tabloids. The Biden administration and liberal-leaning corporate media are lending it credence.

On May 25, the Jeff Bezos-owned Washington Post (a regular critic of the Trump administration) ran a headline: “Fact check: How the Wuhan lab-leak theory for pandemic origin suddenly became credible.” On May 30, CBS News interviewed Scott Gottlieb, introducing him as a former Food and Drug Administration commissioner “who sits on the board of Pfizer,” without noting that he was a former Trump administration official taking full advantage of the “revolving door” between Washington and the corporate world.

Gottlieb claimed in the interview that despite “an exhaustive search” for an animal that could have spread the virus to humans, “We have not found such an animal.”

Much of the renewed interest in the “lab leak conspiracy” revolves around two articles recently published in the Wall Street Journal. One referred to an undisclosed document from an anonymous official, who allegedly served in former U.S. President Donald Trump’s administration; this nebulous source claimed three WIV researchers were sick in November 2019. The second article alleged Chinese authorities had stopped a journalist from entering an abandoned mine, where WIV researchers had recovered coronaviruses from bats in 2012. The researchers have long maintained that none of the viruses were SARS-CoV-2.” (nature.com, May 27)

So the current wave of interest in the conspiracy theory is not due to any new evidence. An undisclosed document from an anonymous former Trump administration official is hardly a bombshell, and the accusation that Wuhan Institute of Virology researchers were sick in November 2019 was addressed months ago by a World Health Organization investigative team that traveled to China earlier this year.

Dr. Marion Koopmans, a virologist with the WHO team, told NBC News on March 11 that “there were occasional illnesses, because that’s normal. There was nothing that stood out.” She added that the number of researchers who reported cold-like symptoms was “maybe one or two. It’s certainly not a big, big thing.” A few researchers reporting cold-like symptoms in late autumn is not a smoking gun for the virus’ source.

Several other members of the WHO team disputed the reportage from papers such as the New York Times, which has accused China of obstructing the team and lacking transparency. Peter Daszak, a British zoologist on the team, said on twitter: “[t]his was NOT my experience on @WHO mission. As lead of animal/environment working group I found trust & openness w/ my China counterparts. We DID get access to critical new data throughout. We DID increase our understanding of likely spillover pathways.”

Nearly a year ago, the magazine Scientific American published an extensive article June 1, 2020, detailing the work of Shi Zhengli, a leading researcher at the WIV. In 2016 she was part of a team investigating a mine where six miners had come down with a respiratory illness and two died. While researchers identified coronaviruses in six bat species inhabiting the mine, a fungus was identified as the source of the miners’ illness. Conspiracy theorists assert, without evidence, that they actually had the novel coronavirus, which the researchers sampled and brought back to the lab, and that it later escaped or was deliberately released.

When the novel coronavirus’ spread became known in Wuhan in late December 2020, Shi and her team immediately began testing patient samples and found that five of seven patients had genetic material common to all coronaviruses. Tests were repeated, and samples were sent off for a full genomic sequence, which was completed in just 40 hours — this process generally takes weeks — and immediately uploaded to the U.S. National Center for Biotechnology Information database Jan. 5.

Meanwhile, Shi reviewed her lab’s records to check for any mishandling of materials, especially during disposal, and whether any of the samples her team had brought from mines or caves matched those of the new coronavirus. Everything came back normal, and no samples matched. “That really took a load off my mind. I had not slept a wink for days,” she said. So far, no lab in China has found samples of the novel coronavirus in its inventory.

Yet these facts do not deter those committed to attacking China. A change in leadership in Washington has only given new life to the lab-leak conspiracy, while the Biden administration keeps in place a “coronavirus fact sheet” hastily issued by the State Department during the Trump administration’s last days. At the time this “fact sheet” was released in late January, Secretary of State Pompeo was busy telling reporters that Trump would be the next president, despite having lost the election.

However, while Democrats attack conservatives for supporting the “Big Lie” that Trump won the 2020 election, they seemingly embrace the false accusations made  against China.