The shackling of incarcerated workers and other members of our class is a heinous crime against humanity. As committed communists, we have to fight to end the conditions of their incarceration. There is another form of shackling:  psychiatric shackling. It is used against the mentally ill or those suspected of mental illness. 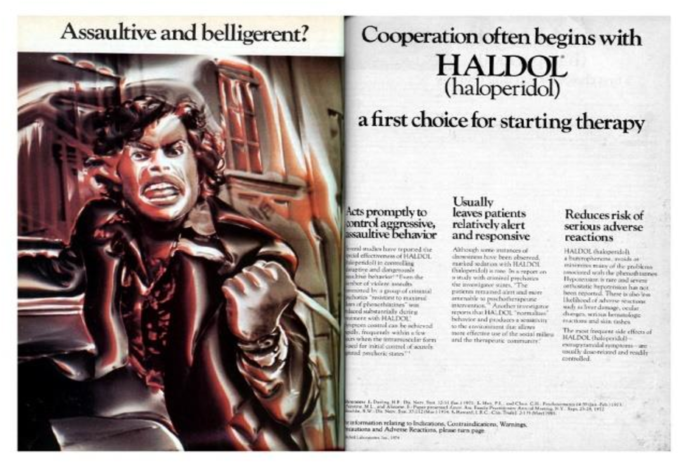 What is the reasoning behind these forms of shackling? In modern times, it is used to restrain “violent” or “difficult” patients, those in need of real treatment and sympathy. I had akathisia and needed to move. Instead, psychiatric “caregivers” decided I should be trapped like that. It is a dehumanizing and humiliating experience.

Sometimes they were given orally, in the cases of Klonopin and Zyprexa, but most times it would be Haldol and Ativan given via injection. Patients’ choices were limited to nonexistent. Sometimes they could reject addictive benzodiazepines.

After this psychiatric injection series, they were locked in a “safe room” and deprived of reading material or human interaction for hours on end. The National Alliance on Mental Illness (NAMI) and Mental Health America (MHA) oppose the usage of physical restraints and seclusion of patients, viewing them as failures of treatment and the treatment team. (A treatment team consists of a psychiatrist,  therapist, social worker and the patient’s family, if possible.)

This is only the beginning of understanding the history of shackling in mental health facilities. In the past, they used electroshock therapies and psychosurgery; lobotomies were first used in the early 20th century. Dr. Antonio Egas Moniz received a Nobel prize for this cruel discovery.

If drilling holes into the skull to destroy part of someone’s brain was bad, a new “development” in psychosurgery allowed doctors to go through an eye socket and stir up the brain. The result would be a completely compliant patient, who oftentimes was totally disabled and needed to be taken care of permanently.

Drugs given, not help

There is also drug-induced shackling of the mind and sometimes the body. This was permissible because no one believed mentally ill people were capable of giving consent. Some facilities still use drug-induced shackling, because it is easier to dope up patients than to help them, if help is possible. In modern psychiatric facilities, the view is that it’s easier to drug patients and dump them after a week, without treating their acute problems.

The use of drug-induced therapy started with the advent of the typical antipsychotic or neuroleptic Thorazine (chlorpromazine). This drug was given to  patients in the now-destroyed state hospital system to keep them from acting up and to stay compliant. This is a dehumanizing cruelty, but there’s more: Then came Haldol (haloperidol).

Both of these medications had unpleasant or life-threatening side effects. First, the disorders tardive dyskinesia, Parkinsonism and akathisia were found to be caused by neuroleptics. “Neuroleptic” means “to take hold of one’s nerves.” This is an  appropriate name for a medicine when doctors actually wanted to cause side effects. It was believed that typical antipsychotics only worked on D2 (dopamine) receptors, thereby causing tardive dyskinesia or Parkinsonism. It was beyond cruel.

Psychiatrists thought the medications were working only if they caused tardive dyskinesia or Parkinsonism. Since then, it has been found that these medicines don’t need to cause these cruel side effects. But psychiatric facilities still use intramuscular Haldol on patients.

Even on the first use, Haldol can cause tardive dyskinesia and Parkinsonism. A person doesn’t need to be on it for an extended period of time to suffer from these conditions, although tardive dyskinesia is most common after years of taking antipsychotics. The second and third generation antipsychotics, such as clozapine, aripiprazole and brexpiprazole, are shown to work without impacting D2 receptors as much.

Unfortunately, there are other negative aspects of psychiatry. Psychiatrists have often mistreated marginalized people. Racist psychiatrists often overdiagnosed disorders of Black and Brown people. In 1851, Samuel A. Cartwright proposed a mental illness called “drapetomania” to explain why enslaved people fled their captors. This so-called “mental illness” did not exist but is an example of how psychiatry has abused and shackled people.

It’s not that mentally ill people shouldn’t take advantage of all the positive help that psychiatry can give. The use of medication is both important and legitimate. However, psychiatrists can cause their skills and medications to shackle those who enter their maw.

Remember this and fight for mentally ill people in prisons, psychiatric hospitals and outside the walls.