On the 36th anniversary of the horrific bombing of the MOVE family house in Philadelphia on May 13, 1985, hundreds gathered at Osage Ave. and Cobbs Creek Parkway at a plaque commemorating the event.  Speakers focused on naming and remembering the lives of the six adults and five children murdered by the repressive state. 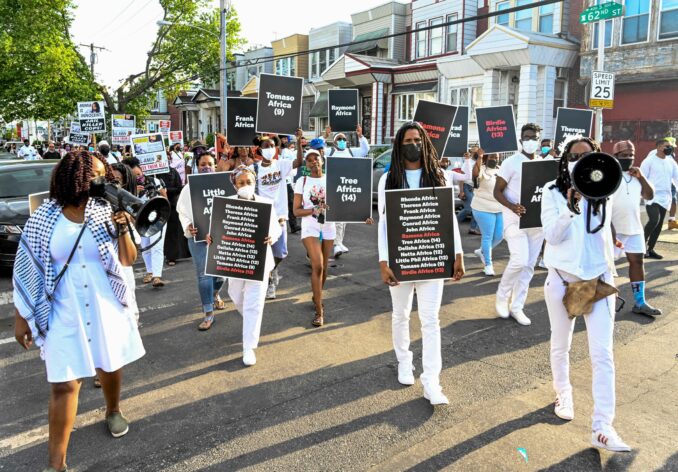 This year’s commemoration was especially poignant because of recent revelations involving the city’s callus mishandling and mistreatment of the remains of children who died there.

Several demonstrators carried placards listing the names of the 11 MOVE family members who perished. The adults were Rhonda Africa, Theresa Africa, Frank Africa, Raymond Africa, Conrad Africa, and John Africa – who founded the MOVE organization in 1972.  The children were Katricia (Tree) Africa, 14, Delisha Africa, 12, Netta Africa, 12, Little Phil Africa, 12, and Tomaso Africa, 9.  Birdie Africa, 13, survived the fire but died in September 2013.  Ramona Africa, the only adult survivor, continues to be a force in the movement.

A visibly emotional Mike Africa, Jr, son of MOVE 9 members Debbie and Mike Africa, recalled childhood memories of those who died in 1985. “The people who took the remains of my family and incinerated them have to be held accountable.  What the city authorities have been doing over these many years has to come to a screeching halt. They need to stop covering up their behavior and destroying evidence of what they have done.”

In late April, news surfaced that Penn University Museum was in possession of bones thought to be the remains of Tree Africa and Delisha Africa.  The bones were given to UPenn forensic anthropologist Alan Mann by the Philadelphia Medical Office for analysis. Mann subsequently transferred to Princeton University, taking the bones with him.

Earlier today Philadelphia Mayor Jim Kenney met with the MOVE family and acknowledged that additional remains from victims of the 1985 assault had been kept in the Philadelphia Medical Examiner’s office until 2017, when they were incinerated and dumped by the city without the knowledge or permission of living relatives. During a late afternoon press conference, Kenney announced the firing of the city’s health commissioner Thomas Farley.

Kenney also apologized to the MOVE family, as did the Philadelphia City Council last year on the anniversary of the atrocity carried out by the city.  However, MOVE members have insisted that the only remedy they want from the state is the release of political prisoner Mumia Abu-Jamal.  Several signs calling for Abu-Jamal’s freedom were carried by demonstrators.

At the rally speakers recalled the history of Philadelphia’s decades-long attack on the MOVE organization, including the police months-long blockade of the neighborhood around the families’ Powelton Village home.  On Aug. 8, 1978, a police attack on the compound resulted in the arrest of nine MOVE members, who served over 40 years in prison.

During the weekend of May 12-13, 1985, police again orchestrated an attack on MOVE, including making sure that the children who lived in MOVE’s Osage Ave.  house were present at the time of the assault.  Speakers recounted the involvement of Philadelphia police as well as state and federal police forces, as well as the fire department’s collusion in the assault.

A military helicopter dropped a C4 military-grade bomb on the house, resulting in a fire that reached adjacent houses. Officials then made the decision to “let the fire burn.” In addition to the lives lost, 60 homes in a predominantly Black neighborhood were destroyed.

This year’s gathering was followed by a march through West Philadelphia to Malcolm X Park.  Along the way, neighbors expressed support for MOVE.