Activists and allies turned out May 10 for a rally at Federal Court in New York City to support Steven Donziger, a lawyer and champion for environmental justice and human rights. Donziger led the team that won a historic $9.5 billion lawsuit against Chevron for pollution crimes in Ecuador. 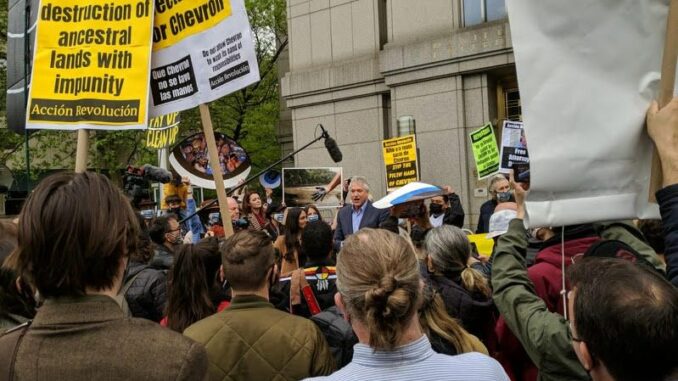 In 1993 Donziger sued Texaco, Inc., on behalf of Indigenous Ecuadorans sickened by the company’s oil operations in the Lago Agrio region of the Amazon. The lawsuit eventually included Chevron, which had acquired Texaco. In 2011 it finally succeeded in holding Chevron liable for water and soil contamination in Ecuador between 1964 and 1992.

Ten years later, the company still refuses to pay and start the cleanup.

Instead, Chevron has hounded Donziger, resulting in a misdemeanor contempt charge for which the lawyer has endured over 600 days of house arrest. Donziger is currently being tried in Manhattan, where the rally was organized by Acción Revolución, “the largest group of revolutionary Ecuadorians in the United States, fighting for a better future.” (accionrevolucion.org)

Donziger’s real “crime” was taking on Big Oil and winning a billion-dollar judgement for Indigenous people in Ecuador whose lives and lands have been destroyed by Chevron.