Mumia Abu-Jamal has fought for international solidarity since he wrote for The Black Panther newspaper as a 14-year-old in 1968. Today, from State Correctional Institute Mahanoy, he continues to encourage all revolutionaries to support each other’s struggles regardless of where in the world they may be. 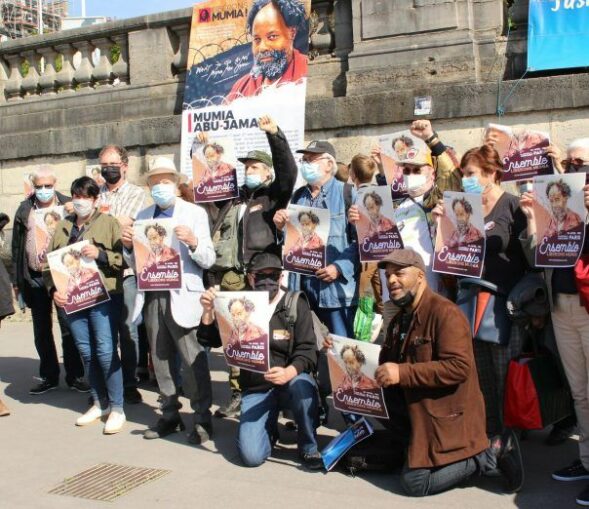 Solidarity is a reciprocal thing. People around the world have signed petitions, written letters and called Pennsylvania officials demanding Mumia’s release from prison, because he is a political prisoner, because he’s innocent and because ailing and elderly people should not be incarcerated.

On April 24, Abu-Jamal’s 67th birthday, activists around the world came out into the streets — dans les rues, a las calles, and auf die Straße — to demand Mumia’s freedom.

In Paris, where the Mumia Abu-Jamal Collective has demonstrated every first Wednesday for 20 years at the U.S. Consulate, over 200 people attended a rally April 24.

The next day almost 400 people from the Black Diaspora gathered in Paris. The Anti-Negrophobia Collective, the “Trop Violans” Collective from French Guiana, and others from Africa, Martinique, Mayotte, Guadeloupe, Kanaky (New Caledonia), Polynesia, and Guiana spoke against French imperialism and for Mumia’s freedom. (Video with English subtitles: youtu.be/rpviXeodqCI)

Madly Etile, the mother of Keziah who was tortured by Paris police as he protested French policies in Martinique in July 2020, spoke. (tinyurl.com/eydmpaw8) Mumia had recorded a message called “Environments of Racism” for Keziah on March 26. (tinyurl.com/49ezzak3)

Abu-Jamal supporters gathered at the U.S. Consulate in Amsterdam April 19, calling for Mumia’s release. Several bands played live music from a trailer truck. During the rally, the Vice Consul came out to accept a letter of demands.

In Germany, where a movement to free Mumia has existed for years, several protests occurred, including April 8 in Hamburg by the Black Community Coalition for Justice & Self-defense in front of the U.S. Consulate.

Another protest happened April 17 in Frankfurt am Main outside the U.S. Consulate led by supporters of Leonard Peltier, Abu-Jamal and members of the Cuban Solidarity Network.

In Berlin, 200 people protested April 24 to free Mumia and other prisoners, organized by Death in Custody, Migrantifa and Network for political prisoners, Gemeinschaftlicher Widerstand, Criminals For Freedom, Sabot, no129 and the Red Aid.

VVN/BdA, an anti-fascist organisation founded by survivors of the Nazi death camps explained why Mumia is an honorary member of their organization. Turgay, Müllsch, Yok, Mila Morgenstern and Elses Alptraum contributed live music.

In Vienna, Austria, the Network to Free All Political Prisoners held a rally April 24 to support Mumia as well as political prisoner Ali Osman Köse in Turkey, who also suffers serious health problems after 37 years in prison.

Three actions for Mumia took place in Mexico April 23-25. In Tepic Nayarit, community organizers took flyers about Mumia to a park to talk to young skateboarders, getting positive feedback. In Oaxaca, organizers played cumbias and urged listeners to support Mumia’s struggle. In Mexico City, another music-centered rally took place which can be watched at: tinyurl.com/n2p7hc6m.

The people, united, will free Mumia!

Thanks to Julia Wright and Jacky HORTAUT in France, Michael Shiffmann and Gregor in Germany and Carolina Saldaña in Mexico for their reports.