Hundreds of Syracuse University students marched through snow during a Black Athletes Lives Matter (BALM) action against police brutality April 21. The march had been planned for months by student-athlete organizations, but coincidentally took place the day after cop Derek Chauvin’s conviction for the murder of George Floyd. 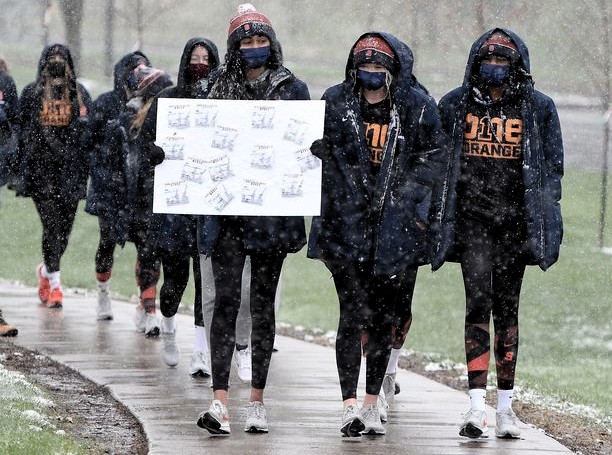 The multinational and multigendered crowd of students marched by teams from Skytop South Campus to Coyne Field for a rally. Then each speaker-organizer led conversations with each of the different groups and teams, sharing thoughts and experiences. According to participants, athletes were there representing all the university’s teams. Going by the most recent data from College Factual, SU — an NCAA Division 1 school competes in 17 sports. (tinyurl.com/up5zw)

Speakers emphasized the need to stay focused and continue resistance. Syracuse junior rower Grace Asch said of Chauvin’s guilty verdict: “As we celebrate this moment in history, make sure to remember it is just that. A moment. One verdict, as we’ve seen in the past, makes no promise to the future. Let’s not confuse accountability for justice.” (tinyurl.com/8n4zrez4)

Chris Elmore, an African American senior on the football team, testified that he has experienced police brutality since a young age and knows any traffic stop now could mean death. Two of his cousins were killed by police.

Track and field athlete Eunice Boateng stressed: “We want to see something different happen, not just within this country, but all around the world. [We’re] finally using our voice and pushing and letting people know what kind of power we hold.”

The student-athlete event continues years of protest at SU against racist, sexist and anti-disability policies at the school. Current organizing began in 2014 when the coalition group, THE General Body, occupied SU’s administration building for three weeks.