Because of their dedication to improving the standard of care for their patients, nurses at St. Vincent Hospital in Worcester, Mass., remain on the picket line. Their demands include a safer nurse-to-patient ratio (meaning the level of care necessary for each patient is a factor when determining nurse staffing), a pool of nurses who are trained to care for the more critically ill patients in intensive care units and a team of rapid response nurses who can be dispatched when a patient needs to be quickly stabilized during a life-threatening event. 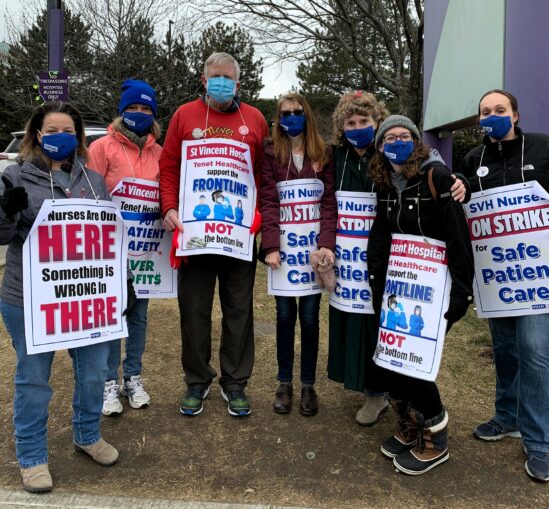 Having nurses with critical care specialty training as well as rapid-response nurses can greatly improve survival rates of the sickest patients. Adequate staffing decreases the risk of error and improves the overall recovery rate for patients. Tenet Healthcare Corporation, which owns St. Vincent’s, is estimated to have wasted over $35 million on replacement nurses and police details to break the strike rather than using their dollars to meet the nurses’ reasonable demands.

Reports from inside the hospital of substandard care by replacement staff are filtering through to the nurses on the picket line. The community wants their nurses back in charge of their care, and the St. Vincent nurses are committed to delivering quality care to their community. The first round of talks between the Massachusetts Nurses Union (MNU) and Tenet is set for April 26. (Framingham Source, April 18)

After a frustrating month of contract negotiations, close to 3,000 United Auto Workers Local 2069 members went on strike April 17 at the Volvo Truck plant in Dublin, Va. Workers complain of concessions in the past three contracts while the company makes huge profits. UAW Secretary-Treasurer Ray Curry stated: “The UAW is disappointed that Volvo Truck has failed to present a substantial offer by the March 16 contract deadline, despite a contract extension. Our goal remains to achieve a fair tentative agreement for our members, their families and the community of Dublin, Virginia.” The UAW proposed April 26 as the date to resume contract negotiations. (Detroit Bureau, April 20)

The strikers have already won support, garnering large donations of food and drink. “We are happy to stand with you, our brothers and sisters, as you demand fair wages, retirement and other benefits from a prosperous corporation such as Volvo,” said Kristy Vance, president of the Western Virginia Coalition of Labor Union Women (CLUW) chapter. (WDBJ, April 19)

If the strike drags on, the UAW, with $790 million in its Strike and Defense Fund, should increase weekly strike benefits — currently $250 per week with medical coverage.

Due to the hazards of the COVID-19 pandemic, some municipalities in southern California now mandate a higher hourly wage for workers in retail stores and pharmacies with 300 or more workers. The “hero pay” ordinance passed in Long Beach increases pay by $4 an hour. (Press Telegram, April 26)

The Kroger grocery chain announced that, rather than comply with the ordinance, it would close two stores in Long Beach: Ralph’s and Food 4 Less. Mayor Robert Garcia would like to take action against Kroger and pointed out the company made so much in profits that it spent “nearly a billion dollars in 2020 to buy back its own stock shares.”

Kroger has previously announced closure of three grocery stores in L.A., after the Los Angeles City Council voted in February that large grocery stores must pay workers an extra $5 an hour for about four months. (tinyurl.com/yetv85j2)

A company spokesperson claimed the ordinances are “misguided” and that the municipalities have “overstepped” by guaranteeing that workers are compensated for continuing to provide essential services to their communities during the pandemic. (Fox Business, April 18) The United Food and Commercial Workers condemned Kroger’s store closures.

This practice of private entities disregarding governmental measures that raise workers’ living standard is not new. In 1929, Harvard University fired 20 women janitors rather than comply with the Massachusetts Minimum Wage Commission’s demand to pay the women an extra 2.5 cents per hour. Harvard Alumni reacted to the firings calling them “Harsh, stingy, socially insensitive and considerably short of the highest ethical standards of the time.” (The Crimson, April 29, 1974)