From the LGBTQ+ Caucus of Workers World Party

We, the LGBTQ+ Caucus of Workers World Party, are outraged, disgusted and alarmed by the continued attempts to silence and kill Mumia Abu-Jamal, a Black revolutionary political prisoner who has been inside the imprisoned nation for almost 40 years — first railroaded into a death sentence and then, because of the movement rising up to defend him, spared an execution but given a life sentence.

The capitalist imperialist state has not given up their attempts to kill Mumia; in fact, they have doubled down. Currently Mumia Abu-Jamal is suffering from severe dermatitis, has tested positive for COVID-19 and has been diagnosed with congestive heart disease. Additionally, he has suffered from cirrhosis of the liver due to untreated hepatitis C. Efforts to get treatment for Mumia have been delayed as a part of a decades-long punishment inflicted on him by the white-supremacist, colonialist state.

It was announced April 14 that Mumia had been taken to the hospital after experiencing chest pains and that he would undergo heart surgery. This caucus echoed and affirmed the demands of millions of Mumia’s supporters, those being:

In order to seek actual, accessible treatment for his health problems, Mumia Abu-Jamal must be released from prison immediately. He has been locked away for almost 40 years, suffering from mistreatment and negligence by the prison-industrial complex. His health is not good, and he must be properly treated, as all incarcerated persons should be. 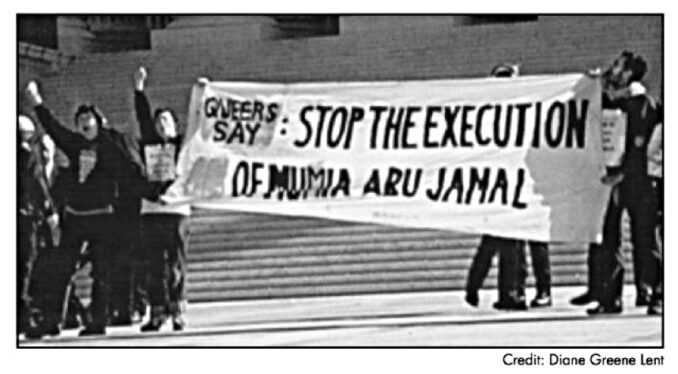 From Philadelphia to Paris, and elsewhere across the world, supporters flooded the offices of Pennsylvania Gov. Tom Wolf and Philadelphia District Attorney Larry Krasner with letters, emails and phone calls demanding Mumia be released.

We, the LGBTQ+ Caucus of Workers World Party, echo and affirm this demand called out from all across the world: Free Mumia Abu-Jamal immediately! Free all political prisoners immediately! An Injury to One is an Injury to All!