Two years after voting by a 2-to-1 margin to unionize, on March 4 the embattled Elon Faculty Union finally forced the greedy administrators of Elon University to the bargaining table. EFU is Local 32 of the Service Employees Union, Workers United Southern Region. 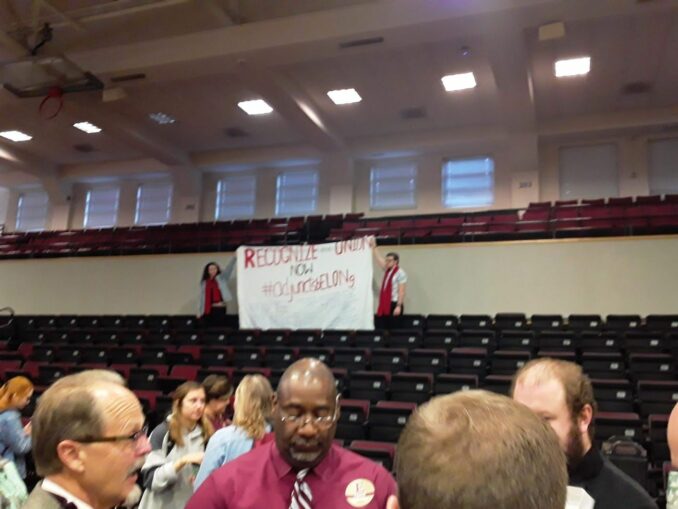 Students for an Equitable Elon stage a banner drop in March 2020, one of many direct actions in support of the Elon Faculty Union.

A victory for all of us

The faculty union represents hundreds of adjunct and contingent faculty, a powerful presence of organized educators on this rural campus near Greensboro, N.C. The university sits in one of the most reactionary locales in the U.S., home to unusually violent voter suppression and family-separation actions by local law enforcement. U.S. Postmaster General Louis DeJoy, one of the leading architects of the Trump campaign to disrupt the 2020 presidential election, is a trustee of the university and was awarded Elon’s Medal for “Entrepreneurial Leadership” in 2017.

But none of this was enough to overcome the power of a united working class.

EFU’s victory came two days after a solidarity action by students of the Boldly Elon Solidarity Collective, a group of student organizations demanding racial, social and economic justice at the university. On March 2 during “Elon Day,” a major annual fundraiser, BESC staged protests around campus against the school’s union busting.

Facing a well organized union and a campaign to withhold donations because of the university’s anti-worker stance, the uprising within the Elon community left university administrators with no choice but to bargain.

The victory at Elon — especially in the context of the Alamance County Sheriff’s Office’s racist attacks on voter registration, which included Elon organizers — must be seen in the historical context of efforts by the Communist Workers Party to organize textile mills there in the 1970s.

On Nov. 3, 1979, five of those organizers were killed in Greensboro by the Ku Klux Klan, the American Nazi Party and various federal and local law enforcement agencies. The dead included Sandra Neely Smith, a nurse and the former student body president of Bennett College — one of only two Historically Black Colleges for women. Others killed were  Dr. James Waller, Dr. Michael Nathan, William Evan Sampson and Cesar Cauce.

Every day of struggle for Black liberation and worker power in North Carolina since 1979 has taken place in the context of this horrific attack. Union victories at Elon University — including a now-unionized School of Law — testify to the power of solidarity amid harsh conditions in North Carolina and throughout the South.

Organizing educators is an uphill battle in a state where collective bargaining for public workers is still banned. Called “the Jim Crow law” by the North Carolina Public Service Workers Union, UE Local 150, the ban originated in legal segregation.

On Sept. 19, 2020, National Nurses United won the “largest hospital union victory in the South since 1975” at Mission Hospital in Asheville. And in public education, the North Carolina Association of Educators has been largely successful in winning school shutdowns and early vaccine access to keep education workers — including teachers, facilities workers and administrative staff — safe as the pandemic rages on. The public sector generally has been well organized, with UE Local 150 in recent years winning a $15 an hour minimum wage for public employees, including those in school districts, municipalities and the UNC System.

The victory at Elon ties together education workers in that public system and private universities across six contiguous counties through the central part of the state, creating a strong regional community of workers organizing against efforts by bosses, politicians and billionaires to dominate these institutions.

A victory over systemic white supremacy

White supremacy — which pervades every aspect of life in the U.S. — can be especially sharp in private education. Many of the gains of the Civil Rights Movement to ensure adequate access to people of color end up interpreted through boards of trustees and presidents, who approach the university as if it were a real estate company or the research arm of a corporation guarded by a private police force.

In defiance of antidiscrimination law, U.S. universities continue to offer high paying jobs with benefits and job security disproportionately to white men. At Elon University, while the majority of full-time faculty are still men, the majority of part-time adjunct faculty are women and gender-oppressed people — with similar sharp disparities existing across lines of nationality as well.

By exercising the maximum achievable discrimination at every stage of the educational process, from admissions to costs to hiring, private universities preserve white patriarchal supremacy while cultivating the appearance of “diversity” or “inclusion” through the use of adjunct instructors.

Unionization offers higher pay, better benefits and better job security for adjuncts, limiting the university’s ability to divide and conquer classroom instructors by race and gender. Student organization, faculty unionization and community solidarity all limit the university’s discriminatory capacities and offer the promise of education by workers for workers — a threatening prospect to the anti-Black, anti-woman and anti-worker status quo.

As the EFU prepares to negotiate at Elon, pressure has not let up. Elon dining and physical plant staff, alongside the Boldly Elon Solidarity Collective, are now demanding hazard pay for campus workers. This recognizes that all workers — not just adjunct faculty — have shared interests against their greedy administration.

Students have demanded the resignation of Police Chief Joseph LeMire. He left his last job as campus top cop at University of Wisconsin-Milwaukee in 2019, after going along with neo-Nazis who attempted to disrupt a Jewish community event.

Throughout North Carolina communities, the working class continues to unite and challenge the white supremacist, sexist operations of university management. And as EFU’s organizing committee leader Anna Love has said, each victory is “a victory for all of us.”