March 21 — In the past week, one group of Haitian cops attacked at least two precincts, released prisoners who they said were being held illegally, set fires, sacked a car dealership and demanded the government retrieve the bodies of cops who died in a March 12 ambush.

In the past year, Haitians have experienced a six-hour gun battle between the reconstituted Haitian army and some police protesters and armed conflicts between gangs from different neighborhoods and self-defense militias. Concurrent with these small-scale armed conflicts have been massive popular marches, which have drawn hundreds of thousands of people to the streets throughout Haiti, demanding that President Juvenel Moïse step down. 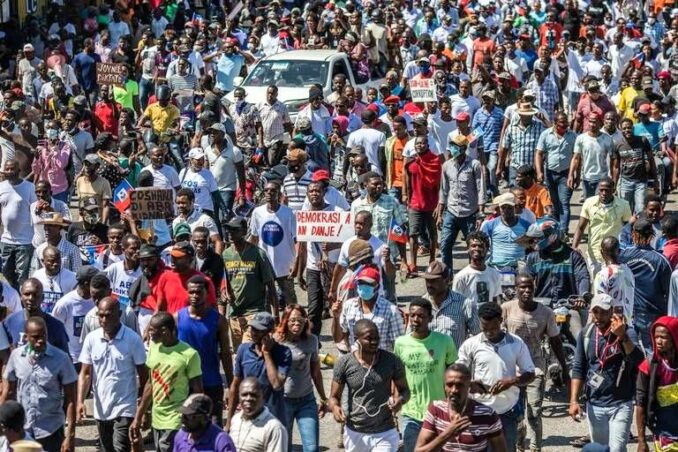 While imperialist politicians and media often blame Haiti’s poverty and turmoil on Haitians, many Haitian progressives point to U.S. imperialism’s oppressing and suppressing the world’s only country founded by a successful slave revolt, which was victorious in 1804. At the time, the rulers of the slavocracy dominating the young United States were terrified by the Haitian example.

For over two centuries, as the March 17 issue of Haïti-Liberté pointed out, the U.S. has engaged in “embargoes, sabotage, bullying, aggression, destabilization campaigns, coups d’état, military occupations and theft of territory and treasure” against Haiti.

It is illuminating to think of this centuries-old U.S. policy as an underhanded, implicit imperialist war against Haiti, the world’s first Black republic, for its people’s “original sin” of smashing the French slave owners’ rule.

The March 12 ambush occurred when a cop patrol in two armored personnel carriers entered the poor Village de Dieu (Village of God) neighborhood in Port-au-Prince, Haiti’s capital. The cops planned to raid the headquarters of the Five Second Base gang. After luring the patrol into a trap, ambushers destroyed one APC and seized the other along with body armor, radios and weapons. Five cops were killed, eight injured.

The cop raid was a response to the Five Second Base shooting up the headquarters of Haiti’s national electricity company in downtown Port-au-Prince a few days earlier.

Gangs, including some the government has allowed to flourish because they discourage political activity, have blossomed in Haiti’s poorest neighborhoods. Some gangs have turned to the crime of kidnapping, doubling the number of kidnappings in 2020. Some Haitian banks have been involved in these kidnapping projects.

The gangs themselves grew out of self-defense militias set up in the 1980s after the fall of the Duvalier father-son dictatorship, which ruled Haiti from 1957 to 1986. The militias protected neighborhoods from remnants of the Tonton Macoutes, the Duvaliers’ paramilitary force. Washington backed the Duvaliers and even arranged to fly the son, Jean-Claude Duvalier, safely to exile in France.

Poverty in Haiti is pervasive. Haiti’s minimum wage for the highest paid textile workers is about $6.50 for an 8-hour day. While exact figures are hard to come by, most Haitians — 50% to 80% — survive on less than $3 a day. Unemployment officially is estimated at 14%, but many “officially employed” workers’ jobs are far from steady.

For the past four decades, Haitian presidents have been either picked, endorsed or deposed by the U.S. Secretary of State. Hundreds of thousands of Haitians have taken to the streets this year to demand that President Moïse step down since his constitutional term of office has expired. Moïse refuses.

Washington’s reaction was to do nothing more than urge Moïse to hold parliamentary elections, which is tacit support for Moïse.

The Haitian bourgeoisie — the urban middle class — appears to be split on how to respond to this crisis, between a faction that wants to smash the gangs and one that would like to see Moïse leave.

It is going to be hard to smash the gangs, since ultimately their existence reflects the vast economic inequality in Haiti between the wealthy and the poor. Moïse is not going to leave before the U.S. tells him to.

One thing is certain: Chaos in Haiti is going to grow.