The historic union election sought by majority Black workers at a Bessemer, Ala., Amazon warehouse ends March 29. All indications are that the vote will be close, and the outcome could take weeks to determine. 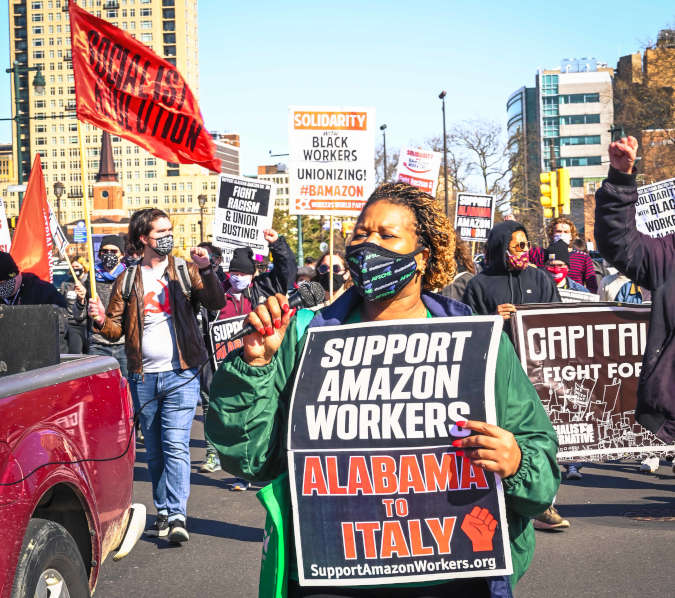 A victory would not only be one of the biggest labor victories in the U.S. in decades — the BHM1 facility would be the first U.S. union organized within Amazon.

Whatever the outcome, the struggle begun by the BAmazon workers — as they dubbed themselves — has already changed the trajectory of worker organizing against the behemoth corporation, in the U.S. and internationally. Some Amazon workers in Europe have already unionized. A 24-hour strike was called March 22 of an estimated 30,000-40,000 workers across Italy over brutally increased workloads and work shifts because of the pandemic e-commerce surge. This is the first such strike in Italy to involve the whole Amazon supply chain, including hubs and delivery drivers. (tinyurl.com/yfdm582j)

Sara Nelson, international president of the 50,000 member Association of Flight Attendants-CWA, said of the Alabama workers: “They have turned the whole world’s eyes to Bessemer, Alabama. They’re kicking off a new era of organizing. Whether they get the vote in this election to win or not, they’ve already won. Because they’ve sown into the consciousness of working people everywhere, who feel like they don’t have any respect where they live and work and aren’t happy where they are, that they don’t have to take it. They actually have a way to fight back!” (tinyurl.com/75njus7p) Nelson is also a member of the national AFL-CIO Executive Council.

Amazon’s union busting has been relentless at all its facilities and subsidiaries, including the Whole Foods Markets. Organizing against the Alabama workers, the company is reportedly spending $10,000 a day on anti-union consultants and attorneys with the notorious Morgan Lewis law firm.

According to a 2021 Brookings Institute analysis, Amazon’s profits increased by $9.4 billion since 2019, and Amazon’s founder and CEO Jeff Bezos’ net worth increased by nearly $68 billion. Amazon could have quintupled hazard pay to workers during the pandemic and still have exceeded 2019 profits. (tinyurl.com/hrdm6shk)

The Bessemer workers are seeking union representation by the Retail, Warehouse  and Department Store Union (RWDSU), which has organized poultry plants throughout the South. Workers say the grueling conditions in Amazon warehouses are most similar to those faced in meat processing plants: fast repetitive heavy assembly-line work, standing in place for long periods with almost no break, frequent injuries and no respect, especially for workers who are Black, Latinx and women or gender-nonconforming. Almost half of the workers at the Bessemer warehouse are women.

Since voting started Feb. 8, support for the Bessemer workers has accelerated. Their campaign, merging civil rights and workers’ issues, has received a flood of endorsements from groups ranging from the National Football League Players Association, Major League Baseball Players Association, the World Federation of Trade Unions and Black Lives Matter, even to a reluctant President Joe Biden who said people at least should have a fair chance to unionize. (See “Workers are not robots! Racism, high-tech speedup and the Amazon union drive,” March 8, and other Workers World coverage.)

The Southern Workers Assembly called for the first national day of solidarity Feb. 20, which was supported by the Support Alabama Amazon Union campaign. SAAU followed that up with call-in days and tweet-storms targeting Amazon executives and Morgan Lewis union busters, then joined the U.N. Day Against Racism organizers and dozens of labor, progressive and community organizations for a March 20 Day of Solidarity. Over 50 U.S. cities and towns had rallies, pickets and marches in support of the Alabama workers, to say: “Solidarity with BAmazon Union! No to Amazon union busting and racism!

Hundreds of activists, many from unions, gathered in front of Whole Foods Market in Harlem, N.Y., in solidarity with the Bessemer Amazon workers. The rally was sponsored by the CBTU, the December 12 Movement and Workers Assembly Against Racism (WAAR). Besides support for the Alabama union drive, people demanded freedom for political prisoner Mumia Abu-Jamal and an end to anti-Black and anti-Asian violence.

Lots of truckers’ air horns blew at the Amazon Fulfillment Center in Euclid, Ohio, as sixteen-wheelers rolled by the rally for Bessemer workers. There’s support for union organizing at Amazon — in Alabama, in Ohio and everywhere.

Atlanta’s solidarity action was designed for visibility — across from a major shopping center on three- and four-lane Camp Creek Road. The Amazon Fulfillment Center only a mile away meant lots of Amazon and Prime delivery trucks came by, many honking support — along with Teamster drivers, bus drivers and people in cars. The multinational crowd of students, longtime activists, nurses, retired workers and current union members made a dynamic video sending Georgia support to the Alabama workers. Black workers from Amalgamated Transit Union, the Federation of State, County and Municipal Employees (AFSCME), Communication Workers (CWA) and CBTU spoke passionately about the need to “Organize the South!”

Working-class people and retired union members from Pensacola, Fla., to Foley, Ala., showed up for a solidarity rally outside the local Amazon warehouse, where some driving by waved, and some blew their horns.

Houston activists leafleted shoppers in a huge Whole Foods parking lot, using a bullhorn to educate about supporting the Alabama workers. Police were at the store before protesters even arrived — an indication of Amazon’s union-busting ways. Store security and store management harassed those speaking to shoppers and threatened arrest if their cars weren’t moved off  “company property.” Shoppers were supportive, many eagerly taking fliers and agreeing that workers in the South need more unions.

A lively solidarity rally was held at the Amazon Spheres/Amazon International headquarters in Seattle. Mayor Jenny Durkan tried to get the demonstration cancelled on the pretext Amazon was holding a COVID-19 vaccination nearby — at a location not even visible from the demonstration. The event went on as planned; Durkan was exposed as hostile to labor, and a wide range of speakers called for steadfast support for the Alabama workers. Representatives were there from the International Longshore Workers Union (ILWU) Local 19, Freedom Socialist Party, Organized Workers for Labor Solidarity, Party for Socialism and Liberation and Workers World Party. Leith Kahl of the ILWU told the rally, “Obviously Jeff Bezos didn’t want us here today — but we’re here, and we’ll be back!”

Workers, unionists and supporters rallied at a Whole Foods Market in Portland, Ore., chanting “Amazon and Whole Food workers need a union now!” After Jeff Bezos acquired the food chain in 2018, rest breaks were cut and lunch breaks no longer paid for. Adam Nee, a 13-year worker at Whole Foods, spoke on his efforts to unionize there. Brian Denning, fired by Amazon for union organizing, told of dehumanizing conditions he faced at a Portland Amazon Fulfillment Center. Andy Terhune and Emmanuel Martinez of Workers World helped organize the event as part of the Support Amazon Workers coalition.

There were two morning pickets in the San Francisco Bay Area, one in Brisbane at the Amazon Fresh plant and another at a recently purchased site (originally zoned for housing) for a future Amazon distribution center. Then an afternoon car caravan of over 60 cars and 20 bicyclers in Oakland brought together both sides of the Bay Area. The caravan blocked a three-lane street in front of Whole Foods for 10 minutes with a loud solidarity rally and ended at Snow Park with over 100 people attending that rally. Sponsored by Support Alabama Amazon Workers-Bay Area, the three events were organized by a coalition including People’s Strike-Bay Area, East Bay Democratic Socialists of America, IBEW, many rank-and-file union members, teachers’ unions, the United Front Committee for a Mass Labor Party and Workers World Party.