March 21 — In the days since the brutal slaying of eight people at three different Asian-owned massage businesses — one in Acworth in Cherokee County and two others, 40 miles away in Atlanta in Fulton County — there has been a maelstrom of emotions and actions. 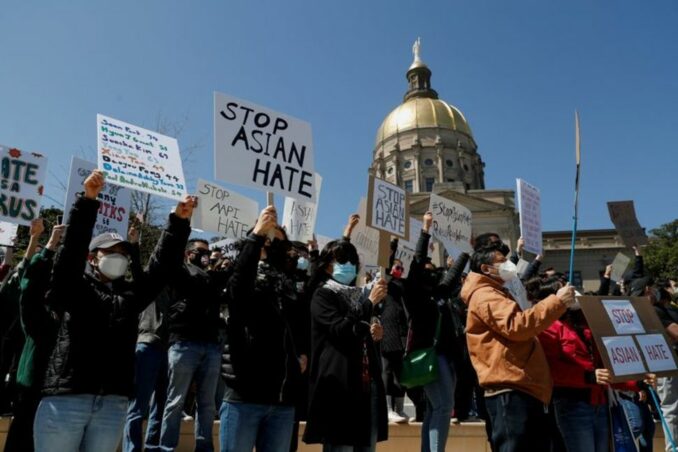 There was relief, of course, that the killer was captured before he continued his deadly rampage and that he readily confessed.

Immense grief and sorrow as well as fear and anger have been felt by large numbers of the diverse Asian American and Pacific Islander communities who live in the area. While they come from a great number of different countries and speak a multiplicity of languages, each with a rich cultural heritage of their own, there is a shared experience of experiencing intolerance and being seen as unwelcome outsiders that is shared.

From new immigrants to naturalized citizens to those U.S. born, the awareness of the threat of slurs, unpleasant or hostile interactions and physical harm in public spaces is a common thread in the many public interviews, community Zoom calls and organizational statements that have taken place since the March 16 massacre.

For some Atlantans, the depth of this painful uncertainty whether it is safe to walk on the street or enter a store is a harsh and unfamiliar reality to accept. Yet sympathy abounds even if there is no understood solution. For others, whose skin color or gender or disability places them in a “different” category in a society steeped in white supremacy, misogyny and transphobia, there is recognition of what that is like.

Vigils have taken place daily, sometimes both day and evening time, at all three sites of the murders. They have become mourning spaces with people steadily coming in the ones and twos and whole families to bring flowers, candles, written messages of condolence and concern for the families and for the community. Some pray; others reach out to strangers to share their thoughts; others stand silently for a moment and then leave.

What has outraged many is the parsing of the words “hate crime” by police authorities, especially the Cherokee County Sheriff’s office, which in its first press conference after questioning the self-admitted killer, explained that Robert Aaron Long had had a “bad day, ”citing his “sexual addiction” for deciding to “eliminate the temptation.”

For many, this was again another example of “humanizing” the white perpetrator, while refusing to acknowledge the lives of those killed — who were mothers with children who loved them, people who were admired for their kindness and warm spirit, hard workers who endured for the well-being of their families.

There was a very large rally March 20 against anti-Asian hate that spilled beyond the expansive Liberty Plaza across from the Georgia State Capitol. There the crowd held up their signs and cheered a long list of speakers from various Asian organizations, Asian state elected officials, Senators Raphael Warnock and Jon Ossoff, Rev. William Barber from the Poor People’s Campaign and many others reflecting the breadth of community support.

Each denounced the animus that motivates hate crimes. Some called for new legislation on gun purchases or criticized the voter suppression measures that would harm future voting accessibility for communities of color in particular.

Dozens of cars decorated with signs continuously circled the area, horns honking nonstop to make sure everyone knew it was time to wake up to racist and sexist violence.

As of this writing, Robert Aaron Long is charged with eight counts of murders and one count of aggravated assault, but neither Cherokee nor Fulton County have added the “hate crime” charge, each saying more investigation is needed.