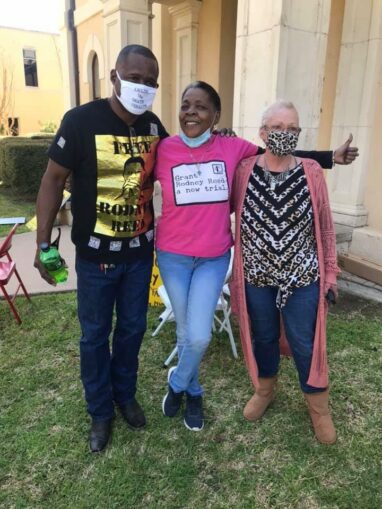 Rodrick Reed stands beside Sandra Reed and Pam Perillo (above) at a rally held March 20 for Rodney Reed, an innocent man on Texas death row. The rally was held to build up support for a May 17 evidentiary hearing which could set Rodney Reed on his path to freedom. His mother, Sandra Reed, told the crowd: “In my mind, in my spirit, I feel that change is in the air. And change is long overdue. In this courthouse there’s inequality, racism, conspiracy, prejudice against the poor. But we, the Reed family, are staying strong.”

A highlight of the rally was the introduction of Pam Perillo, who had spent 39 years in Texas prisons, 19 of them on death row, and had faced two execution dates. Another speaker gave an update on the critical health of political prisoner Mumia Abu-Jamal and all got a copy of the new Jamal Journal to learn more information. Rodrick Reed, one of Rodney Reed’s six brothers, ended the rally saying, “All we are asking for is a fair trial. Give Rodney a fair trial and Rodney will free himself.”

–Report and photo by Gloria Rubac