This month marks the 150th anniversary of the founding of the Paris Commune.

The Commune was established during a bloody intercapitalist conflict called the Franco-Prussian War. In 1871, Parisian workers were in revolt against France’s Government of National Defense, seated in Versailles, which planned to surrender part of France and pay a fine to invading Prussian troops. 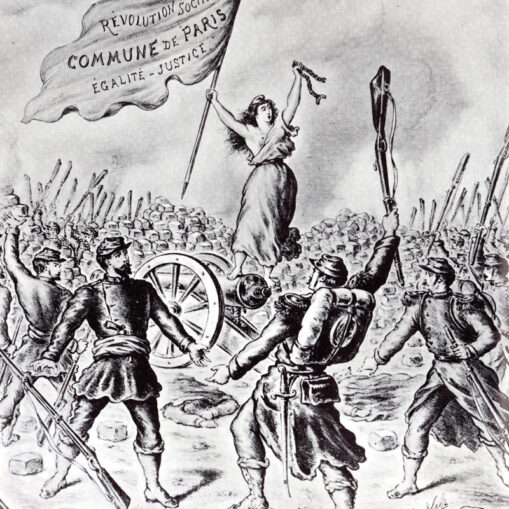 On March 18, 1871, women seized cannons belonging to the popular militia known as the National Guard. The Guard refused to fire on the women and rebuffed attempts by Versailles troops to drag away its cannons.

With the National Guard in control of Paris, plans were made to elect a new, workers’ government — the first of its kind. But the population was preoccupied with the military defense of the city.

From day one, women took on a range of tasks, some traditional such as childcare, and others anything but. They sewed sandbags — and some women helped pile them onto the barricades. Women tended to the wounded as ambulance nurses. Many nurses sported rifles or revolvers and fired on the Versailles government’s troops.

There were multiple women’s organizations, such as the Women’s Vigilance Committees and the Union of Women for the Defense of Paris. The latter was affiliated with the First International, led by Karl Marx in London. There were numerous social clubs where political discussion took place. Many were held in churches that had been taken over. Some clubs were specifically for women.

Public education was restructured, independent of the Catholic Church, with schools for both girls and boys. Workshops were set up by the women’s organizations, creating jobs for women making products needed on the battlefield, including cartridges and sandbags. Women attendants staffed the military canteens, keeping the Commune’s soldiers fed.

Women helped enforce the Commune’s requirement that all men aged 19 to 40 enlist in the National Guard — they hunted down and exposed “draft dodgers.” They publicly denounced police officers and their spouses as agents of Versailles.

In so many ways, women were defending and advancing a vision of a whole new society. Their dream was put down in a campaign of terror that ended May 28 with some 20,000 Communards killed, their bodies piled in mass graves, and over 43,000 arrested. Passersby and children were among those slaughtered.

The French word “pétroleuse” was coined by the bourgeoisie to defame women Communards. Not only were they attacked for abandoning their “feminine duties” as wives and mothers, they were accused of setting the fires that raged across Paris in the Commune’s last days. While the charges of arson were by and large false, the women leaders who emerged during this 72-day struggle had an incendiary passion for equality and justice.

The most famous of many standout leaders was Louise Michel, who was equally skilled in shooting a rifle and political oratory. She played many roles as chair of the Women’s Vigilance Committee, including mobilizing women to care for the wounded. She defended the right of sex workers — who lacked regular work or needed to supplement meager wages — to serve as nurses. Some men opposed their presence.

As arrestees were rounded up by the thousands, Michel escaped capture, but she turned herself in upon learning that her mother was arrested in her place.

Other women Commune leaders included Beatrix Excoffon, Andre Leo, Elisabeth Dmitrieff (the 20-year-old leader of the Union of Women), Nathalie Lemel, Anna Jaclard and Sophie Poirier. Many of them, along with Michel, were put on trial and received harsh sentences, including banishment to a fortress, a life sentence of hard labor, years of imprisonment, or exile to various French penal colonies, including French-colonized Guiana in South America and Kanakry, which the French called New Caledonia, in the Pacific.

Many of these exceptional women were unrepentant at trial. Michel famously told the court: “I am yours. Take my life if you want it.” She was banished to a fortress in Kanakry. Lemel unapologetically testified that “I drew up a manifesto with four other women. I cooperated in building the barricades.” Her sentence was the same as Michel’s. (Edith Thomas, “The Women Incendiaries”)

Among the numerous, lesser-known women tried and sentenced were bookbinders, garment workers, cardboard makers, bootlacers, sex workers and housewives. Working women had formed the base of the Union of Women and the Vigilance Committees.

Louise Michel supported an 1871 revolt of 200,000 Algerians against French rule. She befriended the rebels who, along with 4,200 Communards, were exiled to Kanakry.

Michel embraced the cause of the Indigenous Kanaks, learning their languages and using her teaching skills to offer education to children and adults. She supported the 1878 uprising against land theft under the French policy of “cantonment.” Its leader, Chief Atai, was among the 1,200 killed when France suppressed the rebellion.

“The Kanaks were seeking the same liberty we had sought in the Commune,” Michel wrote. Her solidarity is still remembered in Kanakry, where an elementary school is named in her honor. (Nic Maclellen, “Louise Michel”)

In 1880 a universal pardon was issued for all those sentenced in connection with the Paris Commune. After returning to Paris, Michel co-chaired a conference calling for amnesty for the Algerian rebels. She condemned French imperialist aggression in Madagascar and Vietnam.

“There was no way that I could have stopped myself from throwing my life to the revolution,” Michel wrote in her memoir.