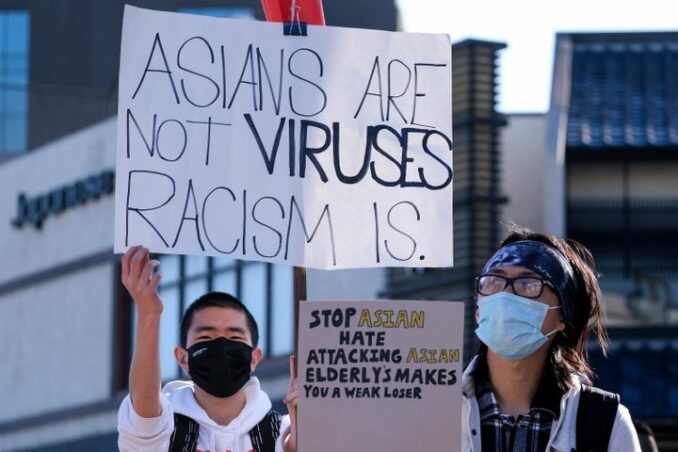 Beginning at 5 p.m., March 16, the first horrific news of the murders of four people and the wounding of a fifth at Young’s Asian Massage in Acworth, a city in Cherokee County northwest of Atlanta, was breaking news on local TV stations.  That was quickly followed around 6:00 p.m. with details of another four women killed at the Gold Spa and the Aromatherapy Spa in the Buckhead area of Atlanta.

In total, six women of Asian descent, four of whom were Korean, and two white people, a man and a woman, were shot and killed. In addition, a Latinx man was wounded.

A 21-year-old, white, Cherokee County man, Robert Aaron Long was captured in south Georgia a few hours later and identified as the suspect in these mass murders.

As of this writing, no motive has been given by Long, but there certainly is reason to suspect racial bias as well as misogynistic beliefs to such a violent act.

Asian people in Atlanta, along with communities in the rest of the country, have experienced a steep rise in incidents of verbal harassment, vandalism to homes and property and physical assaults, including deadly injuries. Targets have often been the elderly and women.

Anti-Asian violence is not a new phenomenon in U.S. history. It goes back to the introduction of Chinese laborers on the construction of the railroads in the West in the 19th century. During WWII, Japanese citizens were imprisoned and their property confiscated. Hollywood has made money off movies portraying Asian men as manipulative and dishonest and women as docile and obedient.

Certainly the xenophobic rhetoric of Donald Trump and his supporters — who blame China for COVID-19 and rail endlessly against the growth of that country’s economy as somehow unfair to U.S. corporations — has fueled anti-Asian hostility in recent years.

Stop AAPI Hate, a nonprofit Asian American and Pacific Islander rights organization, has received over 3,800 calls citing instances of bigotry in words and actions, two-thirds of them coming from women.

The selected murder of these six women shows evidence of deep-seated animosity towards women in general, but in particular to those whose services are mostly used by men. The reality of abuse towards women in their homes, on the job, at school, in the military and on the streets is truly pandemic.

More information will undoubtedly come out about the personal political and religious beliefs and influences that shaped Robert Aaron Long’s views. As has been shown in the past, the omnipresence of racially biased, male dominant, class exploitative societal relations is fertile breeding ground for such violent acts.

Regardless of what brought this 21-year-old man to commit this brutal, premeditated crime, the terror of it has impacted  millions.

Working-class solidarity is needed — not just in words of compassion and sorrow — but through actions to personally and publicly call out instances of anti-Asian, racist, sexist, homophobic and transphobic or ableist speech and actions.