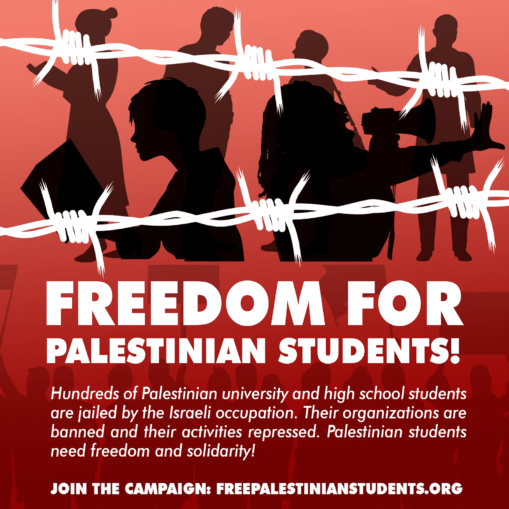 Over 320 organizations have signed onto the international Palestinian Students Solidarity Campaign to free Palestinian Students. Hundreds of university and high school students are routinely abducted, jailed or detained indefinitely on political grounds for courageously speaking out against Israel’s brutal occupation and theft of land in Palestine.

They are held in horrid and torturous conditions and put through courts which have a 99% conviction rate against Palestinians, who fight for their self determination and right to live.

The organizations in support of these political-prisoner students are specifically calling for the boycott of, divestment from and sanctions against Israel, including Israeli academic institutions. They call for the end of all military and economic aid, military transactions, joint projects and direct funding to the occupying regime of Israel.

The solidarity movement is challenging programs that aim to justify or normalize Israeli occupation, which essentially criminalizes the work of student organizing. The movement is organizing direct links of solidarity with Palestinian students and their movement, so that they will not be isolated from their global community of support. (freepalestinianstudents.org)

Whether it’s fighting the capitalist-imposed isolation of prisons, jails and detention centers in the U.S. or Israeli-imposed isolation of imprisonment — international solidarity is the best remedy to break down those barriers. As people are increasingly coming to criticize brutal settler-colonial regimes like Israel and their settler-colonial allies like the U.S. and Canada, they are coming to understand how our enemies use similar tactics against us.

Whether those oppressive tactics include criminalizing criticism, surveillance or isolation from other anti-racist, anti-colonial struggles — it is powerful to see growing international fightback.

Taking the lead from these courageous Palestinian students, over 300 active divestment campaigns on U.S. campuses and a growing number of community groups and unions, including the University of California Student Worker Union and International Longshore and Warehouse Union Local 10, have shown their solidarity. International fightback is inspired by the Palestinian student resistance, and it will not stop until they are free and have the right to determine the conditions of their own lives.

Israel detains these colonized students with aid from countries like the U.S., with its own long history of repression against anti-racist and anti-colonial movements. The International Jewish Anti-Zionist Network states: “Since the late 1960s, U.S.-based Zionist institutions have collaborated in attacks on movements for justice, because they have seen their interests as aligned with those of the U.S. state. Zionist institutions have played a prominent role in supporting the U.S. government’s campaigns to undermine and discredit radical Black, Chicano and Indigenous people’s movements.” (tinyurl.com/7y8dfswy)

Daring to imagine and fight for a world free from destructive colonization, apartheid and occupation — we will not stop in our fight to free Palestinian students and to free all political prisoners!