A historic organizing drive is underway in Bessemer, Ala., at the Amazon BHM1 warehouse. Almost 6,000 majority-Black workers — almost half women — are deciding whether to unionize with the Retail, Wholesale and Department Store Union (RWDSU). Voting is continuing until March 29. 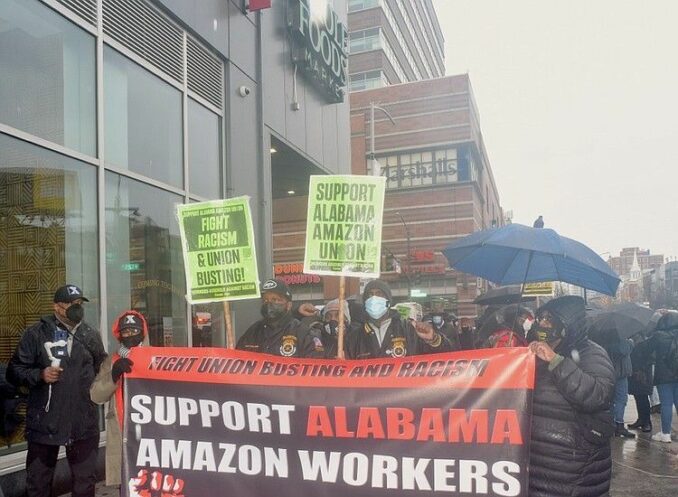 If the workers succeed, they will form the first-ever union inside Amazon in the U.S. — a huge victory against the international capitalist behemoth.

According to BAmazonUnion.org, workers are fighting for “dignity and respect” along with safer working conditions. Theirs is both a civil rights and a labor struggle. They are part of the proud history of the Bessemer-Birmingham area’s Black community, from the independent, interracial unionism of the International Union of Mine, Mill and Smelter Workers in the 1930s and 40s to the 1963 Children’s March against racist segregation.

Amazon’s system is entrenched in racism, as revealed Feb. 26 by Vox/Recode. Review of internal data and interviews with workers and diversity managers showed that Black Amazon employees are underrepresented in decision teams, promoted less frequently and assessed more harshly than non-Black peers. (tinyurl.com/kjuvs9k6)

With Alabama’s history of enslavement of Black people, and legal segregation a living memory, it’s guaranteed that racist discrimination is present inside Amazon’s BHM1 warehouse. The warehouse opened in March 2020; by May, workers were so outraged at their treatment they sought out RWDSU, beginning the fight for union representation.

As at all Amazon “fulfillment centers,” BHM1 working conditions are brutal — with speedups, arbitrary scheduling, inadequate break times, virtually no accommodation for pregnancy, disability or injury, and more. The National Council for Occupational Safety and Health has named Amazon to its list of “Dirty Dozen” employers twice. The Atlantic magazine even headlined: “Ruthless quotas at Amazon are maiming employees.” (tinyurl.com/4zneyh8c)

Amazon claims that increased robotization and surveillance of workers’ motion and location make for a “safer workplace.” Since 2012, when the retail giant bought Kiva Systems, a robotics company, Amazon has added more automation to some existing and all new warehouses, including BHM1. (tinyurl.com/arjnnxnd)

Amazon is following a tradition going back to the “reorganization” of worker jobs at Bethlehem Steel in Pennsylvania, introduced in 1898. That’s when Frederick Taylor used a stopwatch, time studies and his “Principles of Scientific Management” to “improve efficiency” and increase control over workers. Henry Ford improved on Taylorism with the introduction of the moving assembly line.

Now Bessemer workers — some of them children and grandchildren of unionized steel and mine workers — are in a struggle against the exploitation of their labor, fighting the same “speedup-and-die-for profit” principles from the 19th century.

When Amazon workers pick, pack and stow orders in seconds and take minimal Time Off Task for a break, it gives the tech giant an edge over online competitors — generating trillions in profits.

Amazon boasts it pays workers $15 an hour — but during the pandemic the wealth of its owner, Jeff Bezos, has increased by $72 billion. The profits for that megacapitalist came directly out of the sweat and blood of every Amazon worker. (tinyurl.com/kpset8w)

Profit is what a company pockets after costs of labor and overhead are subtracted from sales revenue. In Marxist terms, profit is the value that workers produce, but are not paid for in wages — our unpaid labor. The lower the workers’ wages, the more profit capitalists keep for themselves.

The injustice is obvious. The Bessemer workers are rising up to take back their health, the fruit of their labor and their dignity. Join them!

March 20 is a Global Day of Solidarity with the BAmazon Union. Information at supportamazonworkers.org.