Demonstrators supporting union rights for workers at the Bessemer, Ala., Amazon warehouse picketed outside the South St. Whole Foods market in Philadelphia March 5. They greeted workers and shoppers with flyers, banners and chants including “Union busting is disgusting” — indicating Amazon and Whole Foods are not welcome in our city, a union town. 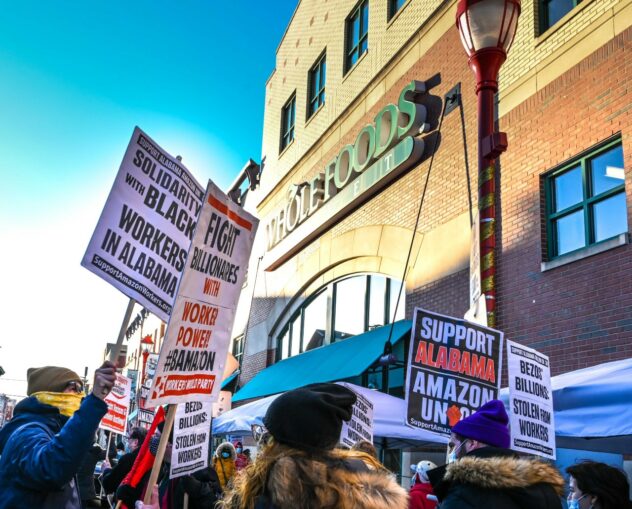 The protesters brought a 10-foot puppet of Amazon owner Jeff Bezos, courtesy of Spiral Q puppet theater. Speakers commented that Bezos, a centibillionaire, is spending millions of dollars to counter the union drive of workers who are simply seeking humane working conditions and benefits.

For over an hour, speakers described Bezos’ efforts to prevent workers from unionizing, including employing the multibillion legal firm Morgan Lewis, headquartered in Center City, Philadelphia.

Many customers waiting to get into Whole Foods welcomed the flyers. A few commented that they would shop elsewhere, except that COVID had limited their access to other options. One woman ran up to ask for multiple flyers. Her sister, employed at an Amazon warehouse in New Jersey, was dealing with company harassment because of her disabilities.