President Joe Biden nominated former Secretary of Agriculture Thomas Vilsack to head the U.S. Department of Agriculture, a job he held for the entire Obama administration from 2009 to 2017. Vilsack testified before the Senate on Feb. 2 — Groundhog Day — and was confirmed a few weeks later.

Vilsack’s eight-year tenure was disastrous for Black farmers. Workers World reported Feb. 12: “Since 1920, over a million Black families have lost their farms (Guardian Aug. 15, 2019), and they now constitute less than 2% of all farm owners. A 2019 Center for American Progress study found the USDA ‘has a long and well-documented history of discrimination against Black farmers. The unequal administration of government farm support programs, crucial to protecting farmers from an inherently risky enterprise, has had a profound impact on rural communities of color.’”

The NAACP and other civil rights organizations strongly opposed the nomination of Vilsack over his treatment of Black farmers, as well as his quick and unceremonious firing of Shirley Sherrod, first Black Director of Rural Development in Georgia for the USDA, in July 2010. Sherrod, who is Black, had been the target of right-wing attacks. (tinyurl.com/yahmt8o6)

Rod Bradshaw, a 67-year-old Black farm owner in Kansas, told the Associated Press: “We have already seen what Vilsack is going to do. We don’t have a prayer if he gets in there.” Bill McGill, 76 years old, lost the small second-generation farm that he inherited from his parents in Bakersfield, Calif., when the same USDA agent he approached for a loan put the land up for sale. “I don’t get attached to hardly nothing any more,” he told the Feb. 24 Guardian.

In 1997, Timothy Pigford became a plaintiff in a federal class action lawsuit filed by Black farmers against the Clinton administration’s USDA Secretary Dan Glickman. In Pigford v. Glickman, federal courts concurred with claims of systemic racial discrimination, but it was not until 2007 that the Pigford Claims Remedy Act allowed Black farmers to apply for reparations. The first paltry settlement payments were not disbursed until 2013.

The consolidation of farmland into fewer private holdings has cost thousands of agricultural workers their jobs. The decline of agricultural commodity prices has become so dire that farmworkers (along with fishing and forestry workers) commit suicide at the highest rate of any sector of the working class — 6.5 times that of the average population. And small farmers are heavily impacted and at risk. In 2018, the dairy company Agri-Mark included a list of suicide hotlines when it mailed farmers checks for their products.

Vilsack eliminated multiple food safety regulations, including the Microbiological Data Program, which monitored foodborne pathogens. As a result, incidents of salmonella infections have steadily increased since 2012, when he eliminated the MDP.

He removed genetically modified organism labeling standards and expedited the process for approving GMO products developed by chemical corporations like Monsanto. In 2019, Monsanto was ordered to pay $80 million in damages to California residents who have developed cancer from exposure to glyphosate-based herbicides in the company’s Roundup weed spray. 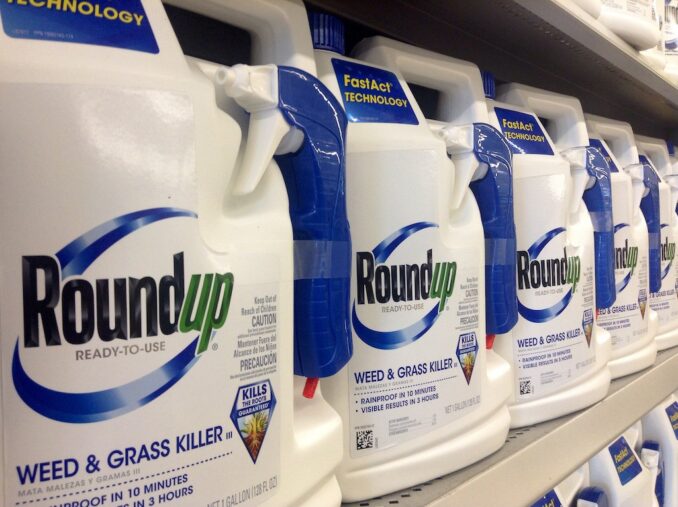 Tom Vilsack removed genetically modified organism labeling standards and expedited the process for approving GMO products developed by chemical corporations like Monsanto. In 2019, Monsanto was ordered to pay $80 million in damages to California residents who have developed cancer from exposure to glyphosate-based herbicides in the company’s Roundup weed spray. © Mike Mozart/Flickr

Vilsack defended the beef industry’s use of the ammonia-treated additive known as “pink slime.” In 2012, Vilsack said there was “no question” of the product’s safety, despite Canada and the European Union banning the use of ammonia gas to sterilize food. (Mother Jones, April 2, 2012)

Rather than bolster worker protections and stabilize the volatile agricultural sector through central planning, the capitalist state’s only response to falling commodity prices is international economic aggression. This was one of the primary purposes of Trump’s “U.S.-Mexico-Canada Agreement,” a rebranding of NAFTA, which was praised by big agribusiness.

During the Feb. 2 Senate hearing, Vilsack announced he would prioritize “foreign market access” in Southeast Asia and Africa. “Certainly our competitors are doing that,” he added, a clear reference to China’s Belt and Road Initiative, which has been empowering nations to construct their own agricultural infrastructure.

During the four years of the Trump administration, Vilsack collected a $1 million annual salary as CEO of the U.S. Dairy Export Council, a role that is now filled by former DuPont executive Krysta Harden, Vilsack’s former deputy secretary at the USDA between 2013 and 2016.

In January 2020, Vilsack won the lottery in Iowa, where he had served two terms as governor from 1999-2007, and pocketed the $150,000 winnings. Clearly, his sympathies are not with superexploited agricultural workers or struggling small farmers, especially Black farmers.