In a historic ruling, the Delaware River Basin Commission voted Feb. 25 to permanently ban fracking (hydraulic fracturing) for natural gas in the Delaware River Watershed. This ruling formally affirms a drilling moratorium the DRBC imposed in 2010. 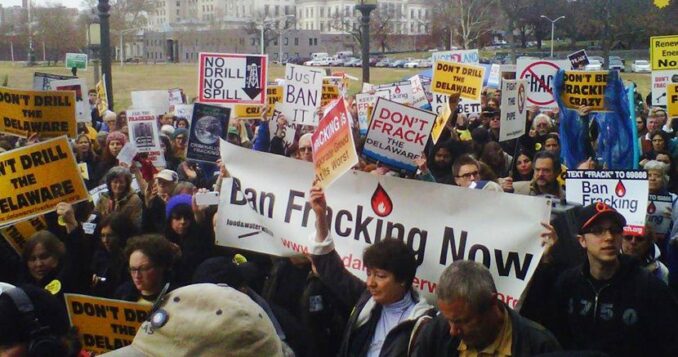 Representatives of the four states with waterways the Delaware River drains — Pennsylvania, New York, New Jersey and Delaware — voted in favor of the ban. But the federal government representative from the U.S. Army Corps of Engineers abstained, claiming more time was needed to coordinate with the Biden administration.

Executive Director Wenonah Hauter of Food & Water Watch, one of several groups who fought for the ban, criticized the federal abstention: “Grassroots activists stopped a plan to frack the Delaware River and never stopped fighting until today’s victory was assured. . . . Fracking is a threat to the Delaware River and everywhere else. Communities living with the harms of fracking have known for years that there is no way to make fracking safe.

“The White House chose political expediency today over protecting the drinking water of 15 million people. Biden should listen to communities and science and support a ban on fracking everywhere.” (foodandwaterwatch.org)

More than 15 million people, a population including New York City; Philadelphia and Trenton, N.J.; and Wilmington, Del., rely on the 13,539-square-mile Delaware River Basin for their drinking water. The protected area includes the Delaware Water Gap and the Upper Delaware Scenic and Recreational River areas — parks that attracted three million visitors and generated $130 million in economic activity in 2019, according to the National Parks Conservation Association.

Environmental and community activists have pressured the DRBC for over a decade to ban fracking in the area. Thousands of people signed petitions, wrote letters, demonstrated and spoke out at public hearings. This campaign expanded the broader struggle across the U.S. to ban fracking and to stop building dangerous pipelines to transport petroleum and natural gas extracted through fracking.

Fracking involves the high-pressure injection of water laden with salt and chemicals into multiple wells to fracture the bedrock and release natural gas from deep underground shale formations. Millions of gallons of water, drawn from nearby rivers, are used each time a well is fracked. The chemical compounds used contain heavy metals and toxins, including benzene and toluene. And the drilling process releases underground radioactive material and methane gas. (tinyurl.com/ydbtewm7)

People worry that fracking in the watershed area releases toxic and carcinogenic substances into the drinking water the river provides. Another major problem of fracking is disposal of contaminated wastewater and frequent wastewater spills.

In Pennsylvania’s fracking-prevalent areas, residents report contaminated water wells, flammable tap water and severe health issues including cancers. Since the rapid expansion of fracking in 2007-08, people have filed hundreds of lawsuits against the energy industry. Yet state regulations prohibit localities from restricting fracking and medical professionals from reporting illnesses that they suspect resulted from exposure to fracking chemicals.

Representatives of the energy industry and politicians claiming to represent landowners who seek to lease land for drilling are challenging the commission’s decision. Some claim the action amounts to an illegal confiscation of owners’ mineral rights. The American Petroleum Institute Pennsylvania asserts that the DRBC’s decision “ignores a robust regulatory system and strict industry standards that ensure the environment, public health and local communities are protected.” (Philadelphia Inquirer, Feb. 25)

Their “robust regulatory system and strict industry standards” are an illusion in Pennsylvania. Four years under the Trump administration have decimated federal environmental regulations.

The commission’s ruling occurred just as the energy industry is experiencing a glut in natural gas production. This glut began in 2012 and worsened during the COVID-19 pandemic.

To offset overproduction, industry proponents pushed for converting natural gas into the production of plastics, but most of these efforts have been cancelled or delayed. Yet in 2020, the Pennsylvania legislature passed another $667 million tax credit to entice more petrochemical facilities. (DeSmogBlog, Feb. 11)

The promise of jobs and other financial benefits for local communities has long been used to promote fracking and for the construction of pipelines to bring fossil fuels to distribution centers. Yet a new report released by the Ohio River Valley Institute (ORVI) just two weeks before the DRBC ruling exposed the job-creation hype.

The ORVI studied 22 counties in West Virginia, Pennsylvania and Ohio that comprised 90% of the Marcellus Shale natural gas production. The study found that counties with the most gas fracking production ended up with weaker job and economic growth than other parts of the region and the U.S. as a whole.

Jobs across the U.S. expanded by 10% between 2008 and 2019; yet in Ohio, Pennsylvania and West Virginia, jobs only grew by 4%, even though the natural gas industry ran at full capacity. “More glaringly, the 22 gas-producing counties in those three states — ground zero for the drilling boom — only experienced 1.7% job growth.”

The ORVI report found that air, water and noise pollution has negatively impacted the health and environment of residents. People had higher rates of asthmas, skin rashes, heart failures, premature births and birth defects. In terms of job and population growth and share of national income, these regions fell behind the rest of the country.

While it costs a lot of money to frack one natural gas well, most of the income goes to the shareholders who invested in the process. Contrary to the claims of those who promote gas and oil fracking and pipeline construction, this is not a job-intensive industry.

The DRBC has set an example that must be extended throughout all regions impacted by fracking. Ban fracking now!