Some younger Workers World Party members met Rubin Kanowitz for the first time when he was a communist elder, still confronting cops on recent demonstrations chanting, “Black Lives Matter.” Older ones knew him from when he first joined the party in 1965. All grieved as they learned he died this Jan. 26 at the age of 89. 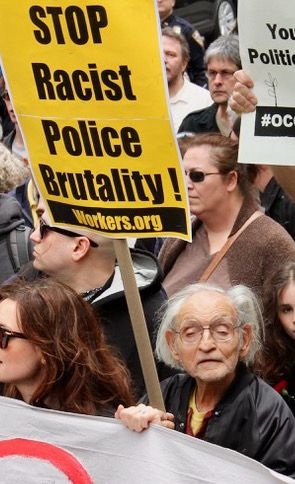 We knew this bad news was likely once we heard that Rubin and his spouse Joyce Kanowitz, also a party member for 56 years, were hospitalized after testing positive for COVID-19. Joyce survived. Rubin returned to his home and died with loved ones present, within restrictions the pandemic has imposed.

Most stays for hospitalized COVID-19 patients are horribly lonely. Rubin’s ever-present optimism and open solidarity with all the essential caregivers and housekeeping staff won friends and led to one wonderful moment: A Filipina nurse, who is a leader in the BAYAN USA movement, recognized him as a WWP militant and made his day by singing “The Internationale” for him. Working-class internationalism lives.

Like almost any WWP comrade with 50-plus years of party work, Rubin wrote articles, made political talks and took part in thousands of street demonstrations, rallies, political meetings, fundraising socials, headquarter cleanups and childcare sessions — to some of the children, he was a favorite uncle. And birthday parties! Rubin was at all of them, as he treasured the morale of individual comrades as much as he hated the crimes of the ruling class.

That he managed to stay active in the streets until he was nearly 90 is further proof that revolutionaries never retire from their real profession. If they’re lucky, they can leave the “day job.” Rubin had been an economist.

In the mid-1990s, Rubin took on a new political task. WWP First Secretary Larry Holmes said this about Rubin’s activities in that period:

“President Bill Clinton pushed through a reactionary welfare reform bill in 1996. The reform bill placed limits on how long workers could receive welfare and forced millions of poor workers, mostly women, to work for their small welfare payments, which was tantamount to being forced to work for subminimum wages. These were workfare workers.

“Rubin helped to organize Work Fairness, an organization of workfare workers. The reform forced these workers to go to hearings before an administrative judge. The hearing aimed to find an excuse to discontinue their benefit payments. Rubin would accompany the workers, acting as their lawyer.

Some of Rubin’s day jobs were on Wall Street. As you might imagine, it was an unpleasant environment for a professional revolutionary. He was in the midst of the very people whose class rule he yearned to overthrow.

Like all of human history, our lives too are filled with contradictions, including our jobs. Contradictory benefits of a Wall Street job are that: (1) you learn what the class enemy is like up close; (2) you see their weak points; and (3) you are able to help fund the organization to fight them, in this case WWP. Rubin did all three, and he and Joyce were generous to their party as well as their family, friends and comrades.

They were especially supportive of the Black Liberation struggle. Even before we in WWP met him, Rubin was active in the Civil Rights Movement. Later, in the mid-to-late 1960s, Rubin and Joyce hosted fundraising socials at their apartment near Grand Army Plaza in Brooklyn. One such social was for the Deacons for Defense and Justice, which organized armed self-defense of Black communities in the Deep South.

Rubin’s connection to WWP began in January 1965, when the women of that Brooklyn neighborhood, including his spouse Joyce, made sandwiches to support a struggle for Black community control of the schools. Then President Lyndon Johnson escalated the Vietnam War, which accelerated everyone’s political development. Before long, they and others of their Brooklyn neighbors had joined the Party.

Perhaps the real influence setting Rubin’s lifetime course was his childhood in Brooklyn’s East New York neighborhood in the 1930s and 1940s, which he often talked about. He may have worked some years on Wall Street, but his roots in that community’s immigrant proletariat nourished him. And he never strayed. One might say he came full circle.

As comrade Shelley Ettinger wrote, Rubin “had the Party’s back, was all in for the Party and for the struggle, at all times. He was an anti-racist, anti-Zionist, working-class, old, communist, Jewish comrade. He gave it his all.