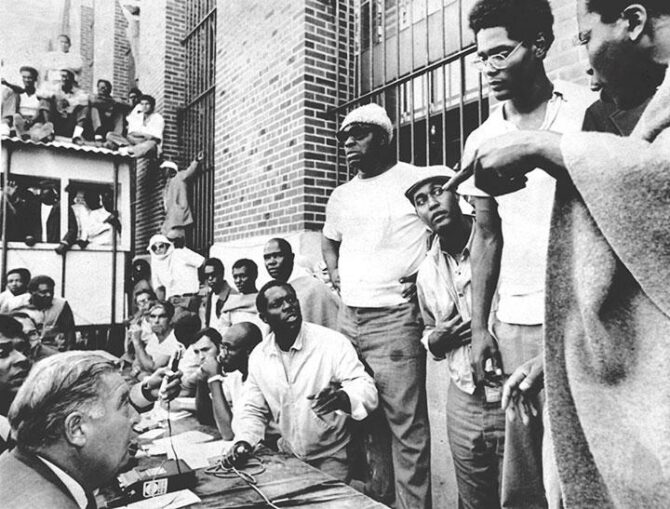 L.D. Barkley, second from the right, and other Attica rebellion leaders negotiating with prison officials, Sept. 1971.

This year marks the 50th anniversary of the Attica Prison Uprising. The following slightly edited excerpt is from the book “A Time To Die: The Attica Prison Revolt” by the late New York Times writer, Tom Wicker. The original publication in 1975 was followed by 1994 and 2011 editions. Wicker was a member of a negotiating team invited by the prisoners to help present their demands to the public from Sept. 9-13, the day that then New York Gov. Nelson Rockefeller ordered state police officers and prison guards to open fire for six minutes slaughtering 29 unarmed incarcerated workers and 10 guards taken hostage. Russell Oswald was New York’s Commissioner of Correctional Services.

One of those massacred was L.D. Barkley, who had emerged as an important spokesperson for the rebellion, whose role is described in the excerpt below.  Barkley was a brilliant example, similar to the martyred George Jackson, of evolving into a revolutionary activist and leader behind the walls at a young age. Barkley, like so many of his fellow Attica comrades, was tragically never allowed to realize his revolutionary potential but his inspiring words and actions will live on.

Elliot James Barkley was 21 years old, a tall Black from Rochester, New York, with a history of drug use. Convicted at 18 for cashing a forged money order for $124.60, he had been sent to the Elmira Reformatory for four years. Paroled in January 1970, he rejoined his family, who were rated good people in the Black community of Rochester; but then he was picked up for driving without a license, a violation of parole.

For that, he was sent to the maximum security prison at Attica where — although he was in no real sense a leader — he became a well-known exercise-yard orator. When D-yard was or­ganized after the uprising, Barkley and Richard Clark were elected to represent A-block inmates.

“Barkley was more close to me than any of those I’ve mentioned. Primarily because he’s younger and the fact that I relate to younger people more readily than older ones, because of the fact that I figured if I had had someone to tell me the things that I know now, perhaps I would have looked at life differently earlier.  So I tried primarily to reach out for the younger element.

“[B]arkley and I used to read. I gave him law books. I tried to get him involved in law. He was an excellent reader. He would read; he would have an appetite for reading that was tremendous. He would come and get books from me to read, and then we’d sit down and discuss it. [B]eing that he was young and inexperi­enced, books — I tried to explain to him — were just an outline of life. You had to actually live life; you couldn’t live like out of a book. The book gives you the diagram for life, the outline, and you fill in the rest for yourself. . . .

If Russell Oswald did not know L.D. Barkley — no one in Rochester or in Attica seems to know how Elliot James Barkley became known as “L.D.” — when Oswald first entered the D-yard stronghold, he surely did when he emerged from it for the second time that Thursday night, Sept. 9. Barkley, with television cameras carrying his image and words to the world, again presented the inmates’ “immediate de­mands.” More than that, with his reedy voice, his youthful face and “granny glasses,” his fiery manner and words, he conveyed the anger, the frustration, the determination that everyone who entered D-yard sensed in the inmates — at least among their active and articulate leaders.

“We have composed this declaration [L.D. began] to the people of America to let them know exactly how we feel and what it is that they must do, and what we want, primarily, and not what we — what someone else wants for us. We’s talking about what we want.

“[T]here seems to be a little misunderstand­ing about why this incident developed here at Attica, and this declaration here will explain the reasons.

“The entire incident that has erupted here at Attica is not a result of the dastardly bushwhacking of two prisoners Sept. 8 of 1971, but of the unmitigated oppression wrought by the racist administrative network of this prison throughout the year. We are men! We are not beasts and we do not intend to be beaten or driven as such.

“The entire prison populace — that means each and every one of us here — has set forth to change forever the ruthless brutalization and disregard for the lives of the prisoners here and throughout the United States. What has happened here is but the sound before the fury of those who are oppressed.

“We will not compromise on any terms except those terms which are agreeable to us. We call upon all the conscientious citizens of America to assist us in putting an end to this situation that threatens the lives of not only us, but of each and every one of you as well.  We have set forth demands that will bring us closer to the reality.

Russell Oswald, hearing all this from a few feet away, decided L.D. Barkley was a “pure revolutionary.”