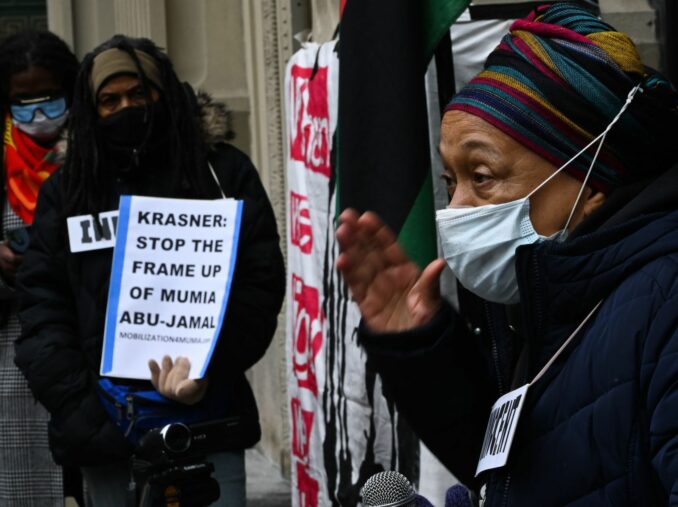 On less than 24 hours’ notice, more than 40 people came out on Feb. 15 to show their opposition to a Feb. 3 legal brief by Philadelphia District Attorney Larry Krasner, a so-called “progressive.” It denies Mumia Abu-Jamal the right to prove his innocence in court.

A member of the Black Panther Party as a teenager, and a justice-seeking journalist known as the “Voice of the Voiceless,” Abu-Jamal was falsely convicted of murder by the racist injustice system almost four decades ago. He was summarily condemned to death row.

Supporters have waged a dedicated U.S. and international campaign to liberate Abu-Jamal ever since. Current efforts focus on getting a new hearing that might bring to light any evidence kept out of his trial and subsequent appeals.

There certainly is new evidence. DA Krasner and his office staff were actually the ones who found six hidden boxes of exculpatory evidence that expose former prosecutorial misconduct in Abu-Jamal’s case.

Mumia’s lawyers will respond with their own legal brief to State Superior Court in the coming weeks.

A statement issued by Mobilization4Mumia to the rally said in part that “Following in the steps of Lynn Abraham, Ron Castille, Seth Williams and other notoriously corrupt DAs” Krasner’s 125-page brief “puts a seal of approval on the outrageously racist actions of [the original trial] Judge Sabo…. Instead of considering all the evidence that has been gathered since the 1981 trial, Krasner is basing his line of arguments on the fabrications and lies that helped to unfairly convict Mumia in the first place…. Krasner’s office is refusing to acknowledge that the similar charges of misconduct his office used in exonerating 18 other innocent men also apply to Abu-Jamal’s case.”

The rally was held defiantly and directly in front of Krasner’s workplace and his plate glass window emblazoned in gold with “Office of the Philadelphia District Attorney.” Among those speaking was Pam Africa, minister of confrontation for the MOVE organization and a central activist in the uncompromising International Concerned Family and Friends of Mumia Abu-Jamal. A carload of supporters from New York City joined Philadelphia supporters in holding signs and banners and listening to speakers for two hours, despite frigid weather.