Solidarity with the struggle of 5,800+ Amazon workers in Bessemer, Ala., to unionize continues to grow, following the heroic lead of this majority-Black workforce fighting for justice on the job. 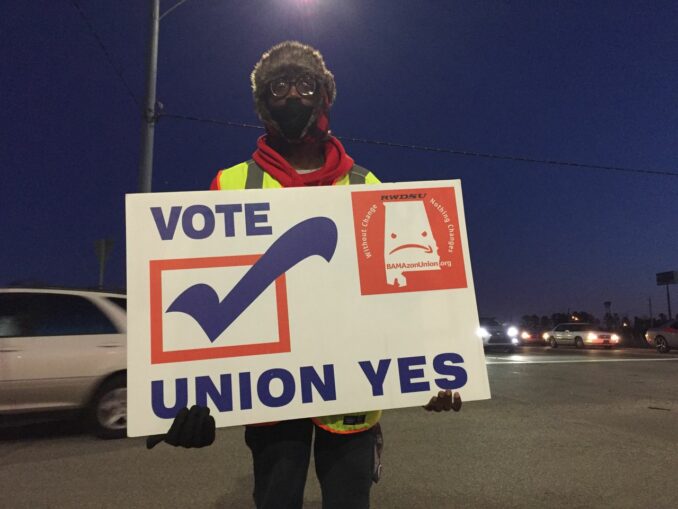 Walking the Powder Plant Road approach to the Amazon warehouse in Bessemer, Ala.,where a union drive is underway by the majority-Black workforce.

On Feb. 12, the recently initiated Support Alabama Amazon Union campaign brought organizers in Bessemer and over 300 solidarity activists together, including Amazon workers from many locations. In a dynamic organizing meeting titled “How Can We Support the Bessemer Alabama Workers’ Union,” leaders from unions and rank-and-file members, community supporters and even a U.S. Congress member discussed this critical struggle and made plans for the February 20 National Day of Solidarity with Bessemer Amazon workers.

How the union drive began

The meeting opened with Josh Brewer, head organizer of the #BAmazon Union Campaign with the Retail, Wholesale and Department Store Union, who discussed how the campaign started and what it meant to workers in Bessemer. 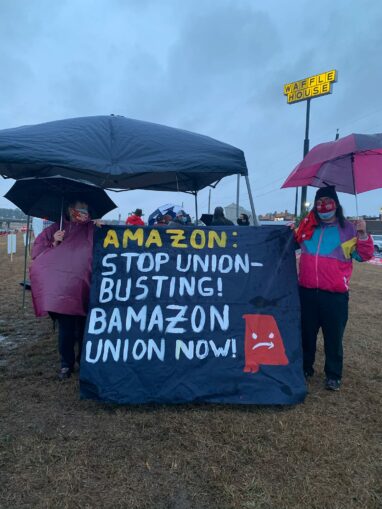 Supporters from Massachusetts to Louisiana, Georgia and Florida travelled to a Feb. 6 BAmazon rally in Bessemer, Ala., including these two Workers World Party members.

“We started October 20th — well, we really started last summer. We were reached out to by a group of workers that had some concerns. Basically, there were some more generic concerns in the way of wages and benefits and treatment. But there were also some alarming concerns when we started talking about the ability to use the bathroom, when we started talking about being punished for having COVID, not having their COVID pay given to them. Management and human resources were simply disregarding their cries or their complaints. …

“This campaign is as important as folks believe it to be. These workers are mistreated as much as you are hearing. This is a very real campaign. It’s very much a fight that we’re in. . . . Amazon has had two months worth of time to have captive meetings with these workers against their will and to use this information and the ability to twist that information from [professional anti-union consultants] that they’re paying $3,000 a day for.”

Michael “Big Mike” Foster, another critical lead organizer for RWDSU, gave more insight on the campaign: “We didn’t just show up at Amazon. The workers from Amazon called us; because they have been crying out with their voices, and Amazon has ignored them the whole time. So we got together with the group, and we put a plan together to come out here and help these people. And it has turned into amazing things … 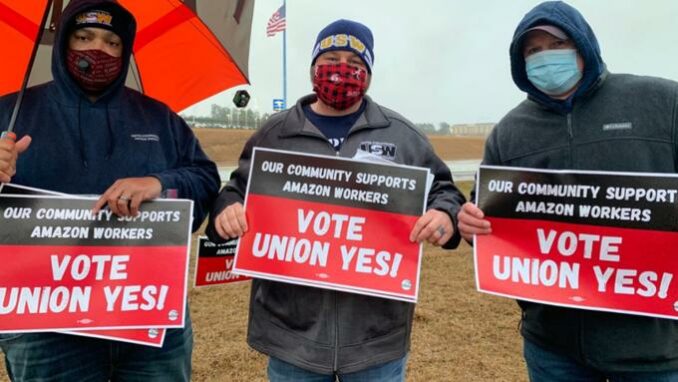 In the rain at the support rally for Bessemer Amazon workers, Feb. 6.

Dante Strobino, an organizer with the Southern Workers Assembly, a network of dozens of Southern labor and community organizations, discussed why the SWA initiated the call for the February 20 National Days of Action in solidarity with Bessemer.

“With 55 to 60% of all Black people living in the South — in Bessemer City, 85% Black workers — we know that this has been a region that has historically been unorganized. And organized labor needs to use this opportunity to finally defeat the anti-union right-to-work laws, the Jim Crow bans on collective bargaining like we face in North Carolina.

“But seeing poultry workers like Brother Big Mike and others that are supporting these workers, you being unionized and helping to support others in this major corporation to unionize, shows that this rank-and-file initiative is going to be victorious. We have confidence that you’re going to win this union vote. But whether you win it or not, we know that is just one stage in this fight and in building and maintaining the rank-and-file organization to act like a union and to keep fighting.

“We’ve been building these local workers assemblies to bring together worker activists, unions, communities, to organize other unorganized. And you’re doing it, you’re showing what a workers assembly can do, bringing together organized workers to organize other unorganized workers. Particularly we know the most oppressed Black workers are always going to lead, have historically led this.”

Monica Moorehead, a WW managing editor and editor of the 2007 book, “Marxism, Reparations and the Black Freedom Struggle,” spoke on the historical significance of this union drive.

“Now, fast forward to what is happening in Bessemer with another historic development that is also majority African American and almost half of them women. And that is the union drive to organize the Amazon warehouse.

“As a Black woman whose roots run deep in Alabama soil, I’m here to pledge my solidarity with the Bessemer workers’ right to unionize, because they are not only fighting for their rights but for the rights of millions of workers globally. And the whole world will be watching.”

Actions on Feb. 20 and beyond

Comments came from Chris Smalls, a former Amazon worker fired for leading a walkout of Staten Island Amazon workers in protest of COVID-19 workplace conditions, and from Megan Murray, a former Whole Foods employee and organizer in the Whole Worker campaign in Philadelphia. They spoke to the abusive tactics of Amazon management and the need to support Bessemer workers.

This electrifying organizing meeting shows how deep the solidarity is with Bessemer Amazon workers and how labor and community can work together to make union drives into mass movements. The meeting ended with over two dozen reports on Feb. 20 solidarity actions, which have grown to include over 30 cities. For a complete list of actions and to get involved, visit supportamazonworkers.org.