The amount of farmland in the United States has been in steady decline for most of the 21st century. While roughly 40% of the country’s land area remains devoted to agriculture, 14 million acres of farmland were lost to ecological devastation or development between 2012 and 2017. (American Farmland Trust) At least 2 million additional acres have been lost every year since then. (U.S. Department of Agriculture) 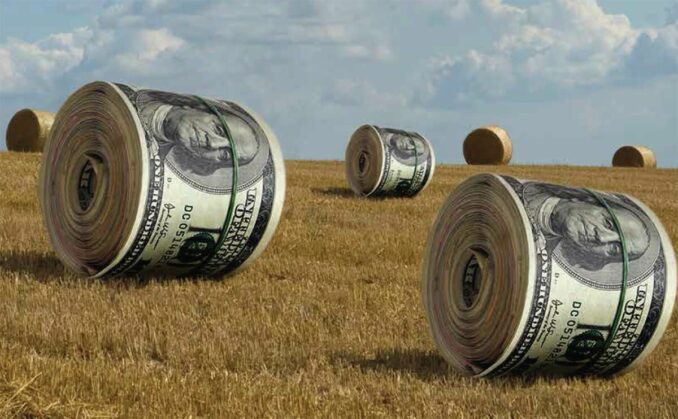 And farms are closing at an alarming rate, with 5,800 closures in 2018 alone. Black farm owners have been hit the hardest. Since 1920, over a million Black families have lost their farms (Guardian Aug. 15, 2019), and they now constitute less than 2% of all farm owners. A 2019 Center for American Progress study found the USDA “has a long and well-documented history of discrimination against Black farmers. The unequal administration of government farm support programs, crucial to protecting farmers from an inherently risky enterprise, has had a profound impact on rural communities of color.”

Yet despite the fact that both the number of farms and the overall acreage of farmland is plummeting, the average farm size is actually on the rise. How could this be? It’s because of the consolidation of ownership into fewer private holdings. It appears that the billionaires are snatching up farmland as fast as they can.

This year, it was revealed that the largest private owner of farm-assessed property in the U.S. is now Bill Gates. According to the Land Report, Gates owns 243,000 acres of farmland in Louisiana, Arkansas, Nebraska and Arizona, as well as smaller holdings in 14 other states.

The other biggest private landholders in the U.S. include the Offutt agricultural dynasty — whose patriarch Ron Offutt is the richest man in North Dakota — with 190,000 acres; Stewart and Lynda Resnick, billionaire owners of Fiji water, Halo oranges and POM juices, with 190,000 acres; reactionary Cuban sugar plantation barons Alfonso and José Fanjul, with 160,000 acres; and the J.G. Boswell Company, with 150,000 acres.

Average farm size, according to the USDA, is 444 acres. These five landholders own approximately 933,000 acres of U.S. farmland. By comparison, Manhattan island is less than 15,000 acres. The consolidation of farmland ownership is an alarming development with repercussions for the entire working class, especially with the implications of the capitalist state’s deadly negligence around the COVID crisis.

Nearly a half million agricultural workers have contracted COVID-19, but according to the National Center for Farmworker Health, “this figure likely underestimates the number greatly, since it excludes contracted and temporary labor. No comprehensive national or industry-wide testing or reporting of positive COVID cases among agricultural workers is being systematically conducted.”

Despite the fact that 95% of farms are owned by white people, most farmworkers are Black and Brown, with 75% of farmworkers born in other countries. Black farmers have faced long-term discrimination from the USDA in allocating loans, disaster payments and assistance. Half of all farmworkers do not have legal permanent residence in the U.S. (National Agricultural Worker Study, 2019)

It must be recognized first and foremost that all land in the American continents was stolen from Indigenous people by European colonizers.

Capitalist development and settler colonialism have always led to ecological destruction. A century ago, the U.S. faced a massive pandemic. A decade later, it faced one of its worst ongoing natural disasters — the Dust Bowl, which devastated parts of six states in the southern Great Plains. (tinyurl.com/y2x66697) That period of unnatural dust storms, which were caused by the banks forcing farmers to practices that damaged the soil, led to famine, respiratory illness, a mass exodus west to California and water shortages. This, in combination with the 1929 financial crisis, defined the suffering of the Great Depression.

Unless the working class rises up to defeat capitalism and imperialism once and for all, a new era of untold devastation and misery will fall upon us.