Tens of thousands of Haitians took to the streets of Port-au-Prince on Feb. 7 in numerous small, very militant and angry demonstrations demanding that President Jovenel Moïse follow the constitution and leave office on Feb. 7, when his term expires. Protesters want an end to corruption and an accounting of the more than $2 billion that Moïse and his cronies stole. 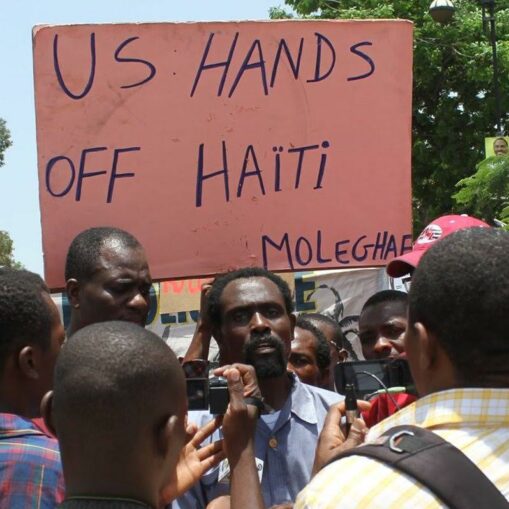 The U.S. State Department made it clear that while it agreed that Moïse has another year in office as president, the U.S. wants him to organize a few elections. He hasn’t taken the steps needed to do so. This led to the terms of almost all the members of parliament, mayors and other elected officials expiring, forcing them out of office.

A general strike called by the Collective of Haitian Unions for the Respect of the Constitution of 1987 (COSHARCO), held Feb. 1 and 2, was exceptionally effective. The cops estimated that 90% of the economic activity of Port-au-Prince was shut down; videos show high school students playing soccer on the main boulevards of Haiti’s capital.

Twitter reports from some of Haiti’s other major cities show that the strike was well respected outside the capital.

Videos on France 24 and Al-Jazeera show how angry and tenacious the protests have been. In one incident, the crowd was burning a U.S. flag when a patrol of cops showed up. There was a face–off in which the demonstrators backed away but didn’t disperse, some hiding in alleys and yards. The cops decided to leave, but first directed live fire into the crowd as they piled onto their trucks.

In another video, a protester with a bloodstained bandage on one arm and a club in the other hand explained that he was going to stay in the streets until Moïse respected the constitution and revealed where the money was.

In a third incident, protesters caught a bodyguard for one of Moïse’s ministers, who had been trying to infiltrate a march and get close to one of the opposition’s local leaders. The bodyguard managed to get away, but the local leader charged that the PHTK (Parti haïtien tèt kale), the governing party, was running an assassination program.

The opposition is charging that the Moïse regime is behind armed gangs which have attacked whole neighborhoods that don’t support the government, burning houses, looting, stealing, kidnapping and killing.

A number of protest demonstrations supporting the opposition have occurred in the Haitian diaspora, especially around Miami and in Quebec. They have pointed out that Moïse is doing what Trump attempted: trying to stay in power.

Moïse had 23 people arrested on Feb. 7, including a police inspector and a supreme court judge, charging they were planning to kill him and carry out a coup.

The opposition parties take the position — supported by the U.N. — that Haiti can solve its problems through elections. On the other hand, many popular organizations in Haiti, like Kolektif Anakawona, Batay Ouvriye, and MOLEGHAF (Mouvement de Liberté, d’Égalité des Haïtiens pour la Fraternité, led by David Oxygène), have denounced the reliance on elections.

These groups reject the intervention of the U.S. and the NGOs in Haiti. Oxygène characterized the current conflict as a struggle for position, meaning electoral office, rather than a class struggle for power. He called instead for system change.