Bessemer, Alabama, sitting on the outskirts of Birmingham and with a population of 26,500 — about 75% African American — has become a central focus for the entire class struggle. 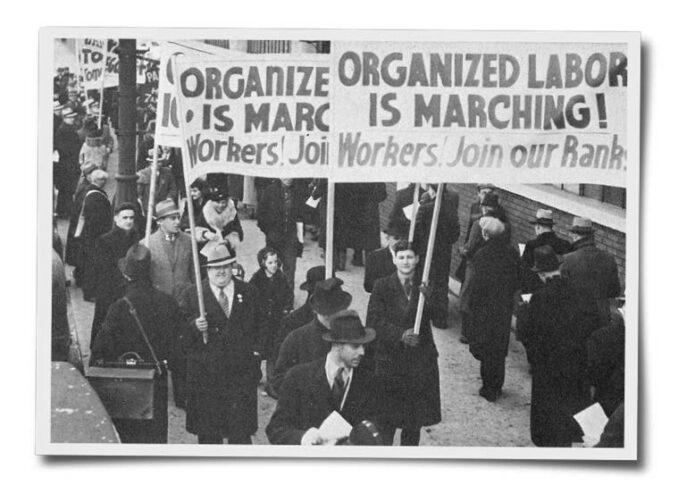 Solidarity with the Flint Sit-down strike inside GM plants

There, at Amazon warehouse BHM1, thousands of workers are fighting for a union. Over Amazon’s strident objections, the National Labor Relations Board is conducting a union representation election by mail. From Feb. 8 until March 29, workers will mail in ballots indicating if they want representation by the Retail, Wholesale, and Department Store Workers Union, which is affiliated with United Food and Commercial Workers.

Not only is this African American majority workforce up against the world’s richest human, Amazon CEO Jeff Bezos, they are facing off with the second-largest company in the U.S. — and the ninth largest in the world. Amazon, including Amazon-owned Whole Foods, has 1.37 million workers in the U.S. alone. This does not count delivery drivers. Amazon has the highest market capitalization — based on stock value and number of outstanding shares — of any corporation anywhere.

Amazon brags on its web site that its workers make $15 an hour — a recent concession to the mass low-wage workers movement, Fight for $15— and have health benefits. Bessemer has a poverty rate of 25%, and 19% of residents do not have health insurance. Alabama is one of 21 states that still have a minimum wage equal to or below the federal minimum of $7.25 an hour.

Given that, landing a job at Amazon could seem like a lucky break. But the pay is not enough to support a family in 2021. Moreover, $15 an hour doesn’t even come close to the value Amazon workers produce for CEO Bezos, whose wealth is expanding at a current rate of $2,537 per second!

Working conditions, described as “back-breaking,” are unbearable. Cameras and spy software developed by Amazon itself are used to monitor worker productivity, bathroom breaks and any kind of “data relating to human movement, location and environment,” the company boasts. Employees are monitored for union advocacy.

Amazon — which markets its monitoring device, the Modjoul SmartBelt to other companies — claims it is designed “so you can prioritize areas of focus for safety and productivity.”

This is a flat-out lie. “In 2019, Amazon recorded 14,000 serious injuries across its fulfillment centers, which equates to an injury rate of 7.7 serious injuries per 100 employees, Reveal found. That’s nearly double the most recent industry standard, according to Reveal. Amazon may also be underreporting warehouse worker injuries.” (cnbc, Sept. 29, 2020)

Now, less than a year after the Bessemer warehouse opened last March, at least 2,000 Amazon workers there have signed union cards, enough for the NLRB to order an election.

There are historical parallels between the current struggle and an earlier period of fierce class battles: the 1930s. The world’s largest corporation then was General Motors, whose president, Alfred P. Sloan, was the world’s highest-paid executive. Workers were monitored by GM’s elaborate network of company spies. Supporters of the United Automobile Workers hid their union buttons under their collars.

The conditions on GM’s assembly lines were not that different from Amazon. One of the main issues motivating the fight for UAW representation was the notorious “speedup” — when management would repeatedly make the moving assembly run faster to increase production. Wealthy companies were united in their opposition to unions. They hired mercenary goons from the notorious Pinkerton union-busting outfit.

Organizers in the newly formed Congress of Industrial Organizations recognized the key to future success: A win at GM would have a domino effect, inspiring successful union drives in a range of industries. But it would not be easy to get GM to do what it swore it would never do: recognize a union. It took a 44-day occupation of GM plants in Flint, Mich., to force the company’s hand.

Feb. 11 marks the 84th anniversary of the victory in the famous Flint Sit-down Strike. In 1937, there were over 500 sit-downs and other strikes involving workers in steel, meatpacking and other plants, along with retail, hotels and the public sector. After the Flint workers won, the CIO unions grew exponentially, bringing into the labor movement industrial workers whom the conservative, craft-based American Federation of Labor had written off.

Among the workers not welcome in the AFL were the Black steelworkers of Bessemer. It took the Communist Party-led Mine, Mill and Smelter union to organize the mills in the Deep South. Black southern steelworkers were an important part of labor history in the 1930s. Even today union consciousness is high in Bessemer.

Amazon has launched a glitzy propaganda website, “Do it without dues,” aimed at getting Bessemer workers to vote against union representation. There is fear and intimidation; a majority-yes vote is not guaranteed.

Once union representation is won, the battle has just begun. Next comes the fight to win a decent contract. A strike might be necessary, and union supporters might be fired. Amazon could threaten to close the warehouse, as Walmart has done when stores were organized.

The drive to organize Amazon is comparable in importance to wresting the first union contract from GM in 1937. Tactically there are differences between a secret ballot election and a strike, whether an outside picket or an occupation. But the class essence is the same: labor vs. capital.

Thus the struggle begs the question raised in the famous old union song: Which side are you on?

What is most needed is mass, global solidarity. None of us is very far from an Amazon warehouse or a Whole Foods store where we can put up a solidarity picket line. A Feb. 6 support rally is planned in Bessemer.

The stakes in the current battle could not be higher — with ramifications for Amazon workers everywhere and ultimately for the global working class. Amazon BHM1 workers need to know that the international working class has their back. That will tip the scales and help them win against the richest centi-billionaire in human history.