From the perspective of the world’s youth, U.S. imperialism has been waging war on Iraq their entire lives. Iraqi children born the same year as the start of the Gulf War, who should be approaching their 31st birthdays, were killed by U.S.-imposed sanctions or bombs. This 30-year war shaped the political consciousness of an entire generation.

U.S.-Iraqi relations since 1990 are not those of two neighboring states disputing a border. It is an ongoing atrocity an empire is committing against an oppressed nation. It’s Washington’s project to dominate West Asia.

As the Soviet Union collapsed, so did the counterweight deterring imperialist encroachment against its neighbors. U.S. strategists seized on this opportunity to reconquer former imperialist colonies. Their primary goal in Iraq was to control oil resources and establish permanent bases, from which to launch military campaigns across the region.

Washington first laid the groundwork by instigating chaos and weakening local sovereign powers. To prolong the bitter Iran-Iraq War from 1980 to 1988, which claimed over a million lives, the U.S. sent weapons and cash to both sides.

Two years after that conflict ended in stalemate, the U.S. sent contradictory messages through its diplomats to Kuwait and Iraq, ratcheting up tensions while encouraging the Iraqi government to invade its neighbor to the south.

As soon as Iraqi troops crossed the border, “the trap was sprung,” wrote military analyst Manilo Dinucci in Workers World on Jan. 21. “The United States — which had been preparing the war for some time, observing with military satellites the deployment of Iraqi forces and identifying the targets to be hit — formed an international coalition that sent a large army of 750,000 troops to the Gulf under the command of the U.S. General Norman Schwarzkopf.”

This massive mobilization and devastating bombing campaign carved out a new foothold for the U.S., placing bases in Saudi Arabia, and, in the words of President George H.W. Bush, “the Gulf crisis will go down in history as the crucible of the new world order.” 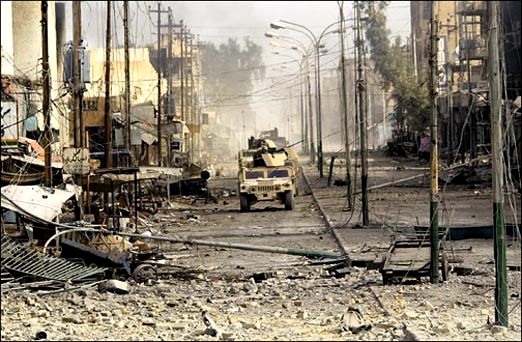 For the next decade, U.S. sanctions and bombings killed 1.5 million Iraqis, including 500,000 children. When questioned about this genocidal policy, Secretary of State Madeline Albright said, “We think the price is worth it.”

The George W. Bush administration concocted the pretext for the next phase of reconquest and launched a full-scale invasion. Washington falsely claimed Saddam Hussein had coordinated with the planners of the Sept. 11, 2001, attacks on the World Trade Center and the Pentagon and was additionally stockpiling chemical weapons — so-called weapons of mass destruction. Both claims were false.

The U.S. began bombing Baghdad on March 19, 2003, targeting the area around the Presidential Palace. Over 200,000 U.S. and British soldiers swept through the country, seized the Palace, established a three-square-mile “Green Zone” in the capital and prepared for permanent occupation.

The military occupation established a puppet regime that privatized the institutions of the Iraqi state, including health care and education. They disbanded the Iraqi Republican Guard. They eliminated the institutions that kept Iraqis employed during the twelve years of sanctions.

Overnight, thousands of workers lost their only form of income. A policy known as “De-Ba’athification” imprisoned Ba’ath party members or purged them from the remaining state institutions — even those with nonpolitical jobs that required party membership, like teachers.

Various resistance forces attempted to seize control of the country’s resources and hold onto some semblance of a sovereign state. U.S. occupation troops crushed them with brute force, imprisoned thousands of Iraqi workers and inflamed divisions among workers along ethnic and religious lines.

U.S.-armed death squads roamed in areas that resisted the occupation. U.S. soldiers and mercenaries committed untold numbers of atrocities. Occupation forces used so much radioactive depleted-uranium ammunition, especially in the Basra area, that children are still being born with deadly birth defects to this day.

Another million Iraqis died in the years after the 2003 invasion. Western capitalists controlled Iraq’s oil fields. Hundreds of thousands of foreign soldiers patrolled the new colony.

The U.S. shifted colonial headquarters from the “Green Zone” to a newly constructed embassy complex, the largest in human history. The U.S. occupation had succeeded in erecting a massive military fortress bigger than the Vatican, right in the heart of West Asia. By 2009, 16,000 soldiers and diplomatic staff worked at the U.S. Embassy in Baghdad.

Amid this chaos, the so-called Islamic State (I.S.) emerged. The administration of President Barack Obama used the I.S. as a pretext to resume regular air strikes, while tacitly directing I.S. fighters towards Syria in an attempt to exacerbate the civil war it had instigated there. But after years of bloodshed, a collaborative effort on the part of Iraqis, Iranians, Hezbollah and the Syrian Army finally beat the I.S.

Although there are many fewer occupation troops than at the peak, the U.S. still has a force of about 2,500 active duty combat soldiers in Iraq and 4,000 staff at the U.S. embassy fortress. The Department of Defense employs over 6,000 “security contractors” in addition to the combat soldiers. These contractors are notorious for committing war crimes against the people of Iraq and as mercenaries are paid handsomely for it — as much as $22,500 a month.

At the height of its strength in the mid-20th century, the Iraqi Communist Party was the largest in the region. But despite being the longest continuously existing political party in the country, the party was severely repressed by the Saddam Hussein Ba’athist regime.

In the aftermath of the 2003 U.S. occupation, the ICP drew significant criticism for participating in the U.S.-backed client regime. In recent years, there are signs of a new opposition as Iraqi communists have formed a coalition — with supporters of Shia cleric Muqtada al-Sadr and the Youth Movement for Change Party, among others — which won more seats than any other grouping in the parliamentary elections of 2018. 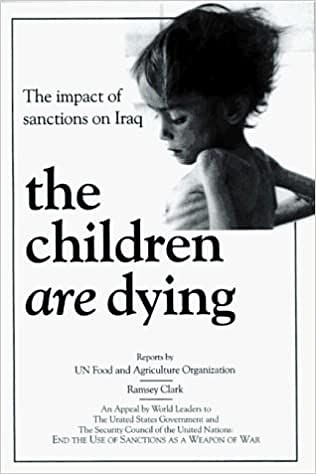 International Action Center published this book on the crime of the U.S. sanctions on Iraq.

On Dec. 31, 2019, Iraqi protesters stormed the U.S. Embassy fortress in response to air strikes that destroyed weapons depots belonging to militia groups in Iraq. Protesters’ successful breach of the embassy was a tremendous show of coordination and popular force and was a symbolic victory demonstrating a new spirit of resistance against the occupation.

Days later, the Trump gang ordered a drone attack, killing popular Iranian general Qassem Soleimani and an Iraqi militia leader on Iraqi soil. Soleimani was a decisive figure in the defeat of the I.S. Millions of Iraqis and Iranians marched in protest and took to the streets to commemorate Soleimani’s funeral.

Javad Zarif, Minister of Foreign Affairs for the Islamic Republic of Iran, said in an interview (posted on Facebook) that the criminal assassination of such a respected figure marked a permanent turning point for the U.S. military presence there: “The United States has to wake up to the fact that the people of this region are enraged, that the people of this region want the United States out.”

People’s China is another important ally of the Iraqi people through its Belt and Road Initiative. Since the COVID-19 pandemic, the price of oil crashed, and Iraq’s economy contracted by 12%. Iraq’s state oil company struck a $2 billion deal this month to supply the Chinese oil company ZenHua with crude petroleum for five years at a premium price and allows the Iraqi state to determine the logistics and timeline for the exchange.

One day, the Iraqi people’s revolutionary struggle for national self-determination will drive every last occupying soldier out of Iraq. The U.S. working class has a role to play in this fight by waging our own revolutionary struggle to make it impossible for the capitalists to keep up this colonial project and to disarm the bourgeoisie and dismantle their war machine.

Simply put, the U.S. working class and the Iraqi people have a common enemy in the U.S. imperialist regime. The same system whose police murder Black children in the streets of Philadelphia sent its troops to murder Iraqi children in Fallujah, Basra, Mosul and Baghdad.