Jan. 21 — On Biden’s first full day as president of the U.S. empire, activists and community members here wasted no time in putting pressure on his administration. At a demonstration called by Workers World Party-Buffalo, people gathered at the corner of Niagara Street and Porter Avenue to voice their demands. 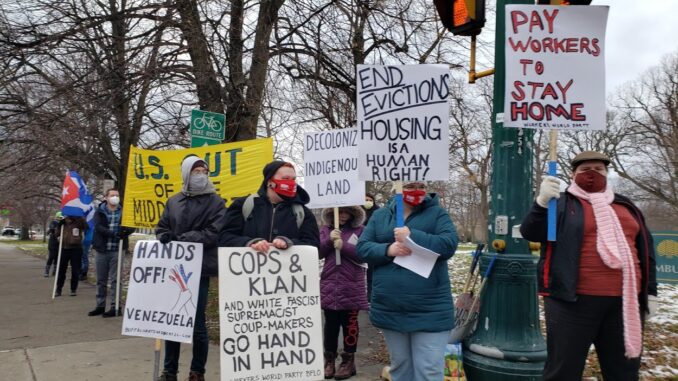 Activist David Louis spoke of the need for protesters to stop asking Biden for change and instead organize for the change we want ourselves — highlighting the fact that many basic demands for equality have been raised for hundreds of years, and neither major political party has acted on these changes.

Demands raised today included ending all wars and sanctions, ending the blockade on Cuba, closing prisons and abolishing ICE and the police, immediate COVID relief for workers, Medicare for All, paid sick leave, cancellation of rent and student loan debt, the end of all fracking and oil pipeline construction, and free unrestricted access to abortion.

Based on Biden’s 40 year record, it’s clear the Biden administration will not proactively fight for measures that would benefit the working class. Any substantial gains desired by workers and oppressed peoples will need to be fought for as hard as they were fought for under Trump — if not harder.