At an Amazon warehouse in Bessemer, Ala., 5,800 workers have won the right to vote for union representation. The National Labor Relations Board has authorized a mail-in election starting Feb. 8, with ballots due by March 29. 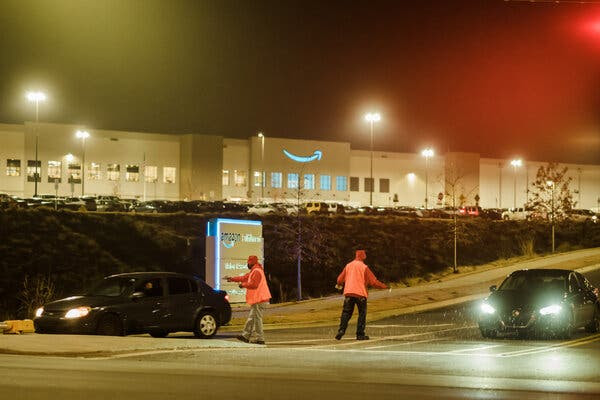 Union organizers talk to workers at 4:30 a.m. outside the gates of the Amazon warehouse in Bessemer, Ala.

If a majority of workers vote yes, their victory will be a historic moment in the struggle of U.S. low-paid, part-time and gig workers against sharpening capitalist exploitation. The campaign by Bessemer workers in their “right-to-work-for-less” state is comparable in its potential to the epic union organizing of General Motors — then the world’s largest corporation — in the 1930s.

A win in this “right-to-work-for-less” Taft-Hartley Act state would establish the first-ever U.S. union within the world’s largest online retail company owned by the world’s richest centi-billionaire. Jeff Bezos. As of January 2021, Bezos’ net worth is $190 billion, according to the Bloomberg Billionaires Index.

Amazon is seeking to delay and obstruct the vote. The company appealed NLRB authorization of a mail-in election and is demanding workers vote in person — despite a COVID-19 positive test rate exceeding 20% in surrounding Jefferson County. (bnnbloomberg.ca, Jan. 22)

Bessemer — located next to Birmingham — is an impoverished former steel-producing town, where one-quarter of the people live in poverty. It is a majority Black city, with a 75% African American population. (worldpopulationreview.com)

The BAmazon Union, as local organizers dubbed it, seeks recognition as a local of the Retail Workers and Department Store Union. RWDSU has a significant Southern membership, with 6,000 in the Mid-South Council based in Birmingham.

Alan Grant, an RWDSU organizer, said in a Facebook message that response to the organizing drive has been “incredible.” He described the union authorization card as being about “dignity, respect and fair treatment.” The NLRB stipulates at least 30% of workers in a unionization drive must sign cards for the Board to authorize an election.

Some two dozen unionized workers from nearby warehouses and poultry plants have strengthened organizing efforts at the warehouse. Michael Foster, a poultry plant worker, says: “I am telling them they are part of a movement that is worldwide.” By late December, more than 2,000 workers had signed cards indicating they wanted an election, the union said. (NY Times, Jan. 25)

Why Amazon workers want a union

The website emphasizes: “We face outrageous work quotas that have left many with illnesses and lifetime injuries. With a union contract, we can form a worker safety committee and negotiate the highest safety standards and protocols for our workplace.” (bamazonunion.org)

Amazon is especially vulnerable to organized labor action during the current pandemic. Increased online shopping makes warehouse workers more essential than ever — and gives workers more leverage and incentive to organize against the bosses. Amazon can’t stockpile packages, since a strike or job protest would spell disaster for its “instant shipping” promise.

But Alabama has a militant tradition of worker organizing, especially by Black workers. From 1928 to 1951, the Communist Party USA organized throughout Alabama — from the Sharecroppers Union to the Metal Workers Industrial League. (Workers World, “Lessons of ‘The Hammer and the Hoe,’” Dec. 21, 2017)

On Jan. 25, the National Football League Players Association, the union that represents more than 2,000 NFL players in the U.S., endorsed the BAmazon Union drive.

BAmazon Union’s Facebook page shows that its organizing energy is spreading to other Amazon workplaces in the South. One post read: “I shared your latest video with some local Amazon workers I know who are pro-union here in Kentucky. This country needs strong unions. Now more than ever!”

It is critical to show solidarity with Alabama’s Amazon warehouse workers — and with Amazon workers organizing globally!