Henry “Hank” Aaron may not have played the same historical role as the great Jackie Robinson, who broke the color line in Major League Baseball in 1947, but “Hammerin’ Hank”  achieved remarkable records that continue to stand the test of time. Plus his legacy has transcended the sport he played for 25 total years. 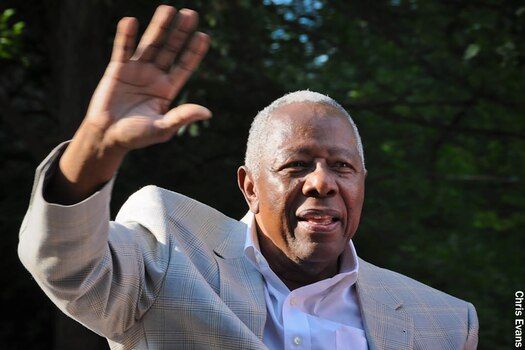 Aaron played in the all-Black Negro Leagues until he joined MLB’s then-Milwaukee “Braves” that won the 1957 World Series and eventually moved to Atlanta. That same year, Aaron was named the league’s most valuable player. He was a 25-time All-Star before he retired in 1976. In 1982, he was inducted into the Baseball Home of Fame with the second highest percentage of votes ever, after Cobb.

But even with all these great accomplishments, this incredible ballplayer faced tremendous racist backlash, especially as he approached breaking the 714 home-run record of the legendary New York Yankee, Babe Ruth. Aaron, who experienced racism firsthand growing up in Mobile, Ala., received 3,000 letters a day for almost a year, dripping with horrendous racist venom including death threats against him and his family.

These white supremacists could not stomach the fact that a Black ballplayer was about to rupture the most storied record in baseball, held for almost 40 years by arguably the greatest MLB home run hitter of all time — who happens to be white.  When Aaron broke Ruth’s record on April 8, 1974, the white MLB Commissioner Bowie Kuhn was not present in the stands — an insult — for this historic feat.

As Aaron was running the bases after breaking the record, two young white men ran on the field. Luckily it was to pat Aaron on the back and congratulate him. They could have easily been two racists who might have caused him great physical harm or worse. Why was there not security organized for him, given the duress he was enduring for months?

Twenty years after his home run feat, Aaron admitted to a Black sports columnist, William C. Rhoden, “April 8, 1974, really led up to turning me off on baseball. It really made me see for the first time a clear picture of what this country is about.  My kids had to live like they were in prison because of kidnap threats, and I had to live like a pig in a slaughter camp. I had to duck.

“I had to go out the back door of the ballparks. I had to have a police escort with me all the time. I was getting threatening letters every single day. All of these things have put a bad taste in my mouth, and it won’t go away. They carved a piece of my heart away.” (New York Times, April 1994)

But Aaron never feared political controversy. According to CubaNews, “Aaron visited Cuba in 1996 and witnessed a game between Pinar del Rio and Industriales of the Selective Series that year, at the Capitán San Luis stadium, and fraternized with the players of both teams.” (Jan. 22)

How best to honor Aaron’s legacy?

As of 2020, less than 8% of MLB players are African American compared to 57.5% white and 32% Latinx. In 1978, there were 27% Black players. There have only been 15 Black general managers in MLB history. One explanation given for this huge discrepancy was in a tweet from ESPN’s Howard Bryant: “Every Black manager ever hired in MLB history has been an ex-player, which means every successful Black candidate has first needed to have been one of the 750 best players in the world.” (Jan. 7)

The numbers are even worse when it comes to the National Football League, where at least 75% of the players are African American. Yet out of 30 teams, there are only two Black head coaches — the Pittsburgh Steelers’ Mike Tomlin and the Miami Dolphins’ Brian Flores. There is one Latinx coach, the Washington Football Team’s Ron Rivera, and the New York Jets head coach Robert Saleh is of Lebanese descent.

Sports under capitalism mirrors the rest of society, which is riddled with all forms of inequality, especially racism. And just as it took mass struggle to change the team names and eliminate racist mascots that degraded Indigenous peoples in Washington and Cleveland, it will take even more struggle to achieve similar concessions from Aaron’s Atlanta team and the Kansas City “Chiefs” football team.

The women and men players from the National Basketball Association led the way in fighting racism this summer. They refused to play in playoff games to protest racist police brutality following the shooting of Jacob Blake in Kenosha, Wis., which left him paralyzed.