An unprecedented 25,000 National Guard troops from 50 states plus thousands of local and Capitol police are expected to occupy the U.S. capital by Jan. 20. This armed force’s announced goal: Prevent a violent attack on the inauguration of the 46th president and allow a transition to the Joe Biden/Kamala Harris administration. Exit Trump. 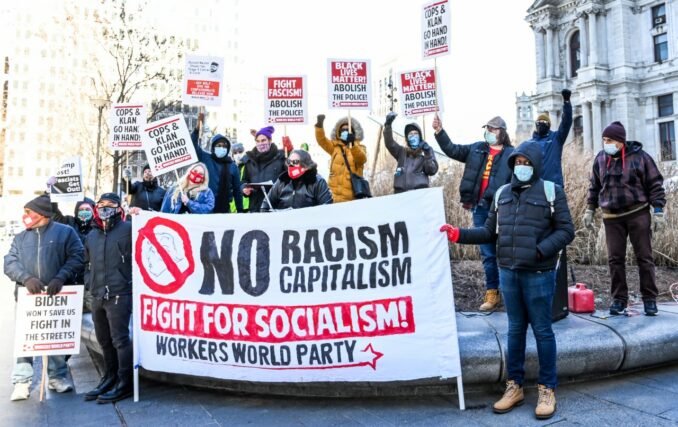 Despite its disorganization and defeat after three hours, the Jan. 6 pro-fascist assault on the Capitol sowed terror in Congress and shocked the public. It aimed to stop the certification of the presidential election and keep Trump in office. The attack had his blessing, giving it the earmark of an attempted coup.

The lack of punishment on the spot, the apparent collaboration by elements in the state apparatus with the fascists and the vast publicity the assault drew — all stoked credible fears that an even bigger attack might be launched during the inauguration.

Now, leading up to Jan. 20, two forces confront each other. Both forces are repressive, and both serve the interests of the property-owning imperialist ruling class. Yet they must be distinguished from each other.

One side is the “legal” power of the state apparatus — military, police, courts, prisons. The other is the “extralegal” paramilitary armed force of dozens of militia and fascist organizations, gathered under the banner of Trump and united by their extremist ideology of white supremacy.

On the outside of this internecine confrontation is a third force: the working-class movement, including Black Lives Matter, migrant, union, women’s, LGBTQ2S+, environmental, disabled, youth and all other popular movements.

This popular movement can be courageous and bold and win enormous support, as BLM did last summer. At this moment these sectors are mostly unarmed. They have united in their mutual opposition to Trumpism.

Let’s take a closer look at the class forces confronting each other.

Reports from Washington describe the National Guard and police preparations as setting up a “Green Zone.” U.S. occupation forces in Baghdad used the same name for the area of the Iraqi capital containing the mammoth U.S. Embassy and other official buildings.

In Baghdad’s Green Zone, U.S. troops set up auto crossings, used cement barriers to prevent truck bombings of buildings, carried out continuous surveillance and prepared for battle in an attempt to prevent attacks by the Iraqi resistance. The Green Zone was part of a war zone; it was part of U.S. imperialism’s occupation of Iraq.

The biggest force on hand in Washington, D.C., is the National Guard. According to extensive media reports, the FBI, Secret Service, Capitol and Metropolitan police forces play a supplemental role. Federal and local police agencies have been investigating and arresting people identified as participants in the assault on the Capitol.

While Congress managed to certify the election at around 3:45 a.m. Jan. 7 — after reconvening following the assault — nevertheless 147 Republicans voted against certification. That so many Republicans stayed with Trump’s Big Lie about the election results indicated he still had substantial ruling-class support, despite the revulsion voiced in most establishment media.

In the next week, however, many ruling-class institutions abandoned Trump, even those who had previously supported him. The Wall Street Journal, the National Association of Manufacturers, Deutsche Bank (a source of loans for Trump’s businesses) dumped him, and some Republican politicians jumped ship.

Social media monopolies like Facebook and Twitter cut Trump off from direct media appeal to his base. Corporations and foundations which have supported Republican candidates financially promised to cut off funds from those who voted against certification.

On Jan. 12, the eight generals who make up the Pentagon’s Joint Chiefs of Staff signed and sent a public letter to all 1.3 million members of the U.S. military. The statement condemned the “violent riot in Washington, D.C., on January 6, 2021,” called on all troops to avoid extremism and made the Pentagon’s position clear: “On Jan. 20, 2021, in accordance with the Constitution, confirmed by the states and the courts, and certified by Congress, President-elect Biden will be inaugurated and will become our 46th commander in chief.”

Sending the message to all troops indicates that military leadership takes seriously the fact that veterans and a handful of active duty troops were in on the Jan. 6 attack on Congress. Since the Army is 40% people of color and the National Guard 25%, the generals fear that exacerbated racist animosity will wreck their force’s cohesion.

Figuratively, ruling-class forces had a vision of a QAnon leader wearing horns (or even someone with orange hair) directing their fortunes. Most agreed that was a bad idea.

A great majority of local police around the country have supported Trump. Some individual cops participated in the assault on Congress, and many people with fascist ideology look to or are recruited by the police. While police officers are part of the legal state apparatus, they are susceptible to fascist and especially racist ideology.

On Jan. 6, the leading fascist forces included the Proud Boys, the Oath Keepers, Boogaloo Bois (whose stated goal is to spark a racial civil war), assorted militias and some open KKK and Nazis — a replay of Charlottesville, Va., August 2017. They carry weapons to protests, invoking the Second Amendment. Most groups’ ideology is a mix of misogyny, xenophobia, anti-Semitism and anti-communism/socialism, but the main theme uniting them is white supremacy.

Since 2017 the QAnon cult, which joined the fascists in the Capitol on Jan. 6, has become a mass phenomenon. It targets politicians and business leaders, mostly establishment Democrats, accusing them without evidence of those kinds of unspeakable crimes that arouse mass revulsion. QAnon looks to Trump as their champion, and he thanks them for their support.

On Jan. 6, the president and his sleazebag cronies unleashed this hatred-driven mob on their rivals — including House Speaker Nancy Pelosi, other Democrats and even Vice President Mike Pence, whom they considered a traitor. The Trump cabal did this with the tacit support of a majority of Republican members of Congress, who were lined up to oppose Biden’s certification.

The outgoing president’s urging played a key role. Hard-core fascists might be willing to take risks; they are ten times more willing if a U.S. president orders them to. That’s a tacit promise of impunity. And for the thousands there who were not as hard-core, the presidential push was enough to bring them along to support those ready to rampage.

What made it vintage Trump was that he promised he would join the march, but didn’t. He considers the rioters “low-class” trash.

What formed a perfect storm was the collaboration of the Capitol Police, whose leaders refused to prepare its defense. Even after Rep. Maxine Waters urged and questioned them on Dec. 31, they did little. Without their usual overwhelming might managing this protest, some police fraternized with the fascists. Others “did their job” protecting Congress.

The result: fascists killed one cop, cops killed one attacker, three others died, including one attacker the fascists themselves trampled. Capitol Police Chief Steven Sund and others under him have since resigned.

Those who incited the assault, like Trump and Rudy Giuliani, did so knowing that a crowd storming the Capitol might injure or kill their political opponents. Not to mention that a frenzied white-supremacist and misogynist mob might lynch any person of color they got their hands on — for example, the young progressive and outspoken women of color representatives of “the Squad,” like Alexandria Ocasio-Cortez, who rightfully feared such a threat.

This type of pogrom has happened before in U.S. history, when KKK-led mobs deposed local governments where Black people held office, such as in Wilmington, N.C., in 1898. (tinyurl.com/y48n8pma)

Unlike a military coup to put a junta in power or choose a new executive, the Jan. 6 assault needed only to stop the certification of Trump’s loss. It was similar to the U.S.-backed coups in Yugoslavia in October 2000 deposing Slobodan Milosevic and in Ukraine in February 2014 evicting Victor Yanukovich — both based on unproven claims of election fraud, both occurring with a Democrat in the White House.

Similar fascist assaults intimidating politicians in Georgia, Pennsylvania and Arizona could have canceled the votes of cities with many African American and Latinx voters, reversed Biden’s victories and reelected Trump. In a phone call, the outgoing president had tried earlier to push Georgia’s Republican secretary of state to “find the votes” he would need to erase his loss there.

It looks like Trump will have to leave on Jan. 20, and he may face another impeachment trial in the new Senate.

On Jan. 20 it is likely the massive presence of National Guard troops will discourage any mass fascist mobilization. However, the fascist movement can still recruit and take action far away from military concentrations.

The crisis in capitalist society that fuels the growth of fascist and other irrational ideologies among the masses shows no signs of abating. COVID-19, the cyclical capitalist crisis after the pandemic has calmed — if that happens — and the climate crisis all threaten political stability in the center of world imperialism. The U.S. continues to lose prestige and power worldwide.

To rely on the state’s repressive forces to stop a fascist upsurge in a growing crisis is to disarm the working class — which includes all sectors of people who depend on selling their labor power to survive — leaving it vulnerable.

Assuming a smooth transition to the Biden/Harris government, the working class and people’s rights organizations of all nationalities and genders must wrestle with how to organize self defense against fascism, independent of the state apparatus. We encourage all groups to take the necessary steps.

The movement must find ways to directly appeal to the rank-and-file troops of the National Guard and the Army to encourage anti-fascism and their refusal to turn their guns on the peoples’ movements. The stronger the popular movement grows and the more decisively it acts, the better it can win over “undecided” persons and neutralize those tempted to join the fascists.